Using the multi-output version of a software instrument lets you send the different sounds from a multitimbral virtual instrument, such as a drum kit, to individual channels in Logic's mixer for separate processing.

Multi-output instruments are a powerful weapon in your Logic arsenal. Here's how to use them...

When using virtual instruments, most of the time we simply want to place an instrument on a track and then send its output to the stereo mix. But in the case of a multitimbral instrument, sending each part to its own track means that different plug-in effects or EQ can be added to the various elements as required. For example, in the case of a virtual drum instrument, we might want to put different effects on different drums. In Logic Pro X, this is easily achieved, but only once you know how.

The Drum Machine designer instrument makes life particularly easy in this regard, as it is preconfigured as a Track Stack. All you need to do is click the disclosure arrow in the track header on the Main arrange page, and all the various parts drop down beneath it with their names already added. At the same time, separate channels appear in Logic's mixer, again labelled according to the drum voice they control. Not only does this open up the opportunity to use different processing on each drum part, but it also means levels and pans for each voice can be adjusted in the mixer, rather than having to open the plug-in window. Note that the original track fader will still function as a master level control for the whole kit, and you can still insert global plug-ins onto that track to affect the kit as a whole.

If you want to do this with a Drummer track, it should be instantiated as a multi-output instrument at the outset, rather than as stereo. To see the various parts in the mixer, locate the small -/+ boxes at the bottom left of the Mixer channel strip and then press the + box repeatedly to add as many outputs as you need. These will then come up as Aux tracks routed to the mixer's stereo output, and for Logic's own instruments, the various parts will be named for you. If you want to see these parts as separate tracks in the Main arrange window, right-click on each Aux in the mixer and select 'Create Track'. 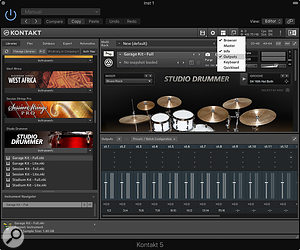 To view the available outputs in a multi-output instance of Kontakt, you have to enable the Output window in the menu at the top.There are a few more steps if you want to use a third-party instrument such as NI's Kontakt, but the principle is much the same. In fact the Logic Pro X side of things is exactly the same, but you have to make some adjustments within the plug-in. Again instantiate the instrument as multi-output — some instruments give you several choices of output configuration, so pick the one you need. In this case, let's go for the 16-output version of Kontakt.

Now select the Output icon in the Kontakt window, which displays the output channels. To see all 16, click 'Add Channels' then enter 16 as the Quantity. Number of channels should be left set at 2 if each output is to be stereo. Add your instruments within Kontakt and then open Logic's mixer. Kontakt increments the MIDI channel for each instrument added so you don't need to do that manually.

The procedure for creating additional Aux tracks in Logic's mixer is the same: use the + button at the bottom right of the channel strip to add as many Aux channels as you need, then right-click on each Aux and select Make Track if you need to see these in the Main arrange window. This time you'll need to name the parts yourself; the original track carries instrument output 1/2, the first Aux 3/4 and so on.