Sonar’s ‘native’ loop format, the Groove Clip, uses the same technology approach as Sony’s Acidized clips and Apple Loops. However, Sonar also supports the REX (ReCycle Export) clips created by Propellerheads’ ReCycle program. Acidized files and REX files have many similarities, but also many differences. Ideally, one could use the same techniques with both — and fortunately, there are ways to come very close to treating REX files as you would Acidized ones. (For simple REX file playback applications, I needn’t repeat myself; check out an article with details about the DropZone and RXP REX file players from the March 2009 issue of Sound On Sound at http://sosm.ag/mar09–sonar.)

Each format has various strengths and limitations. One issue with REX files happens when you speed them up, and a sample’s slice lasts longer than the time allotted for it. This can create a click at the end of the REX clip, although it may not be apparent at some tempos. Another issue is that unlike Acidized/Groove Clip files, key information isn’t embedded into the clip. Thus, REX clips ignore the pitch markers that change transposition on the fly for Groove Clips.

Some programs circumvent the click issue by adding a short decay to each slice upon importing a REX file; others provide a decay for the last slice so it’s not cut off abruptly. Logic gives the option to convert to an Apple Loops clip upon import — which, like Sonar, means that once converted you can change pitch in real time (although the clips will likely need editing for best results). Sonar does none of these ‘automatic’ options, but offers multiple tools that allow you to get around REX file limitations, as well as augment what they can do.

You can get around the clicking problem by adding a short fadeout (a few milliseconds) at the end of the clip. The limitation is you can’t ‘roll out’ the clip for multiple iterations without cancelling the fadeout, so you have to copy and paste the clips instead. Sonar’s Paste Special function can expedite this, because you can specify any number of repetitions starting at any point in the project. If you don’t plan to roll out clips a lot, this is the fastest option. Note that a ‘fast out’ fadeout curve is usually the optimum fade shape.

You can also simply convert the REX file to a Groove Clip. This works best if the project tempo has been established and won’t change. Bring the REX clip into the project, then play it back and note its native pitch (ie. its key) — we’ll need this info later. Next, add a short fadeout as described above and make sure this eliminates the click. Then, choose Clips / Bounce to Clip(s) to convert the clip from a REX file to a conventional WAV file. Now select the clip and type Ctrl+L to turn it into a Groove Clip. (If the clip length doubles when you do this, double–click on the clip to open the Loop Construction window, then enter half the number of beats in the Beats field.) Now you can roll out the clip as many times as you want.

Converting REX files to Groove Clips may seem like a panacea: Sonar adopts the REX file’s slice markers, and converts them to transient markers for Groove Clip files. However, changing tempo or pitch may degrade the fidelity, because Groove Clips will require additional editing to optimise stretching. REX files also tend to retain higher fidelity when slowing down a clip from its native tempo. If you know how to do Groove Clip optimisation you can tweak it for better results, but doing so requires a combination of art and science.

Alternatively, you can use one of Sonar’s REX file players. I know someone who bought Reason so he could ReWire it into Sonar and use Reason’s Dr Rex file player — he didn’t realise Sonar already had three REX file players! While some of Sonar’s soft synths have been around long enough that they’ll qualify as ‘vintage’ soon, ignore them at your own peril, as some offer very flexible ways to work with REX files. Note that using a Simple Instrument track isn’t a good idea though, because you’ll likely want to access the MIDI track driving the instrument.

The RXP File Player, DropZone, and Dimension Pro all handle REX files similarly. Start by dragging the REX file into the instrument. Playing C3 plays back the loop at its native pitch, whatever that pitch might be. You can transpose up in semitones to B3, and down to C2. C4 plays the loop’s first ‘slice’, and each higher semitone plays the next slice in the loop. This is fun for rearranging slices in real time. 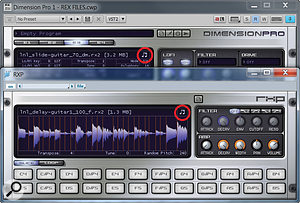 Drag these note symbols into a MIDI track and you’ll have an editable MIDI sequence for controlling the REX file slices.

RXP and Dimension Pro also display a note symbol; if you drag this into the instrument’s MIDI track, it creates the MIDI sequence that triggers the REX file’s slices in the correct order. Of course, you can shift these MIDI notes around and go nuts with re–arranging the slices, and like any MIDI sequence, it will follow tempo changes. You can also select the MIDI clip, type Ctrl+L, and turn it into a MIDI Groove Clip that you can roll out as desired.

Although DropZone can’t drag–and–drop the MIDI sequence, it can play back two REX files at once from one MIDI note. The main limitation is that the loops need to be same length if you want them both to play back in their entirety. If one loop is two measures and one is four measures, and the note is two measures, then it will play the first loop and the first half of the second loop. If the note is four measures, the first loop will stop after two measures but the second loop will play its entire length. 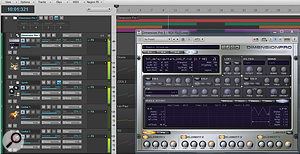 Dimension Pro is set up to play four REX files at once, as triggered by each REX file’s associated MIDI sequence.

Dimension Pro takes this a step further, as it can play back four REX files at once. In Dimension Pro’s options, choose Multitimbral so that MIDI channels 1–4 each control one of the files. Each element will have its own note that you can drag into its respective MIDI track, and all of Dimension Pro’s processing options can come into play.

When triggering with MIDI and using these instruments, if you play notes that last the length of the loops to trigger them, you’ll rarely (if ever) hear a click at the end — although you might if the note stops in the middle of a note in the loop. The same is true when using the MIDI sequence to trigger notes. If by any chance you do hear a click, try shortening the last MIDI note a tiny bit.

If you convert a REX file into a Groove Clip, it will respond to pitch markers. However, first you need to specify the clip’s native pitch, as all REX files default to G# when converted into Groove Clips. Double–click the clip to open the Loop Construction window, click on the Pitch button, then enter the native pitch in the Pitch field. Now set the project’s native pitch (Project / Set Default Groove Clip pitch). 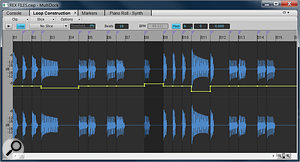 A REX file is being converted into a Groove Clip. Note that you can also change each slice’s pitch, level (shown by a yellow line), and pan — something you can’t do with ReCycle.

Transposing the notes in the MIDI sequence won’t transpose the pitch, but will instead play back the slices in a different order (which can also be cool... but I digress). So, the simplest way to do transposition via MIDI is to play notes within the range that allows transposing the loop (C2 to B3).

All of the instruments mentioned here can transpose the initial REX file so that its native pitch matches the key of your song. For Dimension Pro, use its Shift control; with DropZone, it’s the Root parameter and for RXP, the Transpose parameter. (Note that DropZone also has a random tuning parameter that if varied slightly can ‘humanise’ percussion sounds and, if varied considerably, can rid your studio of unwanted visitors.) These transposition options also provide an alternative to changing key with MIDI notes, because you can use automation to control the tuning. Note that the transposition engine in all these instruments is very good, and you may find the results better than changing pitch in ReCycle and then saving it as a new file but in a different key.

Lastly, it’s worth remembering that any synth–type parameters applied to the REX file will affect each slice. For example, if you reduce the decay, each slice will be more percussive. You can also apply filter envelopes and the like.