A typical sampling session. The three tracks cover the neck, bridge and combined pickups of my guitar. The top track shows the final samples, the middle track is a work in progress, and the lower track is the original sampled audio.

Sample your own instruments in Sonar.

Making your own sampled instruments can be more than just a fun pastime. For example, I like to play keyboard bass but sometimes prefer the sound of electric bass — particularly five-string basses — so I sampled one. And even though I play guitar, I like to sample guitar to be able to play entirely different voicings, as well as do tricks like map notes on the keyboard to create 12-string guitars that never go out of tune. Also, at times I’ve had temporary access to some interesting ethnic instrument, and sampling it gives a more permanent type of access.

Whatever the reason for sampling, I use Sonar because it’s well-suited for this task; however, most of these tips apply to other DAWs. We’ll use sampling guitar as an example.

Get It Right At The Source

You’ll be putting sampled sounds under the microscope, so you need to put a lot of care into recording them — and that includes preparing the instrument itself. When sampling bass or guitar, set the action high to avoid any potential fret buzz — you’re not playing the instrument, you’re sampling it. It’s nasty on the fingers but the tone is worth it (as are new strings, if you haven’t changed them recently).

Feed as much level as possible into your converters. Usually I like to leave a little headroom, but you want to squeeze out every last bit of signal-to-noise.

Recording at different dynamics (velocities) is tough, so a good workaround is to hit an instrument fairly hard. To emulate lower dynamics, you can tie a low-pass filter’s cutoff frequency to velocity so that lower dynamics cut back a bit on brightness. Also, increasing sample attack times with lower velocities can restore dynamics, as can adding a bit of a pitch increase with high velocities.

Pay attention to your environment. If you’re sampling a guitar with single-coil pickups, get far away from transformers and computers. With acoustic sounds, turn off the air conditioning and silence your mobile phone.

Monitor the input with a tuner. The one in Sonar’s own TH2 works fine, but I generally prefer the larger display and smaller overall size of TC Electronics’ Polytune plug-in.

Be sure to leave a space at the beginning and end of recording with only the signal-chain noise (eg. hum and interface preamp hiss). Once you’ve set the recording levels for a particular sampling session, don’t change them. This makes it easier to do noise reduction on all the files.

You’ll also need to play consistently, which isn’t always easy. With guitar, I often hit several successive notes before finally obtaining the most consistent note attack. It’s important to record all the samples in one sampling session: it’s difficult to obtain the exact same tone, attack and so on if you need to re-do samples later.

After recording, you’ll have files with lots of notes. Before initiating editing, I like to reduce any noise as much as possible. Most of the time I load iZotope RX4 into Sonar to provide noise reduction; prior to RX4, I used Sony Sound Forge’s noise-reduction tool.

This is why you want a silent section at the beginning — so that you can take a noise ‘fingerprint’ and subtract it from the overall signal — and also why you don’t want to change the recording level, because it’s difficult to remove noise from a signal with a varying noise level. Note that you can usually get away with applying much more drastic noise reduction to individual notes than programme material.

Next, you need to isolate the individual notes in the recording so you can save them for mapping across a keyboard. For creating the individual notes, three keyboard shortcuts are invaluable. Horizontal zoom in/out is one of them, because you want to be able to zoom in to focus on note attacks and decays, then zoom out to see the file as a whole. I’ve mapped them to the Page Up and Page Down keys.

Bounce to Clip will also come in handy (for reasons that will become apparent later), as will Normalize, because you want the notes to have the same level.

Here’s the typical workflow I use for cleaning up my samples:

1: Zoom way in on a note attack and split the file at the attack. Sometimes this requires a value judgment, like how much pick noise to include. I tend to favour a quick attack over including more of the attack ‘character’.

2: Zoom out and play the note. Split again just before where the note ends.

3: Repeat this until all notes are isolated, then delete all the irrelevant audio.

4: Apply trimming to each clip.

6: You now have an isolated series of notes. Select all, and zoom way in on one note’s attack.

7: Add a very short fade (a few milliseconds) with a slow fade curve to eliminate any click at the note beginning, and a somewhat longer fade (if appropriate) at the end with a fast fade curve. Because all clips are selected, adding a fade to one adds the same fade to all of them — which is great for consistency.

I prefer to ‘bake’ the fades into the notes, so I bounce each clip to itself. Do this individually with each clip, otherwise you’ll bounce all the clips back together into a single file.

Sample pitches have to be perfect, so expect to tweak them slightly. Because any pitch variations are likely to be small, pitch-correction options are very effective and should incur little, if any, degradation.

Note that with some samples, tuning is a moving target. For example, guitar strings often start off sharp, settle down to pitch, then waver somewhat. Bass strings flop around even more. Aim for the pitch to be accurate immediately after the initial attack.

Melodyne is surprisingly good at adjusting pitch. Just click Select All in the Melodyne window, set pitch and pitch drift correction to maximum, and you’re good to go... most of the time. Very rarely, Melodyne will not parse the pitch correctly. A more common problem is that, as a note fades out, Melodyne will lose the ability to ‘lock on’ to the pitch because the level is too low. Although the select-all method will often work, if different parts of the note correct differently, you can’t use Melodyne. 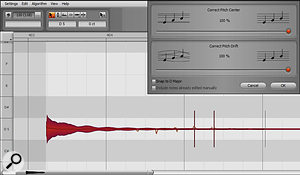 If you see vertical lines in the middle of notes, listen carefully after using Melodyne pitch-correction to make sure there aren’t any audible discontinuities.

If you see vertical lines in the middle of notes, listen to them carefully after using Melodyne to make sure there aren’t any audible discontinuities.

Another effective (albeit more time-consuming) method for ensuring accurate pitch is to use Loop Construction View.

Open the file in the Loop Construction View, and choose Clip / Stretch On/Off. In the Pitch cents window, enter the pitch offset. If you initiate play in the Loop Construction View, you won’t be able to see pitch in the tuner plug-in because it will be in a track’s FX Rack. However, if in Track View you place the cursor before the file and then start playback, you’ll see (and hear) the results of any pitch-change adjustments. Do not enable the Pitch button, however, as this causes a loop to follow the project pitch.

After correcting a clip’s pitch, bounce the clip to itself to make the pitch change permanent.

Despite all your efforts, some samples may not be suitable. One might be significantly shorter than an adjacent note, or have a buzz or other artifact. If ‘one of these notes is not like the other’, you have three main options. First, find a note which is either a semitone lower or higher, copy it, and then use Process / Transpose to change its pitch and replace the problematic sample. Note that using the transpose function often changes the attack so that it doesn’t start on a zero crossing; you’ll need to add a short fade-in.

Alternatively, load the copy into Melodyne and transpose the pitch up or down a semitone there. Or, you can use the Loop Construction View technique mentioned above to create the required semitone change.

With any of these methods, you can sometimes transpose over more than a semitone range yet still retain sound quality.

After all the files are done and clips have been bounced to themselves to make any changes permanent, you should name them — note that Sonar’s ‘Ipswich’ release introduced multiple clip export, which is great for this application. Select all your clips, do a mass export (choose Clips for Source Category), and now you have the raw materials to map to your sampler of choice.

What’s next? For information on how to create sample-based instruments using the Sonar’s SFZ file format, see: /sos/apr08/articles/sonartech_0408.htm.