To get the most from Avid's Structure sampler, you need to work with your own sounds. Here's how. 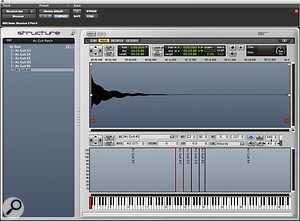 A basic Structure multisampled instrument made from individual samples of the open strings of an acoustic guitar.

I was presented with an interesting challenge just before Christmas. One of my clients had a late commission from BBC Radio 4 to produce a documentary on the anniversary of the one millionth Morris Minor car. The finale to the programme, which was transmitted on Christmas Eve, was to be a rendition of 'Jingle Bells' using only the sounds of a Morris Minor.

This was a challenge worth rising to, as I wanted to produce a better attempt than Top Gear had managed when they tried to recreate their theme tune using car sounds. In fact, their result showed me more about what not to do than what to do! Melody lines require sounds that have a very distinct note to them, and the engine sounds they used weren't sufficiently pitched, so you couldn't make out the tune very easily.

To start with, I did a test to check I could make my challenge work. Fortunately I had a number of Morris Minor sound effects in my 50,000‑plus sample library, so to check that I could use the horn as the main melodic instrument, I created a Session with an instance of Avid's Structure soft sampler and an audio track. I dropped the horn sound effect onto the audio track and cleaned it up, then dragged the region into an opened Structure window. I was able to pitch, fine‑tune and clean up the sample and play it. I found I could even use the same sample for a bass line; at that pitch the horn sounded more like a tuba, but kind of worked. Then to finish off the test I used some door samples to create the start of a Morris Minor drum kit.

Armed with that experience and with ideas for more sounds to collect, I was ready to start recording a real Morris Minor. We hung a hubcap from some string so we could hit it in a variety of ways; some had a definite ring to them, which could be used as another melodic instrument, while other hits would form the basis of the cymbal sounds for the drum kit. We found that the rear suspension made a lovely squeaking sound, and then recorded a selection of door, boot and bonnet opening and closing sounds for more percussion. Finally, of course, there was the horn — in fact, we recorded two different‑sounding horns with different pitches and tones. Back in the studio, I set about isolating and cleaning up the various sounds. I also learnt a lot about how to use Structure to sample, and that is what I am going to share with you.

My experiments showed that it was well worth getting the sounds as clean as possible before loading them into Structure. You can do this in a separate Pro Tools Session, or do as I did and have an audio track in the Session exclusively for managing samples. To demonstrate the basic sampling process and some useful tips, for now I am going to park up the Morris Minor and demonstrate the process using an acoustic guitar.

To recreate any pitched instrument, you should ideally have a number of samples at different pitches so you never have to stretch a sample too far — unlike my Morris Minor project, where I only had single notes!

My initial recording consists of a single region, containing each note of the guitar played in turn (plus a few mistakes!).In the first screen, below you can see that I have sampled all the open strings of a six‑string acoustic guitar. I had three goes at the 'A' string, including one at the end; there are some other little spikes where I touched a string, but these will be edited out when we cut this up into separate regions for each string. It's possible to do this manually, but there is a nice shortcut that will do them all in one go.

From the Edit menu, select Separate Region, and then from the sub‑menu, choose At Transients. Pro Tools will ask you how much 'pre‑separate time' you want. This is the amount of time by which Pro Tools will place the edit before each transient. I tend to go for five milliseconds to be safe. When you hit OK, Pro Tools will slice up the single file into separate regions. You will see that it has picked up some extra bits as well, so next it's worth losing the unwanted bits and naming the samples. In this example, I used Shuffle edit mode to delete the unwanted sections, as well as the duff A-string samples, then named each clean sample (including the note name, as this will help later)

Here I've used Pro Tools' Separate Region At Transients function, followed by some editing in Shuffle mode, to create a series of regions each containing one note..

Incidentally, at some zoom levels it looks as if Pro Tools has missed some of the transients and placed the edits after the start of the notes. This is a display issue in Pro Tools 8, and you can confirm there are no problems by zooming in and seeing that all is as it should be.

Now it's time to put the samples into Structure. If you haven't already done so, create a stereo Instrument track and insert an instance of Structure into one of the five insert slots. Structure will open with a default 'Sine Wave' patch — but personally I don't know why Avid put this patch in, as the first thing I do is remove it! (Click on 'Patch' and select Remove Patch from the drop‑down menu to do this.) Now we have an empty instance of Structure to put our new samples into.

The obvious thing to do is to drag the edited and named samples from the audio track into the Structure window, and this does work — nearly. However, there are some problems with this approach. In the screen below left 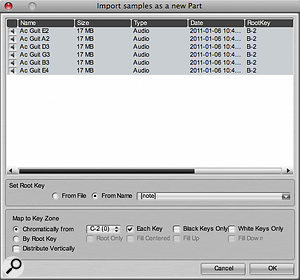 When I drag my regions into Structure from the Pro Tools Edit window, Structure can't pick up the root note from the Region name.I have done just that, but end up with problems relating to the root key, which is the natural pitch the sample was played at. Notice how the Root Key column in the table is set to 'B2' for all the samples: even with Set Root Key set to 'From Name', the Root Key isn't picked up. The reason for this is that Structure looks for key information in the file name — in this case 'Audio 1_11' — and not the region names. Even Exporting the File's Regions Definitions doesn't help.

To make this work, what you need to do is use Export Selected As Files from the Region List drop‑down menu and export each sample as a separate file with its proper name. Save them somewhere useful, and then drag those files from the Mac Finder or Windows Explorer into the Structure window. You'll see that this time Structure picks up the Root Key info from the file names 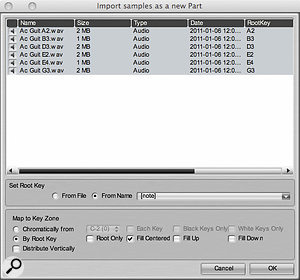 This time I've used the Export Regions As Files option in the Region List and dragged the files into the Structure window.. The next step is to configure the Key Zone section at the bottom. Tick the 'By Root Key' box and then choose how you want it filled. 'Root only' will assign the samples to their exact notes and leave gaps where there are no samples with notes allocated. In situations like this, where you don't have a sample for every note, you can choose the samples you do have to be assigned to all the notes up to the next sample (Fill Up) or down to the next lowest one (Fill Down), but I prefer Fill Centre so that no sample is stretched too far. Click OK and you'll be able to see what Structure has done. 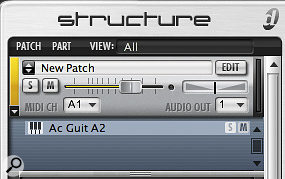 By default, Structure has named my patch 'New Patch' and the sub-patch after the name of the first sample. Editing these to something meaningful will help keep track of the project in the long run (below). 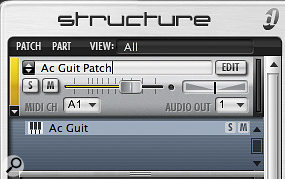 Click the little triangle under the yellow bar to reveal the sub‑patch information and you will see that Structure has picked up the name of the first sample, in this case 'Ac Guit A2'. It's worth renaming both the sub‑patch and the patch to help keep track of everything.

Click on the Edit button within the Patch box and the Structure window will change to Edit mode, as shown in the first screen. You can see from the keyboard section at the bottom of the window that it has spread out the samples around the root key and extended the bottom and top notes to cover the rest of the keyboard. With the mouse, you can put limits in if you want to restrict the range over which those two samples can play.

You should now be able to play your basic samples across the keyboard, but there is quite a bit more you can do to improve the way they play. Next month, we will look at how to improve the samples, and also how I built up my Morris Minor drum kit entirely within Structure.