Get the best possible results from AudioSnap in Sonar.

AudioSnap essentially folds Sonar’s pitch–transposition talents into an interface that streamlines what would otherwise require a lot of manual labour. However, like with drum replacement, Acidization and other ‘automated’ processes, you’re often relying on the computer to make judgment calls. Adding a little human intervention — like how you tweak transient markers on a Groove Clip, or correcting pitch only for notes that actually sound ‘wrong’ — can greatly improve the results. But there are also ways to make a process mostly about human tweaking, while still taking advantage of some automated elements.

Both Sonar Platinum (the artist formerly known as Sonar Producer) and Sonar Professional (formerly Sonar Studio) feature a refreshed AudioSnap with new detection algorithms and a more obvious interface. Paradoxically, although this improves its performance with automated processes, it also makes manual processing more efficient and, often, a better way to solve a particular problem. 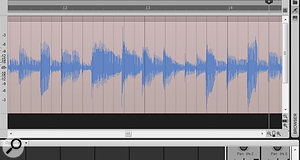 The original guitar part. The grid lines show eighth notes; several hits are ahead of the beat around measure 13.

Let’s assume an eighth–note rhythm guitar part. You want it to be rock solid, but don’t want to take all the life out of it through rigid quantisation. This is an ideal candidate for manually quantising only the notes that sound ‘off’.

For a rhythmic reference, in Track View choose View / Display / Vertical Grid Lines / In Front of Clips. Also, as we’re working with eighth notes, click on the drop–down menu under the Snap to Grid button, untick ‘Smart Grid’, and tick ‘1/8’. As you proceed, keep Snap to Grid enabled as the default. That lets you place the Now time on eighth notes, and compare the note attack to where the Now time falls.

Next, choose Audio Transients from the track’s Edit Filter. You’ll see transient markers superimposed on the track, but it may seem initially like Sonar was drunk when assigning their positions. To optimise the marker positions, open the AudioSnap palette by double–clicking within the clip (but not on a Transient Marker itself), then adjust the Average Tempo and Filter parameters. Note that these interact, so you may need to go back and forth a few times among the settings. Also, although the object is to minimise the amount of manual manipulation, you’ll almost certainly need to adjust some markers manually.

You can control the sensitivity of the Transient Marker detection via the Threshold, Resolution, and Average Tempo parameters.The Threshold control sets marker recognition by signal level. The lower the threshold, the more sensitive the algorithm and the more markers you’ll see. The Resolution parameter sets marker recognition by position. ‘All’ shows all detected markers, while choosing a rhythmic value restricts recognition only to those markers falling within a certain window of the selected rhythm.

Average Tempo seems to imply you’d want the same tempo as the project, but not always. A slower tempo than the project will reduce the number of markers, while a faster tempo will add in more markers.

Adjusting these parameters for the best results requires some experience, but if you work with AudioSnap, you’ll be able to come pretty close to optimum — and probably hit optimum with relatively simple material, like drums. Also, note that these don’t have to be ‘set and forget’ parameters. You can start off with a minimal set of markers and dispense with the major timing issues, then make another pass with greater sensitivity or higher resolution to clean up the details. 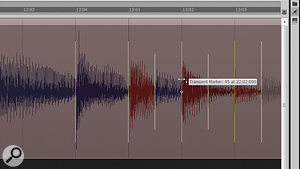 The notes around the start of measure 13 now land on the beat. Red waveforms have been compressed, while blue ones have been stretched. Dark colours indicate slight time–stretching; lighter colours indicate heavier time–stretching.To avoid affecting the non–marked eighth note, you would insert a Transient Marker in front of it by Alt–clicking where you want the marker. However, if the pattern is fairly continuous, it may be difficult to see the exact attack. To verify that you put the marker in the right place, right–click on the Transient Marker and choose ‘Audition Beat’. This loops and plays back only the audio between the Transient Marker on which you clicked and the subsequent one. If the marker isn’t at the exact beginning of the note, stop playback. Click in the middle of the marker (where there’s a small diamond) and the cursor turns into a four–way arrow. You can now tweak the marker’s horizontal placement.

How well AudioSnap works depends on the accuracy of the Transient Marker ‘map’. Although AudioSnap’s detection algorithm is improved, it still works best with percussive sounds like drum hits, guitar chords, piano, bass, and anything else struck or plucked so that there’s a strong transient. It’s worth taking the time to accurately quantify the starts of notes that you want to tweak the timing of, as well as where the notes end, so that stretching affects only the note(s) you want to affect. (This is very much like finding the correct transients to ‘slice’ clips when creating REX or Acidized files.)

When adjusting a Transient Marker, remember that the ‘N’ key toggles snap on and off. This is handy because you’ll usually want snap off when moving the marker to the note start (if the note’s on the beat, you don’t need to adjust it anyway), but then enable snap when you do the actual move.

Sometimes you’ll need to disable spurious markers, no matter how good you get at adjusting Average Tempo, Threshold and Resolution. For example, a marker might occur in the middle of a chord, and if you want to stretch or compress the entire chord the marker will get in the way. The reverse can also happen, where needed markers might have become disabled through Threshold or Resolution settings. In either case, right–click on the marker and tick or untick ‘disable’ respectively. You can also ‘promote’ a marker, again through the right–click context menu. This keeps the marker enabled regardless of the Threshold or Resolution settings.

If you listen back to your edits, you may be disappointed by the sound quality. Don’t panic! You’re in ‘preview’ mode, which trades off fidelity for speed. To take advantage of the iZotope Radius time–stretch algorithm, open the AudioSnap palette and choose an appropriate offline algorithm under Render Mode (Radius Mix is a safe bet, but try the Solo Bass and Vocal ones where appropriate). Click on the clip to select it, then choose Clips / Bounce to Clip(s). It may take a little while to render the audio on long clips, but the fidelity will be far superior to preview mode.

When people started snapping and quantising everything to the beat, there was a backlash, and understandably so. Excessive quantisation can drain some of the vibe. But there’s also something to be said for ‘rock solid’ playing — ask any rhythm section. The object is to correct when there’s a mistake, but if the beat is being rushed or lagged for a reason, leave the rhythm alone.

Also note that AudioSnap can create a ‘pool’ of markers and use them as a reference for aligning transients if, for example, you want to lock bass notes so that they hit at the same time as the kick. For more information, check out my column from November 2011 at http://sosm.ag/nov11-sonar. It’s a little bit dated, but the principles remain the same.