Welcome to the 100th Sonar column. I'd like to thank Paul White and Dave Lockwood at SOS for asking me to write this originally, Debbie Poyser for editing the column (and always providing a welcome reality check) for most of its existence, and Nell McLeod, my current editor. Of course, I'd also like to thank Cakewalk for continuing to come up with new things to write about but, above all, I'd like to thank you, the readers, for your support. And with rumours of a Sonar upgrade in the works, I'm sure we'll have plenty to discuss in the future!

As for this issue, we're going to look at snapshot automation techniques for effects: a different kind of approach to automation that can be very effective.

Automating effects can create mixes that go beyond simple fader, pan and send level changes. For example, rather than boosting level to make a guitar solo stand out, try boosting the EQ gain slightly around 3‑4 kHz, which adds an 'edge' to the sound — or perhaps increase distortion drive. I particularly like using snapshot automation with effects, possibly because of all those years of hitting footswitches to switch effects in and out. There's some extra drama about having an effect just 'appear'.

However, Sonar's 'native' snapshot automation may not always work how you want it to. For example, if you enable an effect's automation Write button, Sonar will create envelopes for all automatable effects parameters, which can be a lot of envelopes. Generally, the snapshots I need relate to one or two parameters, so here's how to simplify snapshot automation. As an example, we'll automate the Sonitus EQ's Gain parameter for band 3. (Note that this EQ is inserted in the effects bin, and is not the per‑channel EQ visible in Console view.) 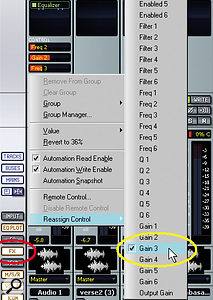 Right‑clicking on the FX button (circled in red) reveals the assignable slider controls. In this example, the fourth slider is being assigned to the Gain parameter for equaliser band 3.

When you're going through a file and setting snapshots, it's sometimes inconvenient that, upon stopping, the Now time rewinds to the current Now marker instead of simply staying where you stopped; you probably want the Now marker to remain in the vicinity of where you'll add the snapshot. When doing snapshot automation, you could therefore consider going to Options / Global and unticking 'On Stop, Rewind to Now Marker' (the third tick-box from the bottom in Sonar 8.5).

This technique involves the console view and lets you set up snapshots for four different parameters. To start, enable the console FX view button (in the toolbar to the console's left). This shows the effects bins. Then right‑click on this button and choose Show Assignable Controls. Four sliders appear below the effects bin.

One huge advantage of assignable sliders is that you can bring in parameters from anywhere in an effect, even if they're on different pages or 'hidden' (for example, Guitar Rig's 'expert' parameters, which are visible only if you 'open up' the amp). Of course, you can also use these sliders for traditional DAW automation, where you enable Automation Record and move the slider to write automation data.

Let's say you want some really radical changes in an effect. You can write‑enable multiple parameters, then follow the same basic procedures described above. However, there's another method that doesn't involve envelopes at all, but instead uses the clip effects bin.

For example, imagine you have an amp sim set up for a really cool sound and you want to not only change a parameter, but also swap to a completely different amp sound, maybe even with different effects. Here's how:

One disadvantage to this approach is that each plug‑in instance increases the CPU load; the effect has to be always enabled, so that there's no gap when playback hits the new effect. With CPU‑intensive effects, this can be a problem, but with relatively simple effects, such as delay, you probably won't notice the CPU hit.

An important advantage of the approach is that some parameters — often ones involving intense calculations, such as reverb time — don't handle automation changes elegantly and may glitch. Because you have a separate instance of the effect, the parameter change is already locked and loaded.

Although I like snapshots, smooth changes can also be very effective with effects. As an example, imagine you have a distorted rhythm guitar part and you want to increase the intensity from the end of a verse into a solo section. One option is to increase the level over time, but the sound might be more interesting — and more intense — if you increase the amount of distortion drive over time, rather than just playing with the level. Of course, you can do this by recording the moves from a hardware controller or drawing in an automation curve, but sometimes it's easier, and even more effective, to set a start point and end point with snapshot automation, then ask Sonar to create a smooth change between them. To do this: 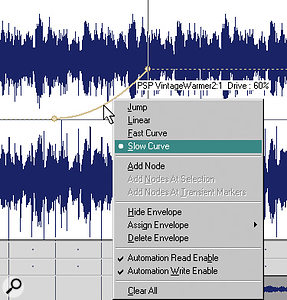 A slow curve is being created between two snapshots to increase the Drive on PSP's VintageWarmer.

I find that Slow Curve can give really dramatic effects when increasing distortion drive, but you can experiment — isn't that what it's all about?