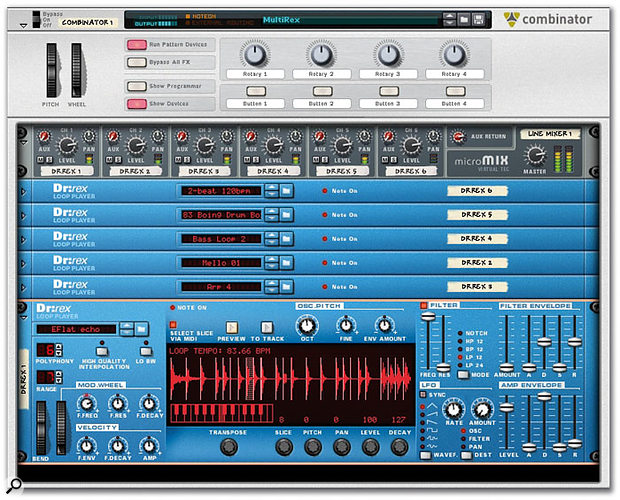 Six Dr:Rex devices in one Combinator — all loops and settings saved in a single patch.

The new Combinator device can solve Reason problems you didn't even realise you had. We elaborate, as well as offering news and tips.

I've recently been having a play with Obsession, one of eLab's themed loop collections based around a nicely-specified eight-track REX-loop player plug-in. It offers a file-saving system lacking in Reason 's own Dr:Rex, and the way a user's own REX loops can be imported got me thinking how nice it would be to have a similar dedicated multitimbral REX device inside Reason. The thought quickly developed to: "But I can make one!"

The answer is, quite simply, v3's Combinator. This excellent device has had a lot of coverage, not least in last issue's Reason technique feature, which offered a great crash course in sound design in Combinator format. But it's worth being reminded of the simple jobs the Combinator can do that make our lives much easier. One of these is adding patch saving and loading abilities to devices that lack it.

Thus one Dr:Rex could be saved in its own Combi and be reloaded at any time with its loop and parameter settings intact. Add another seven instances of Dr:Rex to the Combi setup and you have a good approximation of what eLab's loop player has to offer. However many Dr:Rex devices you put in the Combi, you'll find it essential to include a mixer, either a Remix or a Micromix, to sub-mix the massed audio to one stereo output; a mixer will also allow you to save effects as part of the patch.

The great thing about the patch is that any front-panel changes made to any Dr:Rex included therein are saved with the selected REX loops. A Combinator could also be used more simply to collect a couple of Dr:Rex devices that each have a verse or chorus loop loaded, or two halves of one bit of music (I sometimes have to split REX loops into two when the contain more slices than Dr:Rex can accommodate). 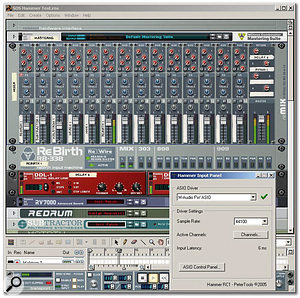 Peter Tools' Hammer may not be overdressed, but what an excellent little addition it makes to the Reason user's arsenal! Note the meter activity in the Rebirth Input Machine and Remix channel six: that's external audio!

One last thing: each Dr:Rex still needs a sequencer track from which to be triggered.

At the risk of repeating myself, I think it's worth adding a few comments to my report last month on Peter Tools' still-beta Hammer audio input add-on for Reason. To recap, this PC-only widget hijacks Reason 's Rebirth Input Machine to Rewire external audio into the Reason rack. Once there, audio can be mixed, effected, vocoded, and so on, alongside standard Reason sounds.

After playing with the beta for a little while, I'm still amazed that Hammer works. It was easy to set up, has been crash-free during my tests (amazing enough for some fully released software, let alone a beta), and provides a really useful tool to the creative Reason user. As I noted last month, this is essentially a live or real-time tool, since the host still lacks any way to record audio. But being able to patch my bass through Scream 4 did confirm to me that I'd really like one of these available as a plug-in inside another host! I/O delay aside, it sounded great, and I'm looking forward to the final release of the software.

Incidentally, Peter Tools acknowledge the latency issues, which occur due to the convoluted signal path from input hardware, through software and back out again. They didn't seem quite as bad as I'd expected, though singing through Hammer would be a challenge!

If you use Dr:Rex a lot, try this: swap around sequencer tracks assigned to Dr:Rex devices so that one loop's triggers play another loop. Don't worry if the loops have different lengths or feels. Then try triggering loops in several instances of Dr:Rex from one track's triggers. You might think that you'll need to copy the triggers to multiple tracks — easy enough to do. But it may be quicker to load the target Dr:Rex devices into a Combinator and route one trigger track to that device: all the Dr:Rex devices in the Combi will be triggered and play back.

However you do this, you could well find interesting textures, rhythms and tunes coming out of the existing material. Loading loops at random can be particularly fun!