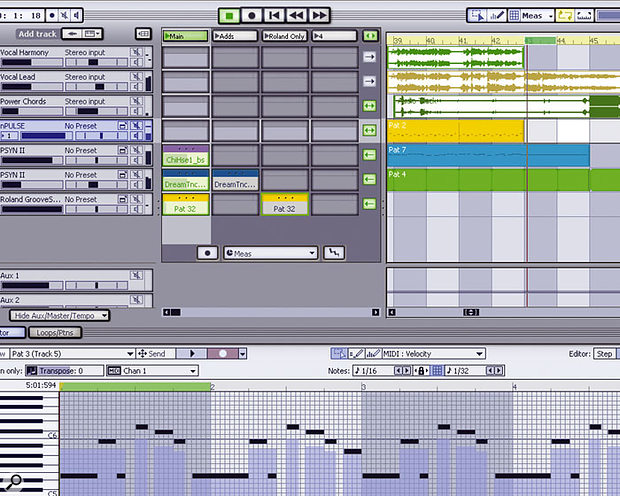 Note the groove matrix located between the tracks pane and the clips pane (the MIDI Pattern view is just visible toward the bottom). The groove matrix gives Project 5 more of a live performance feel and encourages improvisation.

Sonar LE appears, we find a utility that lets you zoom with a mouse wheel, and Project 5 slightly changes direction...

Although some Cakewalk programs have been based on previous versions of Sonar, and there are both Producer and Studio editions of Sonar 4, the recently-announced Sonar LE fills a remaining gap in Cakewalk's product line. Sonar LE is an OEM (Original Equipment Manufacturer) version of Sonar 4 Producer Edition, and is bundled with several of Edirol's hardware offerings, including the UA and UM series of audio and MIDI interfaces, SD sound modules and PCR keyboards.

Sonar LE is surprisingly capable. It offers 64 audio and 256 MIDI tracks, supports 24-bit recording up to 192kHz, implements Rewire 2 as a host and includes MIDI clock and MTC slave sync. LE has the familiar Sonar views: loop construction, dynamic console, piano roll, staff notation and drum-grid editor. Both VST/VSTi and DX/DXi plug-ins are supported, and Dreamstation and Cyclone DXi instruments are included, as are 14 real-time effects and six MIDI effects. Furthermore, according to Cakewalk, registered owners of Sonar LE will be able to upgrade to the full version at a special price. (More Sonar converts, mwa-ha-ha-ha...)

Go to www.ardamax.com/info_mwc.html and download setupwmc.exe. Once it's set up, specify the disk path to Sonar, so that the program knows Sonar is the target app. Then specify the control-key combinations for the wheel-up and wheel-down motion; for horizontal zooming, I chose Ctrl + Left Arrow and Ctrl + Right Arrow. You can also open up a second 'application' and choose what's to be controlled when you press down on the mouse wheel and move it. I chose vertical zoom (Ctrl + Up Arrow and Ctrl + Down Arrow).

Mouse Wheel Control installs an icon in the system tray, whereby you can redefine functions, enable or disable, get help, and so on. It seems to have no negative effects on Sonar or Windows, and given the time you'll save by being able to leave your hand on the mouse when you need to scroll, it's not hard to justify the $15 price tag.

In April's Sonar Notes, we covered the Winter NAMM news about Project 5 v2. However, the new version has just started shipping, and there have been changes in its 'positioning' between NAMM and now, so it's worth a few more column inches.

The first version of Project 5 was seen as Cakewalk's answer to Reason — basically, an all-in-one studio. I never really agreed with that assessment, as detailed in my SOS review (www.soundonsound. com/sos/jun03/articles/ cakewalkproject5.asp), and v2 makes that comparison even less valid — although there is now some philosophical commonality with Ableton Live 's 'stage meets studio' vibe. Yet Project 5 's implementation is quite different. Rather than using separate 'live' and 'studio' screens, Project 5 inserts a 'groove matrix' between the track view and the clips pane. This allows the switching between or combining of live and sequenced playing styles within a single environment.

The groove matrix is similar to Live 's session view, but operationally it can be used on its own or 'tied' to the clips pane, so that whatever you do in the groove matrix is recorded as audio data. You can even hide the clips pane entirely and just work with the matrix, or use the matrix as a kind of development system for tracks. It's a rather different interpretation of the venerable Akai MPC60 groovebox paradigm at the heart of so many groove-orientated programs.

Cakewalk's marketing angle is that Project 5 blurs the line between stage and studio, which is OK as a short tag-line, but begs further explanation. To address the 'studio' part of the assertion, Project 5 includes tools for greater spontaneity as you're recording — there's more emphasis on improvisation, composing on-the-fly, and trying to get inspiration recorded rapidly. From the live angle, Project 5 brings some studio tools to the party, such as playing back Acid ised files, recording on the fly and weaving in pre-recorded backing tracks.

Some Sonar users might see the new freeze features, audio recording and so on as simply variations on Sonar, but while Project 5 does indeed draw from Sonar 's technology base, the experience of using the two programs is different. Of course, you can always Rewire Project 5 into Sonar if you want to combine the two methods of working (unlike the original version, Project 5 v2 can also serve as a Rewire host).