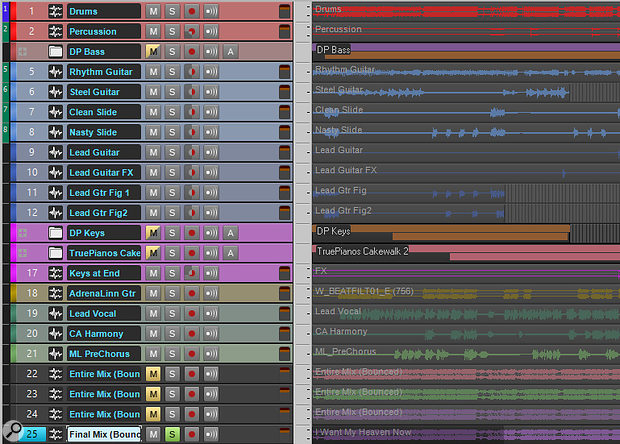 All the tracks in this song are named properly, all clips are bounced together, and instruments have been rendered to audio with their corresponding MIDI tracks muted. Note the bounced mixes at the bottom.

Tie up those loose ends and declare your projects finished!

One of the wonderful — and also horrible — aspects of today’s DAWs is that you can tweak forever and ever and ever. Sometimes, people have a hard time letting go of a project and finishing it. We’ve devoted a lot of columns to making music with Sonar, but let’s turn our attention to finishing projects.

First, although it’s important to finish projects, it’s also important not to have regrets. If there’s a bad note, a wrong mix move, or anything that’s going to bother you on subsequent listenings, deal with it. Second, you may want to return to a project in the future, so “never say never”. A record company might want a different mix, or a mastering engineer may suggest changes. Part of finishing a project is feeling secure about being able to open it up in the future if needed.

So with those two caveats out of the way, let’s assume your mix is done, and you’re pretty sure your song is complete. Here are some steps you might want to take on the way to your final sign-off.

First, give yourself some space: don’t listen to the final mix for a week. That way you’ll have some perspective when you return to the project to do your finishing touches.

Zoom out and listen to the arrangement. I believe that in general, the fewer parts an arrangement has, the more emphasis there is on the parts that remain. It’s amazing how much you can improve a song by selectively removing the excess — so now’s a good time to trade in the Smart Tool for the Mute Tool, and see what happens when you mute tracks or clips. Pay particular attention to parts that extend for the duration of a song, because there’s a greater likelihood they’ll wear out their welcome. For example, if there’s hand percussion in the song, take it out during the vocals, then bring it back in when there’s no-one singing. Take the bass out for a few measures. Trim that over-indulgent 16-measure intro to four measures to involve your listener sooner.

Remember, you don’t have to commit to cutting this material out: just mute it. Also remember that when holding Alt, the Smart Tool turns into a Split Tool, so you can split at strategic places and then type F10 once or twice until the Erase Tool becomes the Mute Tool.

After paring your arrangement down to the essentials, solo each track and listen to it in isolation. For this, Sonar’s Exclusive Solo button is ideal. I also recommend listening to each track on headphones to hear as much detail as possible.

The Exclusive Solo button (green) and Envelope/Offset Mode button (blue) in the Control Bar are very helpful in the final stages of finishing a project.

Although you may think that there’s no need to be concerned with little glitches that you can’t hear in the context of a mix, you actually do hear these as part of the composite sound, and when you remove them, it’s like taking dust off a painting. Here are some of the common issues you’ll find when listening under the audio microscope:

This isn’t essential (and may be a bit old-school), but I like a project’s final result to be audio. When calling up old projects, the main problems I experience come from plug-ins that won’t load, for one reason or another. Rendering to audio used to involve bouncing and creating a new track, or leaving an instrument in a frozen state, but Sonar’s synth recording feature is ideal for this application. Not only can you record the synth audio right into the associated synth’s audio track, but because it’s real time, you can combine rendering with the process of listening to each track by itself. After verifying that all is well, mute the instrument’s MIDI track so you don’t hear the synth twice (ie. the rendered audio along with the instrument driven by the MIDI data).

In the days of big studios, a good assistant would take notes so a project could be revisited in the future. I save two versions of every project: the ‘messy’ one with all the different ‘Save As...’ versions, all the audio and so on (this usually fits on a single DVD-ROM), but I also save a slimmed-down, annotated, final version. This has all the tracks named properly (no ‘Record 1’ and so on), removes muted sections, deletes all alternate takes, bounces all clips within a track, includes track icons, incorporates lyrics and other info in the Project Info file, has all related tracks coloured similarly, and so on.

After the mix is done, I bounce the mix down within the project as one final track. I may even have a few alternate mixes, like one without vocals in case someone wants to use the song for a vocal demo.

This is also when I’ll do any final tempo changes, using the varispeed-type options available in Sonar’s Loop Construction window (described in the June 2014 issue). I apply this to a copy of the mix, and also, write the percentage change in the Project Info file. 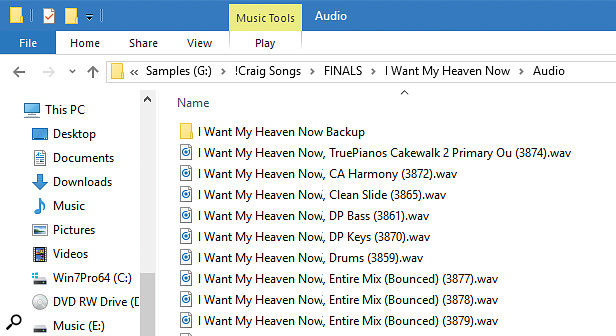 Consolidating audio places all audio referenced by a project’s clips into a separate sub-folder within the project folder.

I wrote a two-parter about future-proofing backups in December 2010 and January 2011 (if you care to take a look). The premise is that by rendering everything as WAV files, the parts can always be imported into any program and operating system capable of recognising that format. Generally I tick ‘Create One File Per Clip’ when saving, to save space, but that also makes any audio that existed outside of the clip inaccessible. A standard save stores all audio used in the Sonar project whether it is actually referenced by the project or not, and as a result, it can take up lots of space; but note that there’s another option that splits the difference between these two choices.

Assuming you save your projects using a per-project folder, choose Utilities / Consolidate Project Audio. This function’s original purpose was to recognise all files that are actually used in a project, including files in other media (such as loops being read from DVD-ROMs). Consolidation will not save any file that is not referenced by a clip, but unlike the ‘Create One File Per Clip’ option, the entire file will be saved into a sub-folder within the project folder’s Audio folder, not just the portion referenced by the clip. The sub-folder is named automatically as ‘[project name] backup’. I also recommend saving the CWP project file into the sub-folder, but don’t tick ‘Copy All Audio with Project’. Now you not only have what you need to open a project in the future, but some ancillary bits you may end up needing as well.

Offset Mode is one of Sonar’s greatest gifts to finishing a project. This function offsets automation higher or lower, so that if (for example) all the level automation moves in a track are right but the overall level is too loud or soft, you needn’t touch the automation — just click the Offset Mode button, and now the faders control offset. However, I recommend turning off Offset Mode as soon as you’ve made any adjustments, so the faders show their original automation positions. Also, if the offset amounts you need to use are significant, consider moving the automation envelope up or down to make any necessary changes so that offset is needed only for broad adjustments.

A portable music player, which these days is usually a smartphone, is an extremely helpful ‘finishing tool’. You can use Bluetooth to hear the music over your car’s audio system, listen through earbuds as well as quality headphones, and of course, it’s always a good idea to have more than one set of speakers you can switch between in your studio as a reality check. If you have the resources, auditioning over super-high-quality speakers at a studio or mastering suite will help give another perspective.