Recording a solo performer requires a different approach from recording a band, and different ways of using Sonar.

Over the past few years, I've had the good fortune to work with some world-class solo classical performers, such as Argentinian guitarist Nestor Ausqui, harpsichordist Kathleen McIntosh and, most recently, guitarist Margarita Escarpa. In the process I've learned a lot about optimising Sonar for recording solo performers, and the techniques apply to pretty much any solo performer, not just in the classical field.

Because this is a pretty lengthy topic, I'll cover it in two parts. This issue's article covers the miking and recording process leading up to the next article, which will cover Sonar-specific ways to make comparing takes easier. Using these methods, you can easily locate the best parts of your recordings and combine them into the ultimate performance, like comping vocals or guitar solos, but in a multitrack context.

With solo performers, the usual goals of minimising leakage, promoting eye contact among band members, and so on, don't apply. Instead, the goal is usually to create a warm, intimate, realistic vibe.

With classical guitar, I don't stereo mic the guitar, for two reasons. The first is phase: with one main mic, there are, by definition, no phase issues, and the guitar sounds clear and strong. The second is the reality factor. If you listen to a classical guitarist in an acoustic space, the guitar isn't responsible for generating a stereo image: the room is. Because of this, I record with a main guitar mic; a close 'ambience' mic, high up and pointing down at the guitar, if I need to mix in some of the guitar artifacts to give a more present sound; and two room mics to provide stereo imaging.

It's worth putting some time into selecting and placing room mics. One of the most important requirements is low noise, as the mics will be picking up relatively weak signals. Frequency response is not all that important, because the effect the room has on the sound will be more significant anyway. Besides, if there are significant response problems you can always add some EQ to compensate. Bringing these room mics up in the background, before adding any reverb or other artificial ambience, provides the bulk of the stereo image.

Compared to the guitar recordings, with Kathleen McIntosh's harpsichord I went for a close-miked, stereo sound, with one mic pointing at the bass strings and another around the high strings, pointing across the soundboard. The effect we wanted was that you weren't in the audience of some large hall, but sitting at the harpsichord and hearing what Kathleen hears. Nonetheless, the room ambience mics were equally important, from the point of view of providing a satisfying ambience.

Because the room mics are such an important part of the sound, they need to be EQ'ed properly. With an instrument such as guitar, the room mics tend to accumulate mid-range frequencies, causing them to compete with the guitar and muddy the sound. I've found a couple of techniques that give the room sound more of a distinct ambience, rather than it sounding as though it's part of the instrument. The room also acquires a sense of depth, even with stereo.

You can tweak EQ to reduce the muddy part of the mid-range, but it saves time with this kind of task to use Sonar's Analyst plug-in, which shows a track's spectral distribution (see screenshot on left). 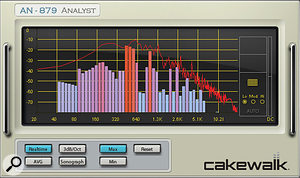 Sonar's Analyst plug-in shows the response of the room mic, without any EQ; there's a major 'mud' peak in the 200-500Hz range. Also note the rapid fall-off in the low end.

The curve with the unequalised room mic clearly boosts the lower mids, which is a frequency range that competes directly with what the guitar is playing. This indicates the need for some kind of notch, and the Sonitus EQ (below) does the job. 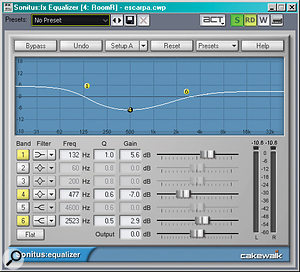 This curve works very well with the room mic. It reduces the lower-mid range, brings up the lows and accents the highs. It's not necessary to get fancy with the EQ, as general tone-shaping and low-Q settings are best anyway. As the EQ screenshot shows, only three bands are necessary to do what's needed.

If you look at the equalised signal through the Analyst now (above), there's quite a difference. The lower curve clearly has less of a lower-mid peak, a smoother and somewhat boosted bass, and a slight high-end lift. This de-emphasises the frequencies where the guitar is most prominent, smoothing the overall response. 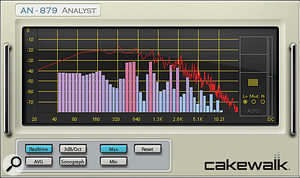 This is the same room-mic signal after processing through three bands of EQ.

Now let's look at the complete channel setup (right). The two channels on the right are the room mics, but there's a twist: one mic has its phase reversed compared to the other. This produces a very interesting effect, as it widens the stereo image, but because the mics are far apart, there's no detectable cancellation when you switch the output from stereo to mono. Widening the image opens up the centre a bit as well, which creates more space for the main guitar sound and gives it more clarity.

The channel setup I used for mixing Margarita Escarpa's tracks.

Hard disk space is cheap, so after setting up the mics and letting the performer warm up and tune up, I click on record and let the recording continue for as many takes as are necessary to capture a perfect performance. This doesn't mean that one take has to be perfect, but there have to be enough takes that every section is perfect in at least one of them.

In my experience, it's even more important for the engineer to be transparent with a solo artist than with a band, because it's easier to break one person's concentration than a band's. So once I click on record, we stay in record until we stop working on that particular song. Don't start/stop, rename files, or attempt to do any file management; just let Sonar record, but make sure the artist understands that this is the way you work, so they can relax and just play away.

You might wonder if these long files will cause complications later on, but Sonar has some features that actually make the process of working with long, continuous files faster than working in any other way, even when recording at 96kHz (which is what I use for classical projects), and burning through multi-gigabyte files — as we'll see next issue.

Now that we have our long, continuous, annotated file, it's time to start the editing process. With something like five takes of a classical piece that has multiple movements and lasts 20 minutes, you can easily end up with a file that's well over an hour, especially if there are lots of pauses for tasks such as tuning.

You can make the file easier to work with by deleting the dead spaces that happen between takes, while tuning, and so on. Here's how.

1. Position the Now time at the beginning of a dead space, hit Ctrl-A to select all tracks, then type 'S' to split the file across all tracks.

2. Position the Now time at the end of the dead space; again, hit Ctrl-A and type 'S'.

3. With all clips in the dead space selected, right-click on any one of them and go Edit / Cut from the contextual menu.

4. In the Cut dialogue box, tick 'Events in Tracks' and also 'Delete Hole'.

5. Click on OK and the dead space will be removed, with the file to the right moving to the left to close up the hole created by deletion.

Be careful to leave some space so that there's a visual cue for where one take ends, and another begins — and make sure you don't cut out any comments the artist made between takes (see 'Oral History' box). After cutting the unnecessary parts, use Ctrl-A to select all files, then go Edit / Bounce to Clips. The takes will be joined into one long take on each track. Next issue, we'll find out why that's a good thing, as we assemble the perfect performance.

Encourage the artist to make verbal comments between takes, such as "I liked the last half of that take, but the first half had too many mistakes.” This is invaluable when you come back weeks later and are trying to sort out which parts to use from which take. Most artists aren't used to working in this way, so ask them to be as detailed and chatty as possible.

However, bear in mind that what the artist thinks was great may not actually be the best take; they may have just executed a particularly difficult passage well, while the rest of the take is lacklustre, so you'll still have to listen to all the takes and make some of your own judgments. Nonetheless, having comments from the artist can be extremely helpful.