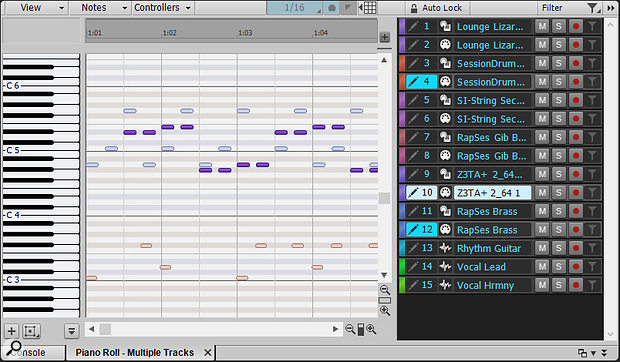 Screen 1: The revamped Track Pane makes it more of a control centre for operations that extend beyond MIDI.

Although people once thought MIDI would fade into the background as digital audio recording became ever more cost-effective, virtual instruments have brought MIDI back with a vengeance. Part of that is because of the increased realism made possible by extensive use of controller data, and while Sonar had fallen behind in terms of handling controllers, two recent updates (with more to come) are all about making MIDI easier to use, particularly with regard to controller editing.

The Cakewalk Knowledge Base (www.cakewalk.com/Support/Knowledge-Base) has info on the updates, including which features are exclusive to specific versions, so we’ll concentrate on how these changes affect workflow. The main Track Pane flexibility comes from being able to see multiple tracks, highlight one of those tracks, but still allow editing on the others. Or, you can ‘lock’ tracks so that only the selected track and no other can be edited. The process of selecting, de-selecting, and placing the focus on a track may seem confusing at first, but once you learn the rules, it really speeds up workflow. Here are some typical applications for the Piano Roll View (PRV) Track Pane (which can be expanded or collapsed via the arrows in the PRV’s upper-right corner).

Select a track for viewing by clicking on its track number; the number and track name backgrounds turn light blue, indicating this is the track with the focus. (You can also click on a MIDI track number or MIDI track name in the main Track View to select tracks in the PRV Track Pane.) All other tracks will now be hidden. Ctrl-click on additional tracks to make them visible. The last track on which you clicked will have the focus, as shown by the track number and track name having a light blue background; the numbers for the other selected tracks will be blue. Any visible track, ghosted or not, can be edited.

Auto Lock (Professional and Platinum versions only) adds to this functionality by ensuring that tracks without the focus cannot be edited. For example, to edit one track while keeping all other tracks locked:

2. Smart Swipe across all tracks in the PRV Track Pane; all tracks will be locked, so no tracks are editable. The Lock icon background will be blue.

The PRV’s Track Pane incorporates other useful touches so you can accomplish more from within the pane, thus minimising the need to change to a different view. For example, you can choose to see audio track headers as well as MIDI track headers in the PRV Track Pane (of course, you won’t see audio waveforms in the PRV), and, like MIDI tracks, the audio tracks have Solo, Mute and Record buttons, and support Smart Swipe. Furthermore, the Track Pane header height has been shortened so you can see twice as many tracks in the space as previously. These changes mean you won’t have to alternate between the PRV and Track View to, say, mute an audio track you don’t want to hear while editing.

To open an instrument’s GUI for editing, click on the MIDI button in a MIDI track header or the instrument button in an instrument audio track. You can also choose colours from within the PRV’s Track Pane using the Color Picker. This is especially important because if the focus is on a track with a colour strip, the notes appear in that colour — and colour-coding makes it easier to parse different tracks. Finally, pulling the Track Pane to the left displays the outputs for tracks in the Track Pane, and a right-click context menu pulls up the scale manager options.

However, do note that selecting a track in the Track Pane does not select MIDI data for editing in the Track View — it selects which track’s notes appear in the PRV for editing.

Like Auto Lock, the Filter feature is available only in the Professional and Platinum versions. It allows you to designate which tracks will be visible and available for selection or focus; you can then toggle between the filtered and unfiltered track combination by clicking the Filter button. For example, one filter might be only the bass and drum parts so you can verify that the notes line up properly.

Using the View menu, it’s possible to set the default PRV opening behaviour so that it automatically applies a filter to whatever tracks are selected. This is extremely convenient if you work on groups of MIDI tracks; as long as you’ve selected what you want, opening the PRV filters on only those tracks.

The Platinum version takes this one step further because you can save Filter Sets. With something like orchestral projects, there can be a preset for string tracks, another for brass tracks, one for percussion, and so on. As to why there’s a PRV track select mechanism as well as a filter, the Track Selection (Number/Name) determines what you see in the Piano Roll Pane. The Track Filter determines what you see in the Track List Pane. If you’re frequently scrolling up and down the tracks in the Track List Pane, using a filter can shorten the list.

Controlling In The Deep

With the previous PRV, each added controller lane narrowed the height of all lanes, which made editing difficult if you had lots of controllers. Although using the Track View’s in-line PRV addresses this by displaying automation at the full height of a track or automation lane (recently updated so you can set higher automation lane heights), some people prefer to work entirely in the PRV. 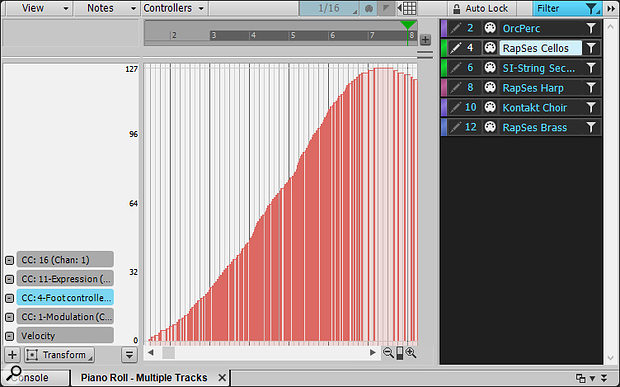 Screen 2: Buttons toward the left of the Controller Pane select an individual controller for editing.

Sonar now defaults to Single Lane mode, which shows one controller lane so you can take advantage of the full pane height (screen 2). The original option for seeing multiple lanes is still available from the View menu. In Single Lane mode, there are buttons in the left part of the Controller Pane; clicking on the button selects the controller to be displayed.

However, there are two limitations. With a huge number of controllers (the amount depends on the pane’s height), you’ll run out of space to put buttons for selecting them — at present, it’s not possible to scroll through a list of controllers. Also, you can’t choose how many controllers you see, other than one or all. However, there’s a simple workaround using the Track View’s in-line PRV if you want to see only a certain number of controllers but have them as tall as your track or Automation Lane allows:

1. Convert the PRV controllers to Track View envelopes by selecting the track and time range containing the envelope(s) to be converted.

3. In the dialogue box that appears, specify the number and channel of the controller you want to convert.

You can view all envelopes in automation lanes, but if you hide an automation lane you’ll see its envelope ‘ghosted’ in the parent track if you’ve chosen View / Display / Display Ghosted Data (screen 3). Hiding more envelopes displays more of them as ghosted (of course, you can always turn them back into Lanes again by showing a lane and assigning it to the envelope type.) To edit an envelope, set the track’s Edit Filter to Clips. While holding the Shift key, hover the mouse over the envelope you want to edit, as confirmed by a tooltip with the envelope name and number. Click, and the envelope is available for editing.

Although there are certain advantages to editing controllers as envelopes in the Track View (you can change the curve shape between nodes, use the Smart Tool to raise or lower an entire envelope, or use the Draw tool’s periodic waveform options), note that once a controller is converted into an envelope, it can’t be converted back into a PRV controller again.