Studio One: Tracks And Channels Skip to main content

Studio One: Tracks And Channels 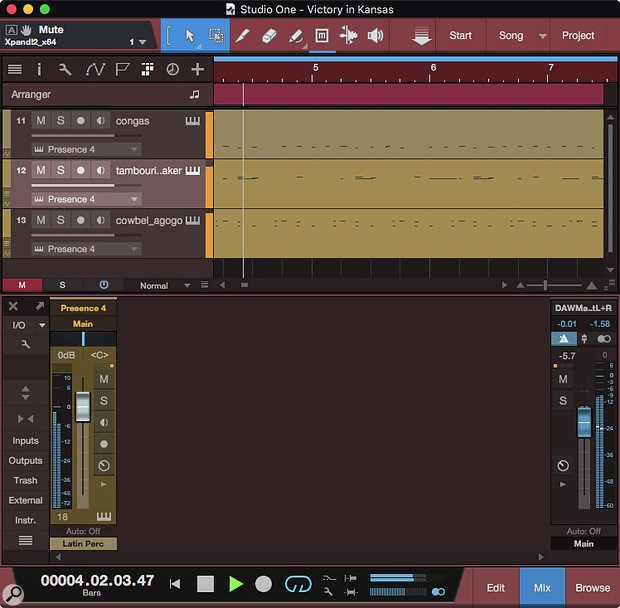 Screen 1: All three of these tracks are playing the same instance of the Presence virtual instrument, yet there is only one stereo mixer channel for all of it. With all the percussion sounds feeding a stereo output, balancing them can be done only by modifying note velocities.

What’s the difference between a track and a channel? In Studio One, this is not a trick question...

Many DAWs, including Pro Tools, maintain a one-to-one correspondence between tracks in their arrange or edit views, and channels in their mixer views. Studio One does things differently, and its system has its own pros and cons.

Studio One’s mixer, which is referred to as the ‘console’ in some contexts, is at heart the user interface for the actual audio engine, while tracks in the arrange view are basically glorified edit decision lists (EDLs): instructions as to which bits of audio should be played at which time. Other control data such as fades, event levels and automation are also stored as part of tracks, but those, too, are just instructions. Behind the scenes, the audio channel is where it all actually plays out — both figuratively and literally.

There is a one-to-one correspondence between audio tracks and mixer channels; every audio track has one mixer channel. As we shall shortly see, however, virtual instruments are a different story, and can be responsible for a good deal of variation in track and channel quantities.

Tracks and channels both have solo and mute buttons, but their actions are linked only for audio tracks. Muting or soloing an audio track also mutes or solos its channel. But virtual instruments use both an instrument track for performance data (MIDI) and a mixer channel for audio. These are different entities with different functions. As a result, the solo button on an instrument track also solos the instrument mixer channel because both performance data and audio are needed to solo an instrument, but the mute buttons are not linked. To understand why, consider the following example.

Let’s say I’m working on a piece using Latin percussion and have a virtual instrument playing a percussion preset with a different sound on each note. The percussion is active and important, so I split notes playing the congas, tambourine and cowbell to their own tracks. As a result, I have three tracks all playing the same instrument on the same MIDI channel (Screen 1), using different notes to get the desired percussion sounds. Now I can mute the conga track and hear how just the cowbell and tambourine are working together. If I’m composing, I can experiment with instrument combinations. 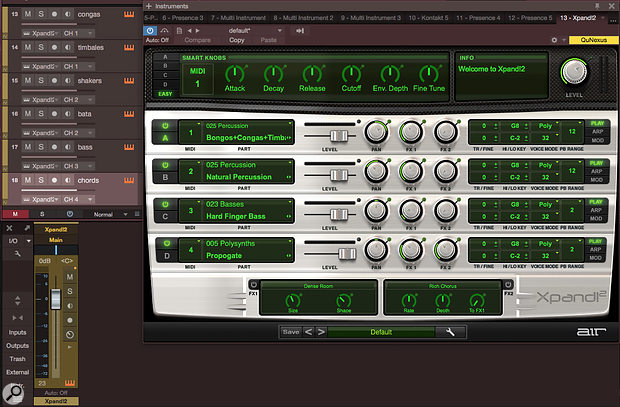 Screen 2: There are six tracks playing four presets over four MIDI channels in this instance of AIR Instruments Xpand2, a multitimbral instrument with a single, stereo audio output. Many tracks, several MIDI channels, one audio channel.

The track/channel disparity becomes more acute with a multitimbral instrument that still only has a stereo output. For instance, I get a lot of use from the AIR Instruments Xpand2 instrument, which can host up to four presets, each on its own instrument (MIDI) channel, with the audio outputs of all four presets summing to a single stereo output (Screen 2). With four presets I can load two different percussion or drum instruments, each on its own channel, plus two more sounds on the other two channels. I end up with quite a few more tracks than channels. 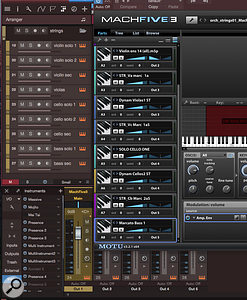 Screen 3: This MOTU MachFive3 multi (centre) has 10 parts, each of which gets its own track. Eight MIDI channels are used to control it, and it results in five audio channels in the mixer. Multitimbral, multi-output VIs can get a bit complicated at times.Multitimbral, multi-output instruments take the track/channel issue to another level. With multiple sounds, MIDI channels, and outputs, anything can happen. Advanced samplers such as NI Kontakt and MOTU MachFive3 are good examples: I have a MachFive multi with three channels for violins, two for violas, three for ’cellos and two for basses (Screen 3). I used this preset on two different projects. One was a hard, fast, cheap job, for which submixing to a stereo strings mix in MachFive3 was convenient. The other project required more detail, so I used one-to-one routing to allow for different controller data for the various instruments, plus greater flexibility in the mix. 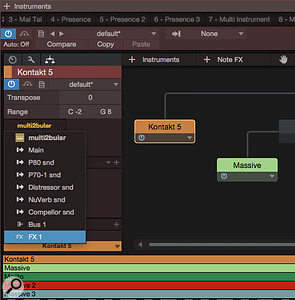 Screen 4: By default, all the virtual instruments in a Studio One multi-instrument sum to one stereo mixer channel, but each one can be selected and re-routed individually, as shown here.Elsewhere in the mixer, bus channels, FX channels and outputs do not carry audio from audio or instrument tracks, and so have no corresponding tracks. Or do they?

If I want to automate a bus channel such as a submix, even just its mute, I need to create an automation track to do it. And that leads to organisational issues. If I have three different FX channels for lead guitar, do I want a separate track for each, or am I going to have one ‘guitar fx auto’ track for all of them? I generally lean towards consolidating onto fewer automation tracks, but only including directly related functions, like the guitar effects example.

The down side of giving yourself access to finer granularity (especially as regards individual instrument outputs) is that it necessarily injects a greater quantity of both tracks and channels into your session, which increases complexity and slows things down. The best tactic to combat this drag on creative flow is to apply organisation. Studio One’s folder tracks can be very powerful in managing tracks and channels. All those strings tracks can be combined in one folder track, and even have their audio routed to a single bus channel, VCA channel or output.

Colour-coding is available for tracks in the arrange view, but I find colour-coding most meaningful in the mixer. This is particularly true in light of Studio One’s handling of channel placement in the mixer, which can vary with grouping and preferences. Good colour-coding is helpful for clarifying the role of a channel, even if the order in the mixer does not make that clear. 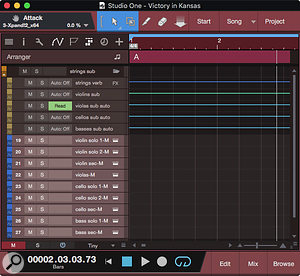 Screen 5: My MachFive3 strings multi fully organised in the arrange view. Tracks are colour-coded, including different colours for instrument and automation tracks. Note the automation tracks at the top; these tracks cause the submixes and reverb channels in the mixer to collapse along with the instrument tracks, assuming show/hide is linked between the mixer and arrange views.Studio One has no ‘channel folders’, but track folders can accomplish good management in the mixer, as well, when they are linked to mixer channels. Click the wrench icon in the upper right of the mixer to open the mixer options dialogue, and be sure the Link expand/collapse of folder tracks with show/hide box is ticked. Now, collapsing a folder in the arrange view also hides the associated mixer channels, but it only hides channels for tracks in the folder. If I have an FX bus return in the mixer sitting between two tracks that are in the same folder, collapsing the folder will hide the two tracks and leave the FX bus return, because it has no track in the folder. If this bothers you, create an automation track and assign it to control some parameter of the effect on the FX bus or its plug-ins. Now the FX bus has a track that can be put in the desired folder, after which it will hide when the folder is collapsed. I find this kind of utility indispensable.

The decoupling of tracks and channels in Studio One can demand a bit of thought to deal with, but it is logical, offers valuable advantages, and is quickly assimilated. Virtual instruments and audio effects can swell the numbers of tracks and mixer channels, sometimes unequally, but this extra overhead can be managed with good organisation, especially using folder tracks. It can be difficult to keep up your organisational systems when you’re on the firing line of production, but a well-constructed session can be a great asset in promoting creative flow by taming technical detail.

Distant City Studios - A Drum Room With A Difference
1 month 9 hours ago.