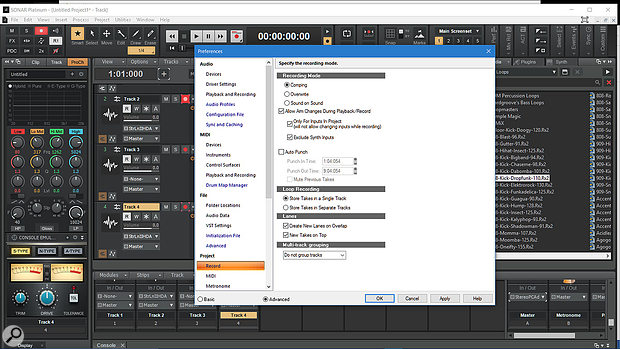 Preferences offers ways to tailor how punching and auto-punching works.

Comping may get all the attention, but Sonar’s punch options are powerful and fast.

One of the best features of today’s DAWs is comping, and Sonar’s implementation is very clever. However, before comping became common, punch-based recording was the way to turn OK takes into great takes. With analogue tape, the engineer had to punch in and out at the exact right moment to avoid recording over something he or she wanted to keep. Fortunately, digital recording allows automated punching at specified punch-in and punch-out points.

I had sort of forgotten about punching until working with a friend who uses Pro Tools, and relies on punching (interestingly, he’s since switched to Sonar). In the process, I realised that punching is still valid — although comping is wonderful, it can be cumbersome as you review multiple takes spread over multiple Take Lanes to decide which sections you like best, and then finally combine them. Furthermore, when I’m comping, often a particular take is “the one”, so comping ends up being more about selecting a take than isolating fragments from multiple takes and assembling them. In that context, punching can be faster and more efficient.

A common problem when punching is forgetting to disable punch record after doing the punch — so next time you go into record mode, nothing gets recorded if you’re outside the specified punch region. Theme Editor to the rescue: I made the punch record button a highly saturated shade of red so it would stand out and remind me that punch is enabled.

There are two ways to punch in Sonar: Auto-Punch, where recording occurs in a pre-defined region, or manual punching, which works like analogue tape.

The Auto-Punch process starts with specifying the region to be punched, typically by selecting a range in the timeline, then selecting a track. Or you can select the track first, then the timeline range. Another option is to select a clip, which automatically creates a range and selects a track. Either way, you next click on the Set Punch Points to Selection button, which simultaneously enables the Auto-Punch Toggle. Note that the track itself must be record-enabled for punching to occur.

Manual punching offers two main options. You can punch in and out on record-enabled tracks with the Transport’s record button. If the metronome is enabled for playback while recording but not playback, it will sound only when you’re actually recording — a useful audible confirmation.

In Preferences, you can specify Allow Arm Changes During Playback/Record. The default is to let you record-enable/disable a track only when the Transport is stopped, but ticking this preference allows punching in or out with the record-enable button, assuming you had initiated recording by clicking on the transport’s record button. Note that when punching in and out using the record-enable button, if enabled for recording the metronome will always play back — even when not recording — because the Transport recording button will still be enabled. Sometimes this can be very handy.

Overwrite mode: It may appear the waveform is not being overwritten as you record, but it is. When you open up the Take Lanes after punching, you’ll see the overwritten areas were removed from the original take, and a new Take Lane contains the punched material. You won’t hear the original take while recording because it has been overwritten.

There are a few differences with Auto-Punch enabled. Overwrite mode deletes the parts of the tracks that will be overwritten as soon as Sonar enters record mode, regardless of whether the ‘now’ time is within the Auto-Punch region or not. In both Comping and Sound on Sound modes, the default is to hear the previous take when you punch. However, you can choose Mute Previous Takes in Preferences if you don’t want to hear the previous take(s) when punching. Sonar shows the muted region as an outlined waveform to help remind you that muting is active. (Note that for both manual or auto-punching, multiple Take Lanes will follow the above rules when punching.)

If Mute Previous Takes is enabled in Preferences, as soon as you hit record (even if it’s outside of the punch region), Sonar indicates the section that’s muted with an outlined waveform.

This is my version of ‘speed comping’, but adapted to punching. Most of my punching is for particular phrases within vocals, and punching gets the job done faster than comping because no post-recording organisation is needed.

1. Enable Aim Assist (keyboard shortcut X). This makes it easy to drag across the timeline to define a region, and see precisely where the region begins and ends on tracks that might be physically far away from the timeline. You’ll probably want to turn off snap. If you want to get rid of the region (ie. you’re punching because your original take stinks), you don’t have to switch to Overwrite mode — after defining the region for the selected track, simply hit the delete key. But if you think there’s a chance you might want to keep it, you can click on the clip’s handle within the region, and drag. The defined region will ‘detach’ from the clip and land where you drag it.

2. Choose the desired punch mode — for example if you’re trying to follow a particular phrasing and want to hear the original vocal as a reference, choose Sound on Sound. Choose Overwrite if you don’t want the original section over which you’re punching, so you don’t have to clean it up afterward, or Comping if you’re not ready to commit and may want to keep the section being punched over. Note that if you choose either Comping or Overwrite, when you open up the Take Lanes you’ll be able to access the comping crossfade tools if you need to trim the beginning and/or end of the punched region with respect to the original track.

3. If you’ve used Comping mode, when you open up the Take Lanes the previous part will be muted and the punched material will be audible. If you’re trying to decide which one to keep, rather than deal with Take Lane solo and mute, you can select a clip and type K to toggle muted/unmuted. Once you’ve decided, click on the clip you don’t want, then remove it with the delete key.

Even if you choose overwrite mode, although there’s a ‘hole’ the audio still exists — so you can use the Crossfade tool to tweak the split between the punched part and the original track.

A variation on ‘speed punching’ avoids Take Lanes altogether. Create a new track intended for holding punched parts (of course, with a new track, the punch points can be well before and after the actual region you need to punch). After creating the punch region by dragging in the timeline, select the original track (ie. the one whose section will be replaced with a punch). If you want to get rid of the section over which you’re punching, hit delete or right-click within that section, and choose Split / Split at Selection to separate this section into a different clip. This makes it easy to listen to the part you’re replacing, then you can type K to mute it, or delete to remove it. Next, select the new track and do your punch.

Punching doesn’t completely trump the usefulness of comping, but the reverse is true as well — and it never hurts to choose the right tool for the job.