Managing large sessions in any DAW can be tricky. Fortunately, Studio One has the tools to help.

The Beatles, in their heyday, worked with no more than four tape tracks and 10 mixer channels. Look at just about any Inside Track column and you’ll find a Pro Tools session screenshot clearly demonstrating just how long gone those days are. (I wonder when we will see a Studio One screenshot in that column. I’m just sayin’...) Today, there can be hundreds of tracks, with a channel for each in the mixer, plus effects returns, virtual instrument returns, and many happy returns. Life in the mixer has gotten a lot bigger.

It gets hard to keep everything straight, making track and mixer layouts critical, and tools like folder tracks and mixer layout snapshots have become essential. The mixer generally gets much more densely populated than the track list in the Arrange window, so this month, I’ll look at some tools Studio One provides to help you arrange the mixer usefully.

Not The Same Way

Some DAWs, including Pro Tools and Digital Performer, have a one-to-one relationship between tracks and mixer channels, and there are merits to this. Studio One’s paradigm is not quite that strict, and there are merits to that, too. In Studio One, audio tracks are the only ones that appear one-to-one as channels in the mixer. Instrument tracks contain MIDI data (technically, it’s not MIDI, but that’s the easiest way to understand them), but the corresponding mixer channels actually are for the audio returns of the virtual instruments being played by the instrument tracks. Four or five instrument tracks might all be coming through one stereo VI return channel in the mixer.

Aside from audio channels and VI returns, the mixer can also contain VCAs, busses and FX channels, which can be handled differently in layout from audio and VI channels. The Arrange window, on the other hand, can have automation and instrument tracks that are not represented in the mixer. This helps keep the number of channels in the mixer down. 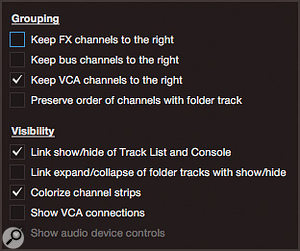 Let’s take the last case first. By default, visibility in the mixer and Arrange window are independent. A track can be hidden in the latter while its corresponding channel is visible in the former. However, it can be convenient to link visibility across the two, so that hiding the drum tracks also hides drum channels. This, along with a number of other features I will soon describe, is easily accomplished in the Mixer Options dialogue. Click the wrench icon at the far left of the mixer to open the dialogue, and tick the ‘Link show/hide of Track List and Console’ option. Now, showing or hiding tracks does the same with the corresponding channels in the mixer. This is two-way, so hiding channels in the mixer also changes the track visibilities.

The Arrange window allows tracks to be gathered into a folder track. The folder track makes it easy to group all of the member tracks it contains, or to assign them all to a bus channel for submixing. It also makes it easy to collapse all of the member tracks into the folder track to reduce clutter. There is no directly equivalent grouping method in the mixer, but there is a way to piggyback on the folder track to gain channel hiding. Open the Mixer Options dialogue, tick the ‘Link show/hide of Track List and Console’ option, then tick ‘Link expand/collapse of folder tracks with show/hide’. Note that this option is greyed out until ‘Link show/hide...’ is ticked.

With those options enabled, collapsing member tracks into a folder track also causes the corresponding mixer channels to be hidden. This is useful whenever you have groups of tracks, such as drum tracks or multiple microphones on a guitar amp.

There are other interesting relationships between folder tracks and mixer channels. For instance, moving a channel in the mixer also moves the corresponding track in the Arrange window. So what happens if you move a channel that corresponds to a track that is in a folder track? The answer is that moving a channel away from fellow folder member tracks channels results in the corresponding track getting moved out of the folder. If this is undesirable, you can, of course, drag the track back into the folder in the Arrange window, but you can also drag the appropriate channel in the mixer to a position between two other member track channels. You must move the channel between two other member channels; moving it next to the last member channel won’t do it.

You can avoid all of this unpleasantness and keep member track channels together by clicking the group button on the folder track, but this will mean that moving any member channel in the mixer causes all of the grouped tracks to move with it — something which protects tracks from getting inadvertently moved out of a folder track, but might be a bit unwieldy in the mixer. Everything is a trade-off!

Screen 2: In the left image, the ‘Preserve order of channels with folder track’ box is ticked, forcing the submaster to a position locked at the left of the member channels. In the righthand image, the box is unticked and the submaster has been dragged to the right.

Folder tracks include a field for assigning all of the contained tracks to a bus channel for submixing. Once again, Studio One offers options for how the submaster channel and the member track channels behave in the mixer relative to each other. When the ‘Preserve order of channels with folder track’ box in the Mixer Options dialogue box is ticked, a submaster will always be located to the left of the member channels feeding it. Drag any of the member channels or the submaster in the mixer and they all go along for the ride, even if the folder track’s group button is not active. Untick the box, and the submaster can be moved independently of the channels feeding it, which is what I do for the master drum submix.

Since bus channels do not correspond to tracks, bus channels feeding other bus channels — such as, for instance, snare and tom submixes feeding an overall drum submix — are unaffected by any of this. The name of this box is misleading, though, as the order of channels is not preserved. Even with this box ticked, it is possible, say, to swap the order of the top and bottom snare mic channels, assuming both are in the snare folder track. Of course, the tracks will also change order when you do this. 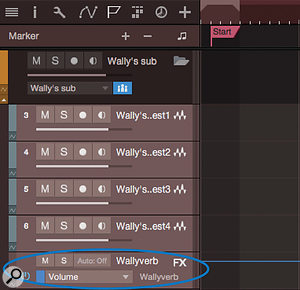 Note that the ‘Preserve order of channels with folder track’ option overrides the ‘Keep bus channels to the right’ box, so when both boxes are ticked, a submaster assigned on a folder track will stay with its member channels in the mixer. In fact, grouping, however it is invoked, overrides the ‘Keep right...’ boxes, which leads to a neat trick. You can keep an FX or VCA channel together with other channels, such as a snare reverb return with snare top and bottom mic channels, like this: 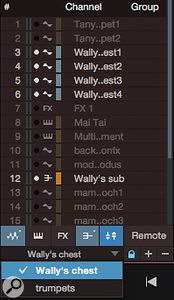 Screen 4: At the bottom of the track list are the console scene features. The drop-down menu on the left allows you to recall stored console layouts, while the controls on the right include buttons to add or delete a scene, and to lock the active scene so changes are not stored.

Once you’ve put together your ideal channel layout in the mixer, you can save it to a console scene by clicking the plus sign at the bottom of the mixer track list and giving it a name. Beware: changes to a console scene are saved unless the Lock Active Scene button is engaged.

Honestly, flower arranging is both a finer art and more pleasing than channel layout in a mixer, but it can be quite startling how much the aesthetics of the DAW environment affect both efficiency and effectiveness. Flexibility in arranging tracks and channels is crucial when there is more than a handful of either, and becomes mandatory for large track and channel counts.

Studio One’s options for channel handling are particularly useful in conjunction with submixing, but can be used in many different ways. Sure, making a channel layout is not quite arranging dahlias, gladiolus, bupleurum and aster, but it’ll do more to get you through a mix.