A Space Of Your Own

Convolution reverb has adorned productions for the past decade or so, recreating the sound of instruments playing within lavish concert acoustics, for special effects in post-production work, and virtual chamber reverbs that just keep on giving! In the not-so-distant days of Logic Studio 8 and 9, Apple provided users with a means of recording their own impulse responses — the Impulse Response Utility. The omission of this Utility in recent, downloadable versions of Logic Pro seems to have left users in the lurch, but there exists a way to create custom impulse responses using a lesser-known parameter within the Space Designer plug-in. This tutorial shows you how.

The first task is to generate a logarithmic sine sweep to act as a test signal when recording impulse responses. A swept sine wave allows for the full frequency range of the room to be 'sampled' with greater accuracy and repeatability than shorter signals such as balloon pops, and has a respectable signal-to-noise ratio. This stage is a little tedious to set up, and you may find that you are able to achieve this more quickly in an external audio editor, using a 'synthesize' function or similar. Nevertheless, the following steps describe how it's done in Logic:

It's now time to plug in microphones and record impulse responses. The basic process for rooms and other acoustic spaces is to play back the Sweep track through a loudspeaker in the room whilst re-recording the signal with one or two ambient microphones.

Condenser microphones are favoured here for their sensitivity and high frequency response, with omnidirectional patterns yielding the most ambience. Alternatively, directional microphones will work well placed high up in a room, and for a diffuse chamber reverb effect, turned away from the speaker. You also have the choice of mono and stereo impulse responses; stereo, of course, gives more of a sense of immersion, but mono may be perfectly suitable for special effects or localised reverbs applied to parts you don't want to 'spread out' into the stereo field.

Once the first impulse response has been recorded, mute it and create a new track for the next impulse response (for example, 'Kitchen 4m', 'Garage 5m' and so on). It's well worth recording with microphone(s) placed at different distances and heights in each room to give you more options — you'll be surprised how different they sound.

The final stage is to remove (deconvolve) the sine sweep from the impulse response recording, and then trim it to the correct length so we can load it into Space Designer. If this important stage was missed out we'd end up with a bizarre 10-second reverb, complete with eerie sine sweep! 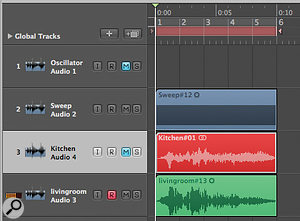 You now have an impulse response that can be freely used within Space Designer for mixing projects. Simply load in your new preset using the 'Load IR' function situated towards the left-hand side of Space Designer's graphical user interface. 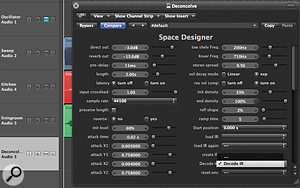 Although some sweat and tears are required, the process of creating impulse responses becomes easy once a template project has been created — allowing you to capture rooms, spaces and even hardware with ease and efficiency. Custom impulse responses will make more of an impact than you'd perhaps expect, helping your mixes stand out from other Logic productions that invariably rely heavily on Space Designer stock impulses. So, step away from your usual presets, try something different and start sweeping!