Many guitarists embark on the quest for great tone. Studio One Professional and Producer further this journey with the Ampire plug-in, a sophisticated guitar-amp simulator that offers a very broad palette of tones. (Studio One Artist includes a limited version of Ampire.) Given that PreSonus was founded by a journeyman guitarist and today still brims with string-slinging staff, this should not be surprising.

Ampire's versatility stems from its multiple tonal shaping features. Naturally, in a guitar-amp modelling system, it all starts with the models, and this is where we uncover Ampire's first secret trove of tonal treasure. The drop-down menu near Ampire's upper-left corner includes a dozen amplifier models covering most of the common variations: American, British and 'boutique'. These are PreSonus's second-generation amp models, so they are pretty refined recreations that provide all the basic tones from the classic amp manufacturers.

If, however, you select 'Legacy Amp' from the menu, you are granted access to 29 amp models from Ampire's original release that PreSonus have hidden away there. Clearly, PreSonus feel the newer models are superior, and I mostly agree with them, but I have several times found the right sound for a particular song by cruising through the older models — I like the '70s Double Blues model, in particular. While 'less is more' is a maxim drilled into our heads on a frequent basis, I have concluded that 'more is more' when it comes to amp models. Similarly, the cabinet model drop-down menu retains 10 earlier versions — including a virtual DI that bypasses the cabinet simulator altogether — in addition to the 11 new-generation models.

Now, 40-odd amp models plus 20-odd cabinet models represents a pretty wide tonal range, but that's just the basics. One of my favourite tone-sculpting tools in Ampire is the mic section, which contains settings for three virtual microphones, plus a super-'tweaky' parameter I'll get to shortly. First, the virtual mics bear some close examination. Each cabinet model has three virtual mics on it. The type and placement of the microphone varies with each cabinet model, though Mic A is most often placed at the edge of the speaker cone, Mic B at the centre of the cone, and Mic C at a distance. The box shows the specifics.

The magic comes in when the 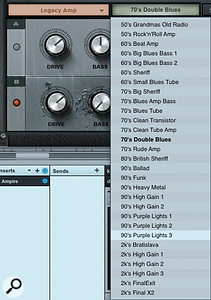 There are no fewer than 29 first-generation models lurking in the Legacy Amp model selection.three mics are blended. Click the Edit Mic button next to the cabinet model drop-down, and the grille cloth in the upper-right quadrant disappears to reveal the mic section. Just the five controls in this section are enough to yield a huge variety of tones. The most prominent control is a fader that lets you create a balance between Mics A and B. Mic C has a separate level control that adds it to the A/B mic mix, and Mics B and C each have their own delay controls, changing their distance from the cabinet. Combining two or three virtual mics creates a comb-filter effect, which can change the tone significantly, depending on their relative level and distance.

The mixing and distance controls provide a surprisingly wide range of tones without changing anything else about the amp or cabinet models. However, there is one last fader in the mic section, labelled 'Body' (though the pop-up tool-tip identifies it as 'Cabinet Length'). While its title probably refers to mimicking the effect of changing the guitar's body size, this control actually changes the length of the impulse response that Ampire is using for its convolution. Broadly speaking, shortening the length decreases low frequencies.

If you want to get an idea of just how versatile this system is, the audio examples that accompany this article were generated by only changing settings in the mic section. No other aspect of the cabinet or, for that matter, amp models was altered in any way.

Beyond the choices of amp and cabinet models and the mic section, there are two other bases for tonal shaping in Ampire. One place to try is the most obvious of all: tone controls on the amp model. The importance of bite in guitar tone is clearly seen from the fact that three out of six controls on the amp models deal with mid and high frequencies. As the amp model and its settings are the heart of guitar tone, these tone controls create a basic sonic quality that the rest of the tools will modify in some way, but rarely fundamentally change. If you set up a very bright amp tone, nothing you do later will really remove that high bite. Of course, that might be exactly what you're going for, but the point is that this simple set of controls has a fundamental influence on tone.

Another, more extensive, set of tone modifiers is available in Ampire's 'stompbox drawer'. Click the Stomps button in the top centre to reveal the stompbox processors. From the standpoint of tone, it is the first three boxes on the left that interest us.

Wah pedals can be great tonal modifiers, whether the centre frequency is moved or set in a sweet spot and left alone. You have a choice of four different wah-pedal models, which I present here along with the pedals they are modelling: PWO (Morley Power Wah), PWV (Morley Power Wah Volume), Cry (Dunlop Crybaby) and Fox (Vox). I really like the distortion of the Cry model, and I am interested that this box seems to be one effect that is able to recast the basic amp sound, as if you were changing controls on the amp model itself. Of course, if you want to play true wah-wah, moving the centre frequency dynamically, you can control the frequency with a MIDI controller through Control Link.

To the right of the Wah stompbox is the Tube Driver. This effect is a pretty straightforward, one-knob job... more or less. From a tonal standpoint, the degree of impact the Tube Driver has varies hugely with the tonal quality of the input. There's always an audible change at different settings, but only on some signals does it manifest itself in significant tonal change. Still, it can take a little sting out of a bright sound and add some body at the same time, which can be quite useful.

The last stompbox to discuss is the Equalizer. This is a graphic-EQ-style model with seven fixed-frequency bands. The Guitar and Bass settings change the placement of the centre frequencies; the Bass setting is an octave-band equaliser covering a much wider spectrum than the Guitar setting. To my ear, this box is not clean, as the Pro EQ 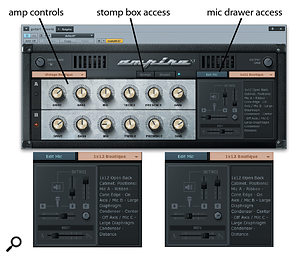 The amp and Edit Mic controls. The mic setting variations shown are the ones used for the audio examples. The call-outs show how to access the main tone-altering facilities.plug-in is, but adds some distortion, as nearly any actual stompbox EQ would. The most interesting part of the Equalizer is not even the distortion or centre frequencies. Since Ampire is not in the real world, it is easy to add a pre/post switch that can place the Equalizer on the output of the amp model, rather than before it. Let me tell you, there is a major difference in sound between those two settings.

Put On The Red Light

Wow, let's see: dozens of amp and cabinet models, sophisticated virtual miking, versatile stompbox emulations, and good old-fashioned amp controls. If you can't find an interesting tone in all of that, then maybe guitar-godhood is just not going to be your career path.

But, hey, anything worth doing is worth overdoing, so I'm going to mention one further source of guitar tone, this time outside of Ampire: the RedLightDist distortion plug-in. The offensively garish little user interface for this plug-in provides access to six different analogue distortion models, plus some other basic shaping controls. The most interesting aspects of RedLightDist to me are that the distortion 'circuit' can be set to use one, two, or three stages, and that there is a Mix control that lets you mix the distorted and original signals. Some very subtle effects can be created by mixing just a touch of distortion in with the original signal.

All in all, Studio One is chock full of ways to get all your favourite guitar tones, and make crazy new tones as well. As with physical guitar rigs, the trick is in figuring out the exact recipe for combining the available tools.

To hear how dramatically the sound of Ampire can be varied simply by moving and rebalancing Mics A, B, and C, check out the audio examples online: /sos/feb14/articles/s1media.htm.

These files accompany Larry The O's workshop on using Studio One's Ampire guitar amp modelling plug-in in the February 2014 issue of SOS. Example A is the raw guitar sound with Ampire in bypass.

LDC: large-diaphragm capacitor mic, such as Neumann U87.