Familiarise yourself with some basic concepts, and you'll be up and running with Pro Tools in no time.

In my travels through Pro Tools forums on the Internet, I find that very often the same basic questions come up again and again. It's been a long time since these were covered in this column so, over the next few months, I am going to concentrate on the basic features of the program. These points will be illustrated using screens from Pro Tools 11 but they will apply to Pro Tools 10 and earlier, too, so don't worry if you have an older system.

Before you do any recording in Pro Tools, you'll probably need to visit the Playback Engine and I/O Setup dialogues — and possibly the Hardware Setup dialogue too — to configure the software to work with your audio hardware.

A properly set up Playback Engine in Pro Tools is the difference between smooth operation with low latency, and stuttered playback and cryptic error messages that can bring you to tears. Study the manual for your system, as the dialogue does vary between different version numbers and between native and HD or HDX systems. The most important setting in the Playback Engine dialogue is the HW Buffer size; when recording, the usual aim is to set this to the lowest amount of samples you can achieve before Pro Tools falls over, to minimise the round-trip latency (the time taken for your input signals to travel through Pro Tools and back out 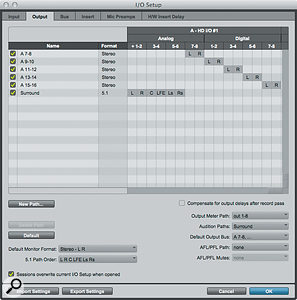 Above: The I/O Setup window is where you tell Pro Tools what inputs and outputs are available to it.

to your monitoring system). If you have alternative low-latency monitoring systems in place, or you're only mixing, you can employ a much higher buffer size to minimise the load on your system. This is less of an issue with Pro Tools 11 as Avid have separated the input and output buffer, but it is still helpful here too.

If you're having problems using Pro Tools 9 or 10 on a Windows machine with third-party hardware, it's worth experimenting with different HW Buffer sizes, as the relationship between buffer size and CPU load can be unpredictable. For instance, a size of 256 samples can often deliver better CPU performance than higher buffer sizes, for no obvious reason!

The I/O Setup window is where you tell Pro Tools what connections your audio interface has, and how these relate to inputs and outputs on tracks within your Projects. If you get a dialogue telling you that you can't record because you have no audio input, make sure you have the correct audio interface set in your Playback Engine, whereupon a quick fix is to click the I/O Setup window's Input tab and hit Default, then do the same in its Output tab. In many cases this will get you up and running. We will be taking a detailed look at the I/O Setup window in a future article in this series, as it can be confusing to even the seasoned Pro Tools operator.

A lot of newcomers to Pro Tools are confused by the different track types on offer. The full list is as follows:

Knowing what track to use can help keep your sessions tidy, speed up your workflow and, in many cases, may also save your system power. Again, we will take a closer look at these different track types, and when to use them, in subsequent articles in this series.

The same goes for clips and regions: name them sensibly, and if possible, be consistent with the way you name things, as it makes it so much easier to find things later. Because there are limited sorting options in the Clip List, I often use prefixes, so that related things group together alphabetically. For example, when I am doing a radio drama, all the dialogue is named with scene and takes so that alternate takes are very easy to find. All sound effects have the prefix 'fx' and music has 'mus'. All of these strategies make it so much easier to find material in a session. Get into this habit from day one: it will be well worth it.

Playlists allow the user to create multiple versions of the material on a track or tracks. For example, Playlists could be used to record several takes of a vocal or guitar solo to a single track, but they can also span multiple tracks, allowing you to record multiple takes of anything from a drum kit to an orchestra. The user can then select the best take later, or comp a 'perfect' take from all the takes of one part.

Playlists in Pro Tools let you record multiple takes of the same part, and assemble the best bits of each into a 'comp' later.

Playlists are an incredibly powerful part of Pro Tools, and you should definitely get into the habit of using them rather than creating a new track each time you want to record a take. For more details, see my article back in the May 2009 issue of Sound On Sound (/sos/apr09/articles/pt_0409.htm).

There are times when you need your audio and MIDI edits to fall precisely on a musical grid; but at other times, you need to be able to position material freely. In some circumstances it can be useful to have surrounding material close up automatically to fill gaps left by edits, or as a post-production editor, you might need your audio to coincide exactly with a picture cue. Pro Tools gives the editor all of these options through a group of four buttons in the top left-hand corner of the Pro Tools Edit Window, which can be chosen by clicking or by hitting the keyboard shortcuts '1' through to '4'. Learn how these modes work and you can fly around a Pro Tools edit.

In Shuffle mode, when you delete a segment, everything on that track will 'shuffle' up to close the gap created by removing the segment.

Slip is the only mode that will allow you to move clips around the Edit window freely and without restriction.

Spot is great for post-production editors as you can force a clip to snap to a specific timecode position to match a visual cue.

Grid mode is great for music production. With this mode active, any edits will snap to the nearest bar or beat as specified by the grid setting, which makes it easy to keep everything in time.

Track groups are the key to taking control of complex Pro Tools sessions. You can create as many groups as you like, and tracks can belong to multiple groups. Each group can be an Edit group, a Mix group, or both, and groups can be activated and deactivated in the small area at the lower left of the Edit window. 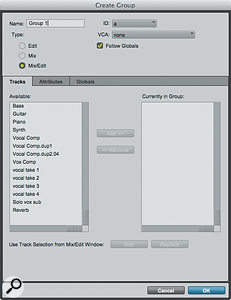 You can set up as many track groups as you like.

Edit groups, when active, apply any edits made to one track to all the tracks within that group. For instance, by grouping all of your drum tracks together, you can be sure that one track doesn't slip out of sync with the rest of them when you're editing and moving content around the session. Mix groups apply the same idea to mix parameters such as fader levels.

Clip groups are a way of grouping a complex edited set of clips across one or more tracks so that they stay together when moved or edited, but don't affect other non-grouped material on the same tracks. We covered Clip groups (which were called Region groups at the time) back in the October 2006 issue of Sound On Sound. To read the article, visit /sos/oct06/articles/ptworkshop_1006.htm.

Be sure to match your Pro Tools version with that of your computer's operating system. I have lost count of the number of times I have had to explain to someone why their system isn't working properly because they're trying to use an old version of Pro Tools with a much newer operating system. This often happens when people upgrade their computer so it has the most recent version of Mac OS or Windows, but don't want to upgrade Pro Tools at the same time. If you want to run an older version of Pro Tools go through the compatibility charts on the Avid web site (http://avid.force.com/pkb/articles/en_US/Compatibility/en353265 for Windows, and http://avid.force.com/pkb/articles/en_US/Compatibility/en436391 for Mac OS), and use the latest version of the OS that your version of Pro Tools is supported for. Anything else is going to cause you problems sooner or later.

Conversely if you have a new computer that can only run the latest version of the relevant OS, you must have the latest version of Pro Tools. For example, if you have a Mac with Mavericks, you need Pro Tools 11.1.2 or higher. The reason for this is that any application like Pro Tools is designed to look for hooks in the operating system so that it works in conjunction with the OS the way Avid designed it to. These hooks change between different versions of an OS, so it is essential that you run Pro Tools and the OS as a 'matched pair'.

Spend any time with a professional Pro Tools engineer and you'll see that he or she very seldom uses the mouse. Instead, keyboard shortcuts let the experienced user work faster and reduce the risk of repetitive strain injury. It doesn't take long to develop muscle memory and become a Pro Tools Ninja. The shortcuts are summarised in full at this useful web site: www.protoolskeyboardshortcuts.com/pro-tools-10-keyboard-shortcuts.