Mixing and automating complicated projects can be made simpler if you use 'stems'. Here's how you do it.

Any complex mix can seem daunting — even with automation. In the pre-automation days, a mix would be performed by several people clustered around the desk — mixing engineer, band members, tape-op, even the producer if he was back from lunch. Automation removes the need for this kind of socialising, but it can still be hard to keep a mix under control if you're working with an arrangement made up out of dozens of different audio tracks. The way I simplify things is to make use of the power of Logic 's bussing system to submix groups of tracks, a technique called 'stem mixing'.

Here's an example. I'm working on a song at the moment that has several drum parts in the Song. Some of these are being played back by FXpansion's wonderful BFD drum plug-in; other sounds are from Logic 's EXS24 sampler. I'm looking for a 'natural' drum sound for this project, hence the use of BFD, and I've chosen EXS24 samples to compliment this — there's a tambourine and timbale in there.

To complicate matters further, I'm sending the sounds from BFD to individual Buss objects for extra processing. While some editing of the MIDI data that is playing the drum sounds can be used to adjust the various individual drum hits, I'll still want to use automation to control various levels and plug-in parameters.

In the header screenshot you can see a multiple-output version of BFD delivering its individual outputs to ten different Aux Audio objects — it's shown in the Environment window, because I find it easier to deal with when using multiple-output plug-ins in Logic, especially as you can give each plug-in's Aux and Buss objects their own Layer. As you can see, there's some pretty complex routing going on here to get the outputs exactly the way I want them. All the Aux and Buss objects are ultimately routed through Buss 15 and then to the main outputs. Note also that I'm using BFD 's stereo Instrument object to supply the drum overheads, so this is also routed through Buss 15. The copy of the EXS24 Instrument is alongside all of these objects so that I can control all my drum sounds from the one Layer.

When you create any Audio object (or any Environment object for that matter) which you want to adjust via automation, you need to make sure the box next to the icon in the Parameters box is ticked. By doing this, you'll make the Aux or Buss available for use in the Arrange window and thus in the Track Mixer. You could automate these Busses and Auxes directly from the Environment, but it's easier to use the Arrange page and Track Mixer for this purpose.

As the Track Mixer only displays controls for tracks in the Arrange page, you first want to make sure that the Auxes and Busses we need to automate are assigned as Track Instruments there. If you click and hold on an Arrange-page track, you'll see all the Audio objects from the BFD Environment Layer in the pull-down menu.

The way you use Logic 's automation depends, to a large extent, on your recording background. If you are from the 'old school', used to using tape recorders and mixing desks, you'd probably be more comfortable with some kind of hardware controller, such as Logic Control or one of the recent Behringer models. If you were brought up using computers, the mouse and keyboard might be a more comfortable way to work.

In my case, perversely, I prefer the computer-only approach — though that's not to say I don't like to twiddle the occasional knob now and again! Using the mouse to turn on-screen controls allows for a kind of linear (and to my mind, easily navigable) approach to automation, as you're forced into adjusting one parameter at a time. It can be difficult to fine-tune some parameters, especially those controlled by on-screen circular knobs, but you can often enter values directly by double-clicking on the numerical read-out. Third-party plug-ins use varying methodologies for fine control. With the Universal Audio UAD1 plug-ins, for example, the closer you click to the centre of the on-screen knob, the finer the control is. Unfortunately, there's no 'standard' method in use by different companies. Perhaps we need SWOCOK (Standard Way Of Controlling On-screen Knobs) to complement MIDI...

With this kind of complex setup I usually pack groups of Aux and Buss tracks into folders to make things easier to manage. Logic 's folder implementation can be a little flaky however, so it's a good idea to double-check that the correct tracks have actually been moved into the folder. As you can have different Screensets showing different levels of the Arrange page, you could, for example, have one showing all the tracks at the top level of the Arrange page and one showing the contents of the folder.

If I want to automate the overall level of the complete drum group, I route the outputs of all this Environment Layer's Audio objects through another Buss and add that to the Arrange page as well. This 'combination' Buss is also useful if you need to compress or flange the whole drum mix or add a specific ambience. For instance, I often use a Space Designer plug-in on this Buss with a nice 'drum room' impulse to blend disparate drum sounds so that they sound more convincingly as if they were recorded in the same room.

Finally, check that Logic 's Plug-in Delay Compensation (PDC) is set to All in the Audio Preferences. If you don't do this all the audio being sent through the Auxes and Busses will be out of time with any other tracks.

So now everything is ready to record the automation data. With this kind of drum setup I'll often run through the Song and listen carefully to see if anything needs adjusting.

Here are some typical problems I might come across. Individual drum levels may be inappropriate for different parts of a Song — for example, I'll often find that the snare drum is too quiet during a chorus or too loud during a verse. I may find that the whole drum mix needs a 'lift' at the chorus or at the end of the Song. I may want to change the ambience settings of the whole drum mix or individual drums during quieter sections. Once I've decided what needs doing, usually with a crib sheet of timings and notes, I'll start to automate. 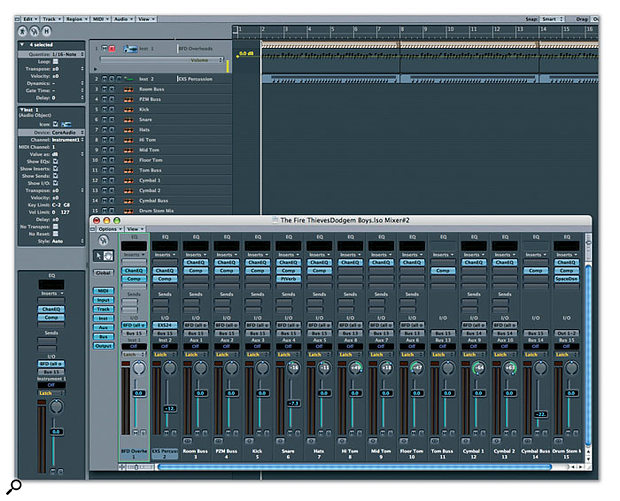 Here you can see a useful Screenset for automation purposes, with Track Mixer and Arrange windows visible. An alternative is to have a separate Screenset for each window.

First I select Track Automation from the Arrange page's View menu. Choose Turn On Automation For All Tracks when Logic asks you to. You may also want to turn on Auto Track Zoom from the same menu, as it's handy seeing more detailed automation data when selecting a Track.

The first thing I usually deal with are levels. Playing from the start of the Song, levels are easily adjusted using the Track Mixer sliders as Logic plays. I don't worry too much about total accuracy here as I can always fine-tune the automation curves with the mouse later, as I discussed in last month's article. Even so, I'll often run through the Song several times to change or fix the automation, using Latch mode so that Logic only overwrites the automation data you want to change, leaving previously recorded automation alone when you stop moving the faders.

During the process I'll usually set the automation mode to Read for any track that I'm finished with, as I'm forever accidentally catching a slider on my control surface and wondering why the snare drum is suddenly at deafening volume from the 20th bar of the Song!

Once I'm happy with the basic volume levels, I'll turn to the effect plug-ins. I tend to automate these individually rather than trying to adjust several plug-ins at once, so I usually just use the channel-strip display in the Arrange window's Parameters to access the particular plug-in I'm currently wanting to work on.

A typical automation procedure might be to adjust the whole drum mix's compression at different sections of the Song. Perhaps the verse needs a more 'natural' sound while the chorus needs to be compressed a little more so the drums fit in better with a more cluttered arrangement. In this example I've selected the drum stem mix Buss in the Arrange window and opened the Compressor from the Parameters box channel strip. If I need to change the Threshold or Ratio parameters to suit the Song, this of course also changes the overall level of the drum mix, so I'll have to go back and adjust the levels again.

Another parameter I often automate is the reverb level on the snare drum, increasing the 'wet' level and the reverb time during the sparser verses and reducing them during the choruses. It can help to loop around a section of a Song, perhaps a verse leading into a chorus, in order to adjust the parameters at each pass until they're just right. 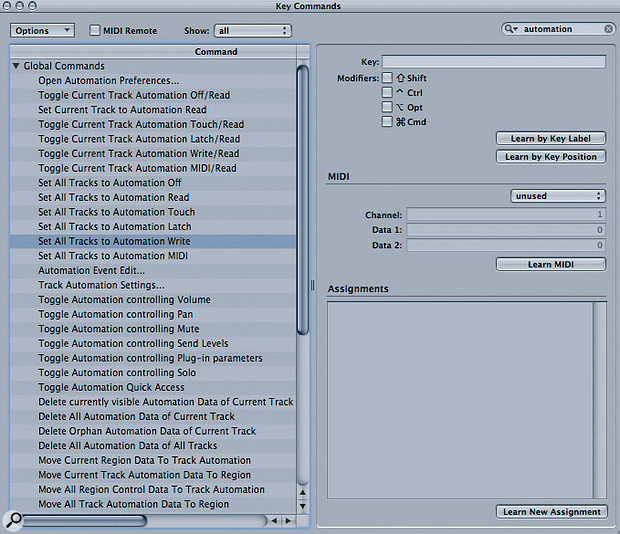 One of Logic 's best features is, of course, its Key Commands. Here are some of the ones which are most useful when automating.

Using the stem technique makes mixing and remixing much easier. For example, if you have Buss objects set up for drums, guitar, backing vocals, basses, strings, and keyboards you can easily automate the levels of each of these groups of instruments. Plus this approach makes it much simpler to process whole sections of your mix, by simply inserting plug-ins on the different Buss Audio objects.