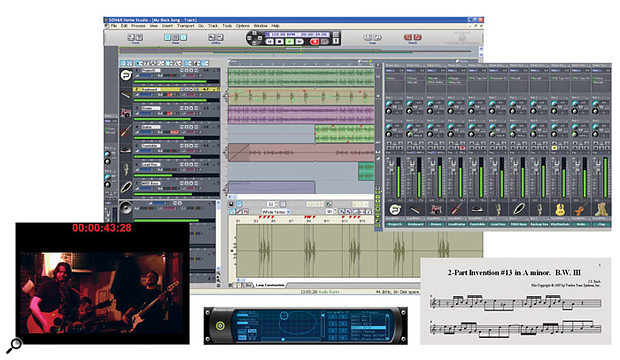 The Sonar Home Studio Version 4 series has much of the 'look and feel' and feature set of Sonar 4, but at a considerably lower price.

Sonar technology takes over Cakewalk's entire product line, from low to high end, while the Studio and Producer editions get an audio engine tune-up.

The new Sonar 4.0.3 update, available free to registered Sonar 4 users from www.cakewalk.com, is a maintenance update for Sonar Studio and Producer editions whose major enhancements were based on user requests. When Sonar 4 was first introduced, Cakewalk said that they planned to produce more frequent small updates, rather than waiting to bundle them together into 'bigger' updates. Version 4.0.3 follows through on that promise.

The major enhancement is continued audio engine optimisation. This doesn't only affect 'simple' tasks such as copying, moving, splitting, slip-editing and so on; it also improves performance when you're inserting and deleting effects, inserting and deleting tracks or busses that are routed to existing audio ports, opening up a VST plug-in's interface and enabling or disabling looping. Drop-outs under heavy CPU loads are also now less likely.

On a less dramatic level, in 'sound-on-sound' mode, auto-punch recording of audio or MIDI to the same track now defaults to muting previous takes, although you can alternatively retain the existing default, where previous takes are not muted. Finally, the Transport menu offers a 'Set Timecode at Now Time' command, which provides a convenient way to sync an audio score to external video.

And, of course, what would an update be without bug-fixes? My favourite one solves a problem that really annoyed me: sometimes (but not always) I'd hear clicks that seemed related to graphics — for example, when dragging a window or opening a particular dialogue box. Those are now gone. Another fix ensures that muted regions in clips remain muted even while audio that contains the muted section is looping (this wasn't always the case). Also, when you open a file, audio and MIDI track strips are set to the last known height, rather than reverting to the default. I don't know if I'd consider that to be a serious bug, but the change is definitely an improvement.

Another major fix relates to the occasional mismatch between actual audio levels and recorded volume automation data — now they match. Finally (for this little round-up, anyway), it's no longer possible to record onto an archived track. There are other fixes: you can check out the complete story when you download the update.

What Happened To My Loop Preview Command?

Have I found a bug? No, it's a feature. Shift + Space bar is now the universally-applicable 'Audition' function, and there is no longer a keyboard equivalent for Preview Loop in the Loop Explorer... but you can make your own.

So what does it all mean? Clearly, Sonar Producer and Studio editions are positioned as the 'pro' platforms, and Cakewalk are also working to keep these programs current with their philosophy of frequent updates. Coupled with the benign copy protection (but how long will they be able to keep it in the face of absurd levels of software theft?), this shows real customer support for their core market. But the Sonar Home Studio line is pretty significant in terms of offering value for money to those who aren't ready, or maybe don't even want to take the plunge and get a 'pro' program that costs a fair bit of money (ie. Sonar Producer Edition). I suspect that Sonar Home Studio 4 will meet most or all the needs of many lower-end users, but some will probably become hooked on the Sonar way of doing things and will eventually step up to the Producer or Studio edition.

In any event, Cakewalk continue to move aggressively to increase market share and bring a new generation of users into the fold — quite a change from the somewhat sleepy company of a few years back that was content with the Pro Audio line. In hindsight, Sonar 's introduction wasn't just about adding another program, but being the first in an entirely new generation of products.