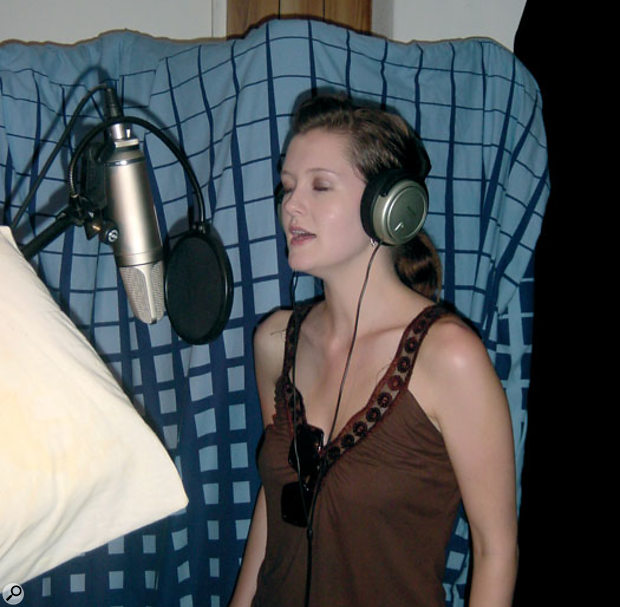 Getting a good vocal sound required draping a duvet behind the singer (Jessica McPherson) and taping a pillow to the mic stand — this reduced the level of room sound reaching the mic, resulting in a less coloured and more usable sound.

This month's Studio SOS comes to you from the other side of the world, as we help a reader in Sydney sort out his vocal recordings.

If you were to drill straight down into the floor of the SOS offices in Cambridge, around 7000 miles later you'd emerge within spitting distance of Phil Evans' private studio, Chorus Music & Media, but in the interests of health and safety, we opted to fly. Phil is a full-time professional musician who runs his studio from his home in Wahroonga, a northern suburb of Sydney, working on his own material as well as demos for friends and clients. Phil was a Logic user until Apple discontinued the Windows version of Logic, since when he's switched to Steinberg's Cubase SX 3 and is finding some aspects of the transition quite difficult to come to terms with. He prefers Logic, but because he relies on other Windows applications, he's not prepared to move over to a Mac.

His only keyboard is a Korg 01W workstation and he's recently purchased an Echo Layla 3G audio interface to complete the system. His PC has had some cooling modifications to make it quieter, though not as quiet as he would like, and his Alesis Monitor One MkII speakers are driven by a beefy Sansui AU317 hi-fi amplifier. Currently, Phil is working with singer Jessica McPherson, and was keen to see if he could improve on the vocal sound he was getting. He'd also experienced a few little technical problems that he needed help with.

While Phil was working on making the first cup of tea of the day, I checked out the monitoring system. The Alesis monitors were set up on a shelf above the control desk facing straight ahead, and they were also a little too high for Phil's seated listening position, so I suggested we angle them in and down so that the tweeters faced directly towards his listening position. We achieved this using some small blocks of wood to prop up the rear of each speaker, and to my ears this improved the imaging, giving a better phantom centre image and a wider sweet spot.

The room itself was around five metres square and about half that in height, which is less than ideal for a studio, as all the room modes tend to pile up at around the same frequency causing large peaks and dips at low frequencies. Phil had tried to improve this by screening off about one metre of the back of the room using heavy curtains, with sheets of foam and other material suspended behind. As the Monitor One MkIIs don't have huge bass extension, the bass end turned out to be reasonably even at the listening position, though there was the inevitable dead spot close to the centre of the room, where the bass dropped in level. A large foam upholstered corner sofa also helped soak up unwanted audio energy, and as the side walls were quite a long way from the speakers, it didn't matter too much that these were reflective rather than absorbent. A square metre or so of acoustic foam on the side walls opposite the listening position might make a small improvement, but the room turned out to be quite workable. I did however suggest that if he upgraded to larger monitors with a greater bass extension, then he should consider stacking a few rolls of rockwool loft insulation behind the curtain at the rear of the room to help with the bass trapping. 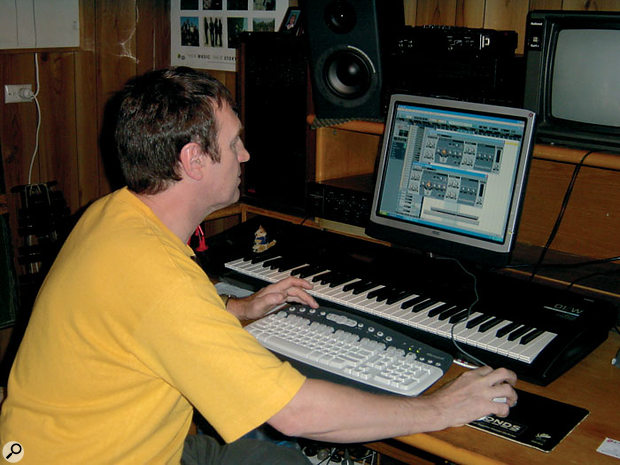 Phil's main technical problem was that he'd noticed occasional clicks when trying to record the audio outputs of his Korg synth, set to a piano sound at the time, but in fact the clicks affected all the synth sounds. His sequencer's audio interface was set to use a buffer size of 256, and the audio levels were nowhere near clipping, so I suggested he try the variable-gain mic/line inputs on his Echo interface just to check whether there might be something odd about using that particular synth with the Echo's line ins. As I half expected, this turned out to have no effect on the clicking problems.

Playing soft synths via MIDI showed up no such problems, so it seemed that only the audio input was being affected. We also tried feeding the Korg via a small Behringer mixer before going into the Echo interface in case there was a matching issue, but that didn't help either. We checked the headphone outputs on the Korg and on the Behringer mixer and there was no problem there, so that ruled out a weird clipping problem that the meters weren't showing up. I got Phil to switch off his graphics card's accelerator mode, as that can sometimes cause problems, but again to no avail.

Phil was at first pretty sure that the clicks didn't appear when recording vocals, but when we ran some tests to confirm this, we also found clicks, and examining the audio waveform in Cubase, we discovered narrow spikes. Subsequent enquiries to Echo revealed that the driver exhibits a bug that causes clicks when the unit's MIDI interface is also being used, but they told Phil that they expected to be releasing a fix within a week or so.

Another mystery was a high level of digital noise and hum audible over the monitors, but only when Cubase was running. Other audio applications, such as Mackie Tracktion and Adobe Audition seemed to work without causing noise. This noise didn't get onto the mixes, which Phil did via internal bounces, but it was distracting when mixing. It will be interesting to see if this goes away when the new Echo driver becomes available.

The next stage was to move on to recording some vocals, with Jessica sportingly obliging to be our guinea pig. Phil had been recording with the mic facing his curtain, which cut down on some unwanted reflections, but there were still noticeable reflections from the side wall. He'd also set up a lightweight oriental-style folding screen behind the mic to try to isolate the computer noise, but this was really too light to have any significant effect. 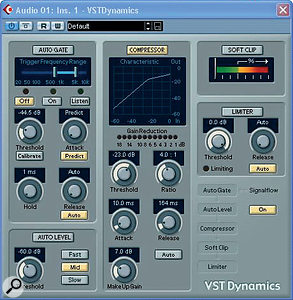 To try to improve the situation, I draped a large duvet over the screen and placed this against the side wall to create an absorbent corner. The curtain room divider formed the other side of the corner. Jessica sang with her back to the corner, but to further reduce reflections and sound from elsewhere in the room I also taped a pillow to the mic stand, behind the mic — a Rode NT1000 — which I turned upside down so the pillow's acoustic shadow would fall in the right place. It might not have looked very sophisticated, but we got a great dry vocal sound straight off. Jessica has a fairly bright voice, and the NT1000, having a significant presence peak, produced a slightly aggressive sound, though nothing too serious — we could have got a usable sound with a bit of careful EQ or mic repositioning if we'd had to. However, we also had a Rode NT2A available, which is actually a very different microphone, with a smoother overall sound, and with Jessica's voice this produced a sweeter, more musical sound that we could use with very little additional EQ.

The compression setting that Phil was using was already fairly good, with a 4:1 ratio, a 10ms attack time, and a 100ms release time. I readjusted the threshold setting to give 4-6dB of gain reduction and it sounded fine, adding density without otherwise compromising Jessica's excellent and well-controlled voice. A little EQ, pulling back at around 2kHz, dealt with a little remaining mid-range harshness and I added just a hint (1.7dB) at 10kHz to create the contemporary 'air' effect. EQ above 10kHz is usually well above the area where singers tend to have their natural presence peak, so it tends not to make the sound any more aggressive. At this point we had a great sound that only needed reverb to make it sit properly in the mix.

Once the compression and EQ had been sorted out, Paul set about creating a suitable vocal reverb. For the more uptempo songs, this shorter 'early reflections' style patch (above) was used, but this was chained with a brighter and longer patch (below) for the ballads.

Phil had downloaded the new Steinberg Roomworks reverb plug-in (from www.steinberg.net) and I was keen to try this as I hadn't had the opportunity to use it before now. Phil had tried a number of traditional reverb sounds, but as so often happens they had pushed the vocal back in the mix and tended to fill up space in the mix. I tried a few of the presets and eventually settled on High Frequency Reverb as a starting point, setting the delay time to 2.12 seconds with 60ms of pre-delay. I dropped the diffusion to 11 percent, set the high-frequency damping to 126 percent and the low-frequency damping to 10 percent, the aim being to get a more ambient, 'early reflections' type of effect. With a reverb mix of around 20 percent, this produced a very nice, up-front sound with a good sense of space but with no clutter — almost like a bright ambience program. Everyone agreed the result sounded much more contemporary and 'right' than the previous more obvious reverb setting. I thought this new Roomworks reverb plug-in was noticeably better than the old one, and as it's apparently a free download for Cubase users, anyone else dissatisfied with their existing Cubase reverb might want to give it a try.

On a previous Studio SOS visit, I combined two Cubase reverbs to create an effect that I couldn't get from one on its own and decided to try that here to see if we could conjure up a reverb suitable for some of Jessica's more ballad-like songs. We kept the reverb I'd just come up with but followed this with a bright plate patch using a 3.22-second delay time and a pre-delay of 115ms to keep it out of the way of the early reverb. With a balance of around 25 percent, this added a low-level reverb tail without clouding the sound, and produced a nicely controlled sizzle at the ends of words and phrases. Phil liked both these settings and saved them. On balance, Phil was pleased with the low-tech improvements we'd made to his vocal recordings and he has since made other recordings using this system and reported good results.

"Thanks so much for your visit to my studio — I'm still buzzing! I really did find a lot of your tips very helpful, and after you left Jess and I recorded a short demo of some National Anthems for her to audition for a rugby gig, and I really was pleased with the vocal sound. I noticed several more spikes in the track, and must confess that I have recorded many other tracks with the same problem but have had to work around it by recording small sections at a time and editing them together. Let's hope the new driver sorts things out!"