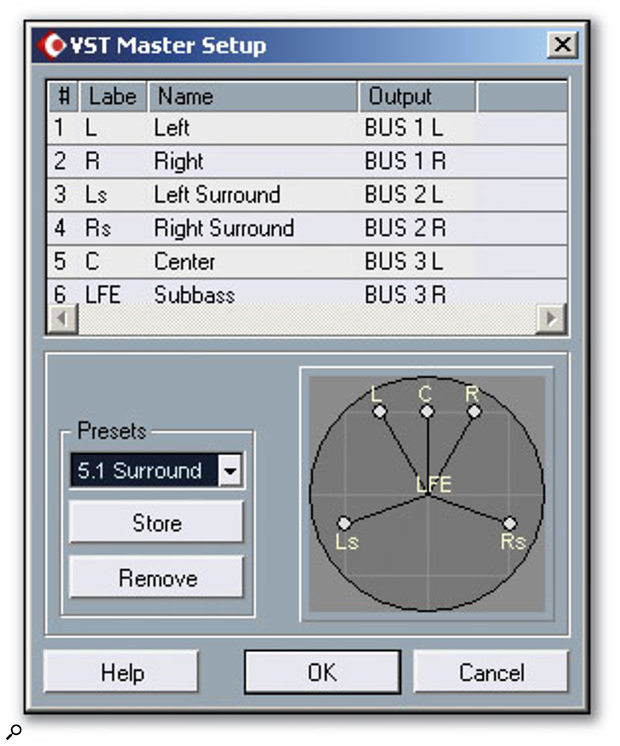 Figure 1: The VST Master Setup window allows a surround format to be selected.

SOS has always taken a strong interest in surround sound (see Hugh Robjohns' extended series on the subject starting in the August 2001 issue). Now the continued consumer success of the DVD format — and the consequent drop in prices of DVD writers — is encouraging many musicians to think about creating music for surround sound playback, whether in an audio-only context or with music-for-picture in mind. Add Cubase SX to a basic multiple-output audio card and budget 5.1 speaker set, and, for the purposes of experimentation at least, all the necessary equipment is in place.

Both SX and Nuendo offer plenty of scope for recording and mixing in surround sound formats. Unlike Nuendo, SX can only go up to 5.1 — but as that is the most popular format, this is not too much of a constraint. Both support 5.0 (3/2 — five main channels but no LFE channel) and the four-channel L, C, R, S configuration that formed the basis of the original film surround-sound format.

When you're creating a new project, the VST Master Setup window (from the Devices menu) allows the surround format to be selected (see Figure 1).

The '5.1 Surround' option (as selected in the screen shot) is the most commonly used. The alternative 5.1 formats simply specify the six channels in different orders, and it would obviously be important to check what is required in this respect if delivering a surround mix in a commercial context.

From here you can check that the required hardware outputs are assigned to the L/R, Ls/Rs and Centre/LFE channel pairs. 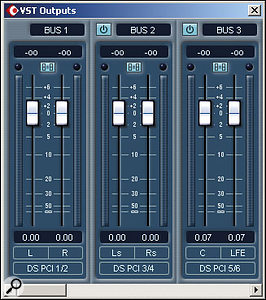 Figure 2: Hardware outputs are assigned in the VST Outputs window.

One of the key advantages of surround-capable software is that it avoids the need for hardware surround panning controls. The software panning features of SX are well implemented. Clicking on the buss at the base of a mixer channel summons a pop-up (see Figure 3) and from that the audio track can be routed to either a single channel or to a surround panner. Selecting the latter changes the usual left-right pan control at the top left of the channel fader into a small surround panner. While this mini-panner can, of course, be used for panning, far more control is available if you double-click it to open the full Surround Panner window (Figure 4, opposite).

Some of the controls here are relatively straightforward, while others require a little more explanation. On the simple side, holding down the Alt key and clicking on one of the speaker icons will toggle that particular speaker on/off. Also fairly straightforward is the LFE slider, which (as you'd expect) controls the level of the channel routed to the LFE channel, which will in turn appear at the sub-woofer speaker. Simple as this control is, however, some thought needs to be given to how it is used. The LFE channel is low-pass filtered and, in a film-audio context, is predominately used for the types of sound effects that make your teeth rattle. On the whole, music would be kept in the five main channels — all of which should have full range (20Hz­20kHz) speakers attached to them, so they should not be short of bass response. For music-only projects, there are no rules, however, so if your drum & bass track needs to get the furniture moving, feel free to experiment! The downside of using the LFE channel is that some of that bottom end may be lost when the mix is replayed on a system without an LFE channel. 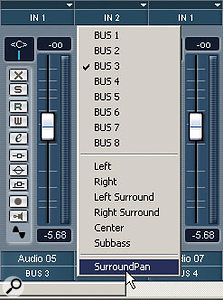 Figure 3: Individual audio channels can be routed to the Surround Panner via the pop-up in the Mixer. Also simple in use is the Centre Level slider, which influences the stability of the spatial image across the front three speakers. A little experimentation soon reveals the noticeable difference between a 'phantom' centre image and a 'real' centre image. For example, if a stereo (in the 'two-channel' sense) track is spread mid-way between the L and R speakers and the Centre Level control is set to zero, the sound is replayed via only the L and R speakers and a 'phantom' centre image is created, exactly as in standard two-channel stereo playback. If the Centre Level slider is slowly pushed up, this 'phantom' centre is gradually replaced by a 'real' centre image, and sounds positioned in the centre (such as kick and snare drums) take on a slightly more solid feel. This effect is more noticeable as the listening position is changed off centre — 'real' centre images tend to be more stable and don't follow the listener towards one speaker or the other. With a mono sound source, the effect can be different again, with the 'phantom' centre often seeming a little more spread out compared to the 'real' centre derived from just the C channel.

Immediately beneath the panning area is the mono/stereo pop-up. With a mono track, this will default to 'Mono Mix' and a single panning ball will appear that can be dragged around between the various speakers. in the case of a stereo track, two panning balls appear and a number of different options are available that influence how the balls are mirrored within the panner — but only one ball needs to be dragged and the other will move in a symmetrical fashion, either around the X (left-right) axis, Y (front-back) axis, or both axes (opposite quadrants in X-Y space). If Mono Mix is selected for a stereo track, the signal is summed to mono prior to panning.

Finally, the divergence controls alter the balance between the various speakers when panning. Some experimentation is needed to get to grips with these, but they tend to make panning moves sound somewhat less extreme. 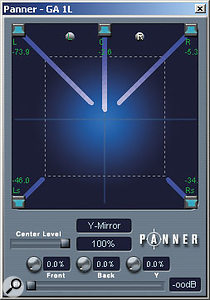 Spin Me Right Round

As with other Cubase plug-ins, the parameters of the Surround Panner window can be automated. Activating the Write button for a particular channel means that any changes made within the Surround panner are recorded and will be reproduced during playback if the channel Read button is activated. This includes movements of the panning ball, Centre Level slider or LFE slider. However, if you're inclined to move sounds around within the surround field, editing the resulting automation data can require some patience.

As shown in Figure 5, the automation data generated by the panning ball motion is divided into two lanes — one for the front-rear balance and another for the left-right balance. If you wish to fine-tune the pan automation, both lanes of data need editing and this often means moving back and forth between lanes to get the right end result.

Mouse movements of the panning ball can be restricted to left­right only (Shift key), front­back only (Ctrl key) or diagonally (Alt or Ctrl Alt, depending upon which diagonal is required). Those who like the efficiency offered by Key Commands might want to consult the 'No Handy PanKey' box.

While SX is able to deal with surround-ready plug-ins, aside from the Mix6to2 (which simply provides a basic means of re-balancing the six channels down to a two-channel stereo pair), none are provided. However, stereo plug-ins can still be used for surround applications.

Figure 5: Automation data for surround panning. Figure 6 shows a common example: three Dynamics plug-ins have been added to the VST Master Effects window (one for each two-channel pair of the 5.1 configuration). In a surround project, each effects slot includes a six-channel routing box, allowing the stereo effect to be applied to a particular channel pair (L/R, Ls/Rs or C/LFE) in the 5.1 mix. If you're using a limiter or compressor in this way, some care is needed with the Centre/LFE pair, so that any special sub-bass effects don't cause the centre-channel levels (which often contain key elements such as vocals) to be over-compressed. 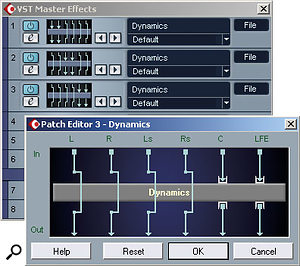 Figure 6: In a surround project, two-channel effects plug-ins can be applied to individual pairs of outputs via the VST Master Effects window. Another useful trick is setting up two reverb send effects and routing one to the Master Buss (which will therefore be sent to the L and R speakers) and one to Buss 2 (which will generally be the Ls and Rs speakers). Send levels for a particular audio track can then be used to place the reverb from that track either in front of or behind the listener, regardless of where the dry signal is panned. If the second of these reverbs is given a slightly different character, and perhaps a longer pre-delay time, this can add an extra sense of 'space' to the sounds.

There are, of course, also a few things to avoid doing with surround, and over-use of wild panning is certainly one. It's great for a special effect but it soon becomes simply distracting for the listener. Another no-no, for reasons briefly mentioned above, is over-dependence upon the LFE channel. Having said that, while surround mixing conventions are reasonably well established in film, for music-only mixing there are not yet that many rules set in stone.

SX allows either a split (six mono audio files) or a single interleaved file to be exported as the final mix. This is done via the 'File / Export / Audio Mixdown' option, as with two-channel stereo files. What SX will not do, however, is AC3-encode that six-channel mix so that it is suitable for inclusion, for example, as part of a video project on a DVD. AC3 encoders are not cheap. For example, the AC3 add-on for Nuendo costs around £650, a good chunk of which covers licensing costs from Dolby. Fingers crossed that, with time, as more users want to do their own AC3 encoding, these costs will come down.

The Operation Manual for SX suggests that many of the controls in the Surround Panner can be controlled via Key Commands. Indeed, clicking on the Panner logo in the Surround Panner window and then clicking again brings up a list of these Key Commands. I'd be very grateful if someone tells me I'm missing something obvious here (please!), but in my PC version of SX (v. 1.0.5.58), I cannot get any of these to function.

Oddly, they do work as advertised in Nuendo (v. 1.6.1, because at the time of writing I'm still waiting delivery of my v.2 upgrade) where, in the Key Commands window, the Surround Panner options are listed under the Process Plug-in options. The Surround Panner does not have an entry in the same section of the SX Key Commands list.