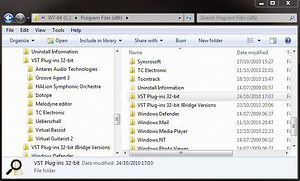 It's well worth creating your own folder structure for 32‑bit plug‑ins, especially if you intend to use the third-party jBridge rather than Cubase's own VST Bridge.

If you're a Cubase user still working in the 32‑bit world, but interested in what the 64‑bit version of your DAW has to offer, is it now time to make the move? Robin Vincent discussed some of the potential advantages and pitfalls of moving to a 64‑bit OS in SOS November 2010, but in an attempt to answer that question for you in a Cubase-specific way, I'll share a few tips and pointers from my own recent experience of this process. While this is very much a PC‑based view, there should be plenty that is of interest to Mac‑based Cubase users too.

Be A Good Boy Scout

Moving from 32‑bit to 64‑bit can involve a considerable amount of software installation work, and it pays to 'be prepared' before you start — so make sure you have all the necessary install disks, serial numbers and update patches to hand, and you should also be checking for 64‑bit availability of all your key effects and virtual instrument plug‑ins.

For those currently using a 32‑bit OS (as I was, with Windows 7), the first significant question is whether to retain the existing 32‑bit OS and create a second partition for your 64‑bit OS (multi‑booting between the two) or to replace the 32‑bit OS partition with a 64‑bit one. Note that Windows 7 doesn't allow an install of the 64‑bit version over the top of the 32‑bit one: Windows 7 64‑bit requires a 'clean' install. My experience of the multi‑boot options built into Windows 7 is that they're pretty robust, so if hard-drive space allows, I'd suggest keeping your tried and trusted 32‑bit environment and build your 64‑bit equivalent in a second partition — or you could install it on a separate physical drive if you prefer. Better safe than sorry!

Martin Walker has covered creation of new partitions and multi‑booting a number of times in SOS (see our web site for past articles), but it's worth adding one minor tip: while the Windows 7 boot management seems to operate well, you might consider a third‑party application to tweak its settings. There are a number of free and shareware applications available that can make life a little easier. I use EasyBCD from NeoSmart (www.neosmart.net). 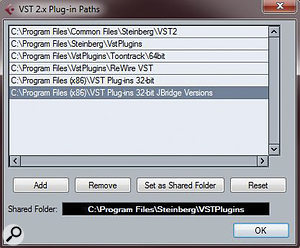 If you use a custom folder structure, make sure the correct paths are listed in Cubase via the Devices / Plug‑In Information / VST 2.x Plug‑In Paths dialogue box.

Of this key list, many of the Komplete plug‑ins are now 64‑bit, while Halion 3, HSO and SD2 are also 64‑bit. The others, at the time of writing, were only available as 32‑bit plug‑ins. In principle, this shouldn't pose problems, because built into Cubase 64‑bit is VST Bridge, which is designed to allow 32‑bit plug‑ins to communicate with Cubase 64‑bit. In practice, though, some users have still encountered problems (search the Steinberg forums and you'll soon find some examples). I'll return to this point later.

If this is your first step into the world of 64‑bit music making, the common‑sense approach would definitely be 'keep it simple'. To that end, having installed the 64‑bit OS (and done all the necessary updates and security patches), you should then install just your audio drivers and the 64‑bit version of Cubase 5, plus any updates necessary to get you to the latest version (v5.5.1 in this case). Now it's time for some thorough testing: the key issue is likely to be how robust your 64‑bit audio drivers are, so stretch the system as hard as you can using just Cubase 5 and its built‑in plug‑ins. 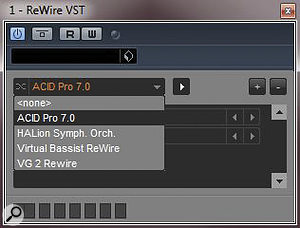 Rewire VST: a neat way to provide Rewire functionality in the 64‑bit version of Cubase.

Windows 7 puts all the 64‑bit applications in the usual Programs folder and also creates a Programs (x86) folder for any 32‑bit applications, but a little extra care and user intervention can be required when installing plug‑ins. For example, plug‑ins that have both 64‑bit and 32‑bit versions will get placed into suitable VST plug-in folders under both the Programs and Programs (x86) folders. While keeping the 32 and 64‑bit versions well away from one another is a good thing, the default locations used by the various installers may not be optimal. It therefore makes sense to install all your third-party effects and instrument plug‑ins into a folder structure of your own choice.

This is particularly useful if, as described by Robin Vincent, you intend to use the very popular jBridge alongside (or instead of) Steinberg's own VST Bridge. jBridge is a good investment (about €15 from http://jstuff.wordpress.com/jbridge/) and seems to deal with some plug‑ins much better than VST Bridge. However, 32‑bit plug‑ins have to be 'scanned' by the jBridger utility to create a bridging file, and it is the folder containing the bridging file that has to exist as a VST plug‑in path in Cubase. While there are various ways you might organise your 32‑bit plug‑ins, I simply created two folders under the Programs (x86) folder: one named 'VST Plug‑ins 32‑bit' and a second named 'VST Plug‑ins 32‑bit jBridge versions'. When installing my third-party 32‑bit plug‑ins, I made sure they all went into the first of these (with subfolders for plug‑ins from different manufacturers), and the bridging files created by jBridger into the second.

Usefully, jBridge also supports bridging of 64‑bit plug‑ins in a 32‑bit host. If your original plug‑ins and jBridge versions (both 32-bit and 64‑bit) are well organised, in principle, at least, you ought to be able to switch seamlessly between 32‑bit and 64‑bit versions of Cubase, with access to your plug‑ins in both hosts.

For my own part, I was very happy to find that my key instrument and effects plug‑ins listed above worked fine in Cubase 5.5.1, VST Bridge dealing with the 32‑bit ones. While installing and testing one plug‑in at a time may take longer than installing everything in one go, I think it's a less painful experience than doing a mass installation and then having to unpick things later as you discover problems. 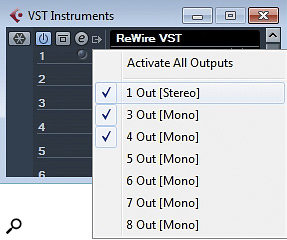 Rewire VST allows one stereo and six mono audio channels to be returned from your Rewired client.

One of my main reservations about moving to 64‑bit was the loss of Rewire support — but thankfully there's a third‑party solution in EnergyXT's Rewire VST (www.energy‑xt.com). This virtual instrument can be added to a Cubase project in the usual way, and allows you to 'Rewire' another application via the plug‑in. While only one instance of Rewire VST can operate at a time, it does support the transfer of one stereo and six mono audio channels from the Rewire client back into Cubase, and allows the Cubase transport and tempo to control the client.

On my PC system, this worked a treat with Acid Pro, and compared with using the built‑in Rewire support of Cubase 32‑bit, the only significant difference was that I couldn't also use the Acid transport controls to stop and start playback of the two sync'ed applications. That's a shame, but it's not a deal breaker, especially as Rewire VST only costs around £20.

I did have difficulties with one 32‑bit plug‑in in this process: Melodyne Editor. In one sense, I wasn't too surprised, because although Melodyne is one of my favourite pieces of audio software, I'd already struggled with it on my 32‑bit OS. I'd pretty much accepted that the rather unpredictable performance was due to some software/driver conflict specific to my system. However, Celemony had announced that a 64‑bit version was 'coming soon' and, two days before I actually starting writing this column, v1.2 of Melodyne Editor, which includes 64‑bit support, became available. I've only had time for some brief experiments, but so far the performance has been flawless: I am a man with a smile!

Bearing in mind some of the problems I'd heard about from other users concerning the transition from 32-bit to 64‑bit operation — mostly seeming to focus on certain combinations of plug‑ins — I started my own experiments with some trepidation. While I wouldn't suggest that my fairly painless experience will be shared by everyone, I am at least encouraged by how smooth, albeit time‑consuming, the process turned out to be. I'm glad I didn't take the jump six months ago, but I'm equally glad that I now have. You should make the change cautiously, check forums for other users reporting difficulties concerning your own key plug‑ins, and leave yourself a 32‑bit bolt‑hole if things don't pan out but, personally, I think the 64‑bit environment is now mature enough to deliver on its potential.