Use Melodyne Essential, included in Sonar X3 Studio and Producer, to turn your audio into MIDI.

One of the big new features in Sonar X3 (both the Studio and Producer versions) is the inclusion of Celemony's Melodyne Essential. Unlike the full version, Melodyne Essential works only with monophonic tracks — but that's certainly enough for vocals, unless you're a Tuvan throat singer.

So what happened to V-Vocal, which was Roland's answer to pitch correction and based on Variphrase technology? Although it's no longer included with Sonar X3, if you have a previous Sonar installation on your hard drive that included V-Vocal, it will still be available in X3 (as well as the Sonar version of R-Mix, which is also no longer bundled with X3). If you uninstalled your previous Sonar versions when you installed X3 see the December 2013 issue (/sos/dec13/articles/sonar-workshop-1213.htm) for information on how to install V-Vocal for use with X3. Personally, I rather liked V-Vocal, but Melodyne has a very natural sound quality and is quite easy to use. However, it also boasts very good audio-to-MIDI conversion. In addition to the limitation concerning monophonic audio, Melodyne Essential can't translate slides into pitch-bend data, but you can always overdub pitch bend, and if you're one of the lucky guitar players whose guitar has hexaphonic outputs, polyphonic MIDI guitar is possible as well.

A great application for audio-to-MIDI conversion is bass, because this makes it easy to double a bass line with synth bass, or call up a different bass sound entirely. For example, I'm a big fan of the Scarbee Rickenbacker bass library for Native Instruments' Kontakt, so with Melodyne any bass part I play is eligible to be a Scarbee Rickenbacker bass. Here's the procedure: 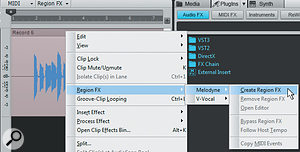 Selecting Region FX is somewhat like the process of creating a V-Vocal clip, although ARA allows for more extensive communication between Melodyne and the audio within the selected region.

1. Record your bass track into a standard audio track. Play cleanly, but note that Melodyne is more forgiving than you might expect if you've worked with previous audio-to-MIDI converters.

2. Melodyne doesn't seem to be too picky about level variations, but I usually normalise a track to around -3dB (Process / Apply Effect / Normalize) so that Melodyne doesn't have to work too hard to detect the notes.

3. Right-click in the audio clip and choose Region FX / Melodyne / Create Region FX. (Note that if you still have V-Vocal installed, this menu is also where you create a V-Vocal clip.) Melodyne will think about the clip for a second or two, then place a 'Melodynised' version for editing in the Dock.

4. You can edit the Melodyne clip (to quantise it, for example) before converting it to MIDI, or edit the MIDI data itself after conversion. However, Melodyne's editing is pretty useful because it not only lets you quantise, but you can also specify the quantisation strength. As you apply various amounts, you can see the note timings change. Select the notes you want to quantise, click on Quantize Time, choose the quantisation value, then select the desired amount of 'intensity' (ie. quantisation strength). Click OK. 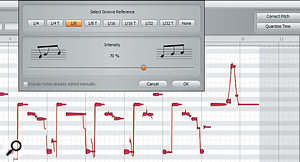 Quantising the timing of notes is simple, and there's visual feedback so you can see how the quantisation intensity affects the notes.

5. Insert your virtual instrument of choice.

6. Drag the audio clip (which will include <Melodyne> in the clip name) into the virtual instrument's MIDI track. Upon releasing the mouse button, the clip will turn into MIDI notes. It's really quite amazing.

7. However, it's a little less amazing when you realise Melodyne didn't know what to do with that loud string squeak or ghost note you hit — so it tried to turn them into MIDI data. Now's the time to clean up the part in the MIDI editor, and then you're done.

The audio has been dragged into Kontakt's associated MIDI track, and the MIDI notes follow the recorded audio.

Converting a voice recording to MIDI is a little more involved because your vocal chords don't have frets, so the pitch is likely to be less exact. In this situation, it's usually easiest to fix any pitch issues in Melodyne (after all, that's what it was designed to do!) before converting the audio.

As in the fourth step above, you want to quantise the time as you did for the bass, but you'll also want to correct pitch. To do this, with the same notes selected (select them if they're deselected), click the Correct Pitch button. Set the Correct Pitch Center and Correct Pitch Drift sliders all the way right to 100 percent, then click on OK.

Audition the Melodyne clip and, if necessary, tweak the vocal further. Drag the audio track into your MIDI track, and the audio will be converted to MIDI.

What About MIDI Guitar?

The inability to handle bends limits expressiveness considerably, but if you play cleanly and follow the same basic procedure for voice (although you probably won't have to correct pitch) you can lay down some tasty single-note lines, as well as do bass lines if you're a guitarist — play the bass part on guitar, convert it to a Melodyne Region FX clip, then after converting the clip to MIDI, drop it down an octave and drive a virtual instrument.

However, I was very curious to see how this would work with a hex pickup. I have a Gibson FBX, which has hexaphonic outputs available through its dedicated computer interface. Furthermore, of all the hex guitars I've tested, it has the greatest degree of separation among strings. This helps considerably in terms of post-recording cleanup.

I recorded the six tracks, then selected them all and chose Region FX / Melodyne / Create Region FX. This was a mistake. For whatever reason, batch processing the six files was not a good idea, as the MIDI data was garbled for the various tracks. It seems Melodyne is happiest when you create a Region FX track one track at a time. 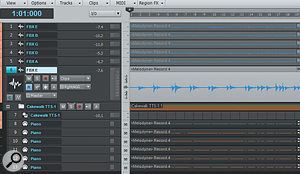 If you have a guitar fitted with a hexaphonic pickup, Melodyne provides an alternate way to create polyphonic MIDI guitar parts within Sonar.

For a test, I fed the MIDI tracks into the TTS1 soft synth and it all worked surprisingly well. Eventually, I collapsed the MIDI tracks together to feed a single piano instrument. Aside from a few notes of crosstalk on one track and a little editing for duration on the highest strings (for some reason, sustained notes on these strings tended to break up into two or three notes), the results worked very well — and having a piano play block chords with guitar voicings was definitely interesting. I even tried some strumming and that worked reasonably well. Remember, it's not perfect and you do have to tidy up the data, but no more so than most other MIDI guitar technology.

Audio-to-MIDI has other possibilities, but this should help get you started, and it's definitely a useful addition to round out the X3 feature set.

Long-time Melodyne users may remember when it was essentially a stand-alone application, and you had to transfer the audio you wanted to process into Melodyne so that Melodyne could analyse the pitch, tempo, and other audio characteristics. This allowed it to do the correct processing, although the analysed file had to be linked to your DAW so it could play back in sync. You may also remember that Melodyne was not exactly a paragon of stability, but that has improved over the years.

Audio Random Access, or ARA, is a big step forward for Melodyne, and was developed in conjunction with PreSonus. ARA is a protocol for exchanging information about an audio file between the DAW and Melodyne such as tempo, pitch, rhythm, and more. So far, only Sonar and Studio One Pro include ARA integration, but other manufacturers are certain to follow.

ARA is not a new kind of plug-in protocol like VST or AU, rather an optional extension that allows Melodyne to avoid the transfer and analysis process so it can open files directly. However, that's not the only advantage. If a file length changes, Melodyne deals with that directly, and no additional transfer is required. Melodyne can also follow tempo and key changes, and from the DAW's perspective, it can now access Melodyne for simplified time stretching and tempo detection. ARA is also what allows you to drag 'Melodyned' audio into a MIDI track and have it turn into MIDI.