Save time and effort with these power-user techniques for Sonar.

Despite logging untold hours with Sonar, occasionally while perusing the Sonar forums someone will describe a trick that makes me think "Wow, that's extremely cool!” So I started a thread there asking users for their favourite underrated features or techniques, and the responses were too good not to share. You can read the original thread at http://forum.cakewalk.com/Whats-Your-Favorite-Underrated-Sonar-Feature-or-Technique-m3044965.aspx.

Consider creating a 'Vocal Mic In' template channel that routes to a bus already containing a basic low-cut EQ, PC2A compressor and some light reverb, with the track armed for recording as soon as it opens. Saving a track template with the output set to a bus recreates that bus when you insert the template in a new project, but as you add more vocal tracks, the bus isn't duplicated — Sonar is smart enough to realise it already has that bus. So when laying down multiple vocal tracks, two clicks gets each new track up and ready to record with appropriate processing. It might not be the exact same processing you'd use in a final mix, but handy for getting a rough idea of how a track will sound in the final production. 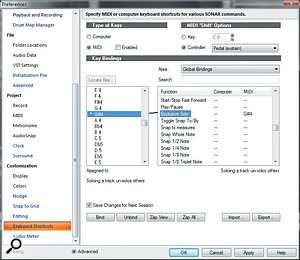 Here, a keyboard's G#4 key is being bound to Sonar's Exclusive Solo function.

Another useful trick is to have a plug-in default to a specific preset when you bring it into a project:

1. Insert the plug-in and set it up as desired.

2. Save your default settings as a preset from the effects window's top toolbar, by double-clicking in the preset name field, typing in a name like 'Default Settings, then clicking Save.

5. In the layout's plug-in tree on the right, find the plug-in from step 1.

7. Right-click on the plug-in name and choose Properties.

8. In the properties dialogue choose 'Default Settings' from the Default Preset drop-down menu.

9. Click OK, then save the plug-in menu layout you selected in step 4. The next time you insert the plug-in, it will open with the default settings.

Everything you can bind to your QWERTY keyboard from the Preferences / Customization / Keyboard Shortcuts menu, you can also bind to your MIDI keyboard. Simply transmit a MIDI CC that tells Sonar to interpret the incoming MIDI notes as shortcuts (a footswitch works well for this), and every MIDI keyboard key is now a potential shortcut. Even one- or two-octave keyboards with mini-keys can make great remotes, so you can focus on playing music, not paying attention to the monitor/QWERTY keyboard combo.

Automation For The People

Creating nodes at either end of a selected region on every track can be very useful if you record lots of songs in a row and want to isolate fader automation from song to song, or from section to section within a single song. With this technique, you won't accidentally lift the volume of, for example, the bass in a previous song while you raise it in the current song:

1. Select all tracks with Ctrl+A.

2. Ctrl-click the Edit filter for any track, then select an envelope. This will choose the same envelope for all the tracks.

3. Click-drag in the time ruler at the top to highlight a region.

4. Right-click on one of the selected envelopes in any of the tracks, then choose 'Add nodes at selection.'

One further way to save time when using automation is to create your own library of MIDI control clips. The draw tool is great not just because you can create automation waveforms (eg. tremolo or sample-and-hold filter), but because it's so easy to vary the height and phase. Furthermore, if you output the Draw Tool automation to another MIDI track, it will be converted to a MIDI CC message. Send the first track's output to a virtual MIDI cable like LoopBe or loopMIDI, and the other end of the virtual cable to the second track's input. From there, it's easy to create a library of drag-and-drop modulation effects (virtual LFOs) that work like 'groove clips' of vibrato, tremolo, pans, sweeps, sample-and-hold, and the like. You can also vary rates, depths, fades, and combine waveforms. Of course, these will work across any synth, effect, and most track controls. 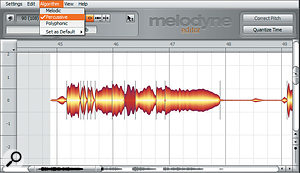 Melodyne's Percussive algorithm lets you balance vocal levels with instant visual feedback.Vocal levels are a prime target for automation, and although you can do this by splitting vocal tracks up into a bunch of clips and changing the gain of individual clips, Melodyne's Percussion algorithm lets you see the vocal 'blobs' more clearly. Using Melodyne's volume tool you can use this feature to level vocal tracks, but with the advantage that the waveforms are resized to represent their new level — unlike clip waveforms, which stay the same size until you bounce them.

For sound design, sometimes you might not be sure which parameter would be the best match for a particular automation envelope. With instruments that support MIDI Learn (like Dimension Pro and Rapture), create an automation envelope for a seldom-used controller, start the sequence, then pick a control you might want to automate. Right-click on the control and choose MIDI Learn; Sonar will assign the existing automation to the control. You can then use Forget and Learn to audition the automation curve's effect on any control accessible from the instrument's interface, without having to re-assign the automation data to a different controller.

Battle Of The Bands

The Multiband Compressor can do useful EQ tricks if you set the ratio controls to 1:1 so that there's no compression. For example, you can treat the multiband compressor as a five-band graphic EQ where each band has a variable instead of a fixed width, and raise or lower the level of each band. It's a whole different type of EQ, and in case a band needs compression, you still have that option.

You can also use the multiband compressor without compression as a crossover for multiband processing. Because the Sonitus Multiband Compressor lets you solo individual bands, you could (for example) create four bands in one instance, copy that into four buses, and solo a different band in each bus. Now you can send a signal to those buses, and process each frequency band independently. In addition to multiband distortion, for EDM you can insert delays with different delay times in the different bands.

You can also use any multiband compressor as a de-esser: just tune the high-frequency band to where the problem is and compress, or use the low band similarly to attenuate plosives. The best part about using a multiband compressor for plosives is that it leaves the low frequencies untouched until a plosive comes along, then flattens it with compression so you don't need to EQ the track. This also works well for wind noise suppression.

Finally, in the Track View under View / Display, you can choose to have the vertical grid lines go behind clips or in front of them. When the grid lines are in front of the clips, it's really easy to see which notes, hits or chords are on the beat, and which ones are off (and by how much). This feature is particularly helpful if you split clips and re-arrange them to hit the grid instead of invoking AudioSnap or quantise.

There's A Map For That

If you create drum maps to do keyswitching among articulations in sample libraries like Kontakt and the Eastwest Play, you can enter descriptive articulation names that appear along the left-hand side of the Piano Roll View, instead of the usual drum note names or numbers.

The 'mklink' DOS command has redirected Rapture's Multisamples directory to a folder on the G: drive. 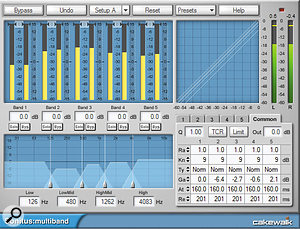 The Sonitus Multiband Compression has been set to a compression ratio of 1.0, so that it can be used as a graphic EQ, with variable bandwidth for each band.

After you hit return, you should see confirmation that a suitable junction (type of link) was created. Rapture still looks in C:\ for its data because the registry hasn't changed, but picks up the data from E:\ because it follows the link.

Arpeggiators can be stiff and repetitive, so the ability to bounce arpeggiator patterns to editable MIDI notes is great. Simply right-click on a MIDI clip you recorded into a track, make sure the arpeggiator is active, choose Bounce to Clip(s), and the additional arpeggiated notes will appear within the clip. That in itself is cool, but the 'hidden gem' here is the potential to customise arpeggiator sequences.