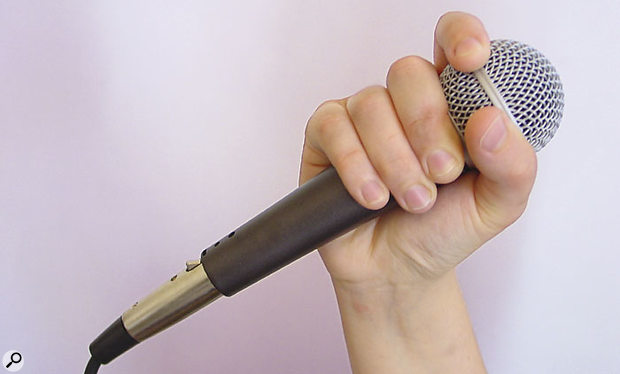 Find out how to mic up a typical live band — and also discover when it's best to DI instead.

If you play live regularly, or plan to, or if you ever engineer for live acts, you should be aware that many different miking and DI'ing scenarios can occur on stage. As an example, for small gigs you may get away with miking up only the vocals and perhaps acoustic instruments such as guitars, but for medium to large venues, you really need to mic up the drums and backline as well. This article aims to examine effective ways of tackling the common situations you might come across. 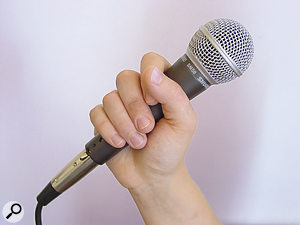 If the singer holds the mic incorrectly (in the header photo), the tendency to feedback can be increased. This photo shows the best way to hold the mic.

To avoid excessive spill, try to position the vocal mic so that there are no loud amplifiers or drum kits directly in its path, and so that any stage monitors in its vicinity are correctly placed to capitalise on the mic's 'dead zone', where it picks up sound much less efficiently (in the case of a mic with a cardioid pickup pattern, towards the rear of the microphone). 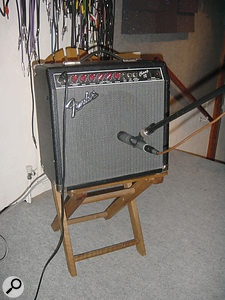 Miking up a guitar amp. The mic should be a dynamic model placed close to the grille cloth. For a less bright sound, point the mic further towards the edge of the speaker cone.In the studio, you can spend as long as you want experimenting with mic positions, but at a gig you normally have to choose a mic position fairly quickly and sort out any tonal issues on the mixing desk using EQ.

If the cabinet has more than one speaker in it, see if any one speaker sounds better than the others, but only if you find you have the time. If you work with the same amp on a regular basis, make a note of the best mic position. 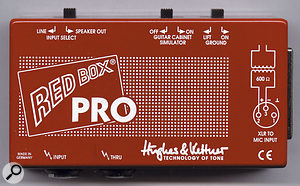 DI boxes such as this one include speaker simulation circuitry, which will make your electric guitar sound a lot better.DI'ing in this way may be a good option where the guitar amplifier is physically small and produces a thin or nasal sound, as the DI feed will make it sound as though a larger cabinet has been used. Speaker-simulator filters are particularly important for overdriven guitar sounds, which can be harsh and raspy when DI'd with no filtering.

If the amp has two speaker jacks (wired in parallel), and only one has a speaker plugged in, you could simply plug the DI device into the spare speaker jack. Although the impedance of your DI or speaker-sim box can effectively be ignored in calculating the total load, watch out for amps where self-switching jacks are used for the speaker outputs; plugging in a second jack will sometimes activate a different tap on the output transformer. With combos, also make sure that plugging anything into the extension speaker jack doesn't disconnect the internal speaker! Most of the classic Fender valve amps, however, and their many design derivatives, have a simple parallel connection for their extension speaker sockets, actually forcing the amp to run into a mismatched load when used with both internal and external speakers, but creating the ideal connection for a speaker-sim DI.

Choosing the right mic for the job is a key part of achieving the sound you want. This Sennheiser MD421, for example, is well suited to miking bass guitar amps because of its good low-frequency response.If no other satisfactory option is available, you can solder or clip a spare jack socket across the speaker terminals in a typical open-backed combo. Having said that, many simulator/DI boxes have a speaker Thru feed, so all you need do is insert the DI box between the amplifier output and the speaker, then use the balanced DI output to feed the PA mixer. Where a ground-lift switch is fitted to the box, it may be useful to use it, to reduce ground-loop hum.

Again, listen to each speaker in turn and pick the best-sounding one, specifically avoiding any that rattle. As with guitar-amp miking, moving the microphone off-axis will produce a more mellow tone.

Because bass speakers can sound less than optimal when being driven very hard, taking a DI feed is often a safer bet. You don't have to use speaker emulation in this case, though it can help to avoid fret noise and finger squeaks. Many bass amps now have a balanced DI feed; if yours does you can plug it into your stage box. Where there is no direct output, a DI box must be used.

Drum miking can be a problem, not least because many drummers don't spend enough time learning to tune their kits properly. A good drum sound starts with a decent-sounding drum kit. There's little you can do about it if the kit you have to work with doesn't sound as good as it could, but at least drums are generally so loud that you never need to worry about feedback.

* Getting The Balance Right: Some studio engineers base their drum sound on the overheads and then use the close mics to achieve balance, but live engineers are more likely to use the close-miked sound as the basis of the kit mix, then add the overheads to bring out the cymbals. A low-end EQ cut on overhead mics can clarify a mix by reducing the level of LF spill.

In my experience, the biggest problem when miking drum kits is that the lower tom heads ring excessively when any other drum is hit, which tends to cloud the overall kit sound. This can be improved upon by using gates on the tom and kick mics, but you have to be very careful, when setting them up, not to exclude intended quiet drum hits.

* Percussion: Congas and similar hand percussion instruments are best miked in stereo from above, 30-60cm away, again depending on the instrument and the spill situation. A small-diaphragm capacitor mic will produce good results on most types of percussion. Suitable models are now no more expensive than decent dynamic mics.

It always helps to set a vocal level that gives you five or six decibels of headroom before feedback, then balance the rest of the band to the vocals. If you try to do it the other way round, you may find that the vocals get totally swamped. 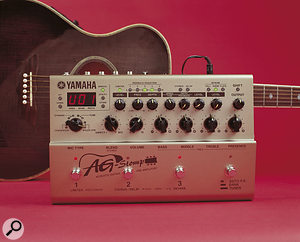 A processor specifically designed for acoustic guitars, such as this Yamaha AG Stomp, goes a long way towards improving the sound of guitars with conventional piezo pickups.Except for all-acoustic gigs, miking acoustic guitar is usually disastrous, because if you get the mic close enough to keep spill to an acceptable level, the player's movements cause a significant change in tone — and you probably won't capture an accurate sound anyway. It's better to DI, though the quality of the end result depends very much on the quality of the pickup system fitted to the guitar.

Most acoustic pickup systems rely on piezo-electric transducers under the bridge saddle. These feed an onboard preamp with a balanced output and an unbalanced output, so that you can feed it both to an on-stage acoustic guitar amp and the PA mixer. These pickups can sound hard and scratchy when compared with the natural guitar sound, so you may need to apply fairly radical EQ to get them sounding good. A number of specific acoustic-guitar effects pedals are available that provide suitable EQ treatments and compression, as well as effects such as reverb and delay. These can significantly improve the sound of a basic piezo pickup system.

The better pickup systems combine either a piezo or a magnetic pickup system with a miniature microphone mounted inside the sound-hole of the guitar. There's usually a control to blend the contributions of the pickup and the microphone. Judging by the ones of this type that I've worked with, far less 'salvage' EQ is needed to get a good sound out of them. Incidentally, where EQ is needed with acoustic guitars, it's usually low mid-range cut (150-250Hz) to tame the 'boxy' element of the sound.