Using Plug-ins In A Surround Mix 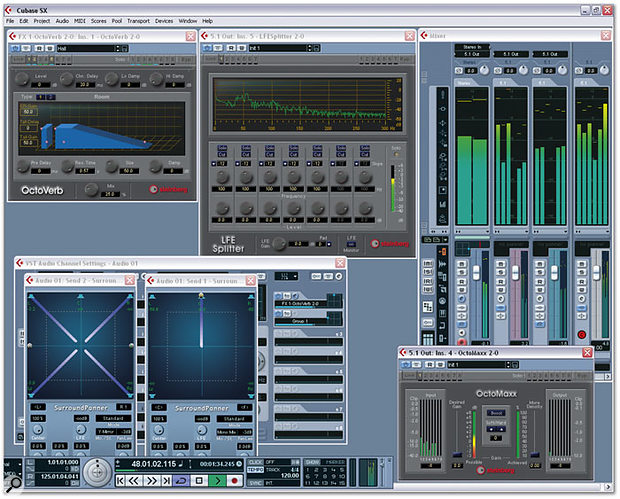 Continuing our exploration of surround sound in Cubase SX 2, this month we turn to using stereo and multi-channel

plug-ins in a surround mix.

Mixing in surround is quite a novelty to many musicians, but once one gets over the initial interest of being able to pan sources within a surround sound stage, one's attention will probably turn back to practicalities such as how to mix and process mixes with plug-in effects. The VST plug-in format has supported multiple channels from version 2.0 of the specification, because a plug-in format capable of supporting more than two channels, to implement surround audio processes, was required for the earliest versions of Nuendo. However, compared to the number of VST plug-ins available, the number of surround-capable VST plug-ins is still relatively small.

All Aboard The Multi-channel Buss

Multi-channel plug-ins can be used on any configuration of audio channel (stereo or multi-channel), although it obviously makes sense to use them on multi-channel audio channels. As discussed last month, the VST 2.3 mixer architecture in SX 2 supports up to six streams in all the audio paths, and this extends to FX channels, meaning that you can have a six-channel send from an audio-based channel to a 5.1 FX or Group channel.

If you're sending from a 5.1 audio-based channel, you won't have any control over how the signal is sent to the destination channel — the level of the send will simply set the overall level for the six channels across the send buss. However, if you're sending to a 5.1 FX or Group channel from a mono or stereo audio-based channel, switching the Send Display mode to 'Routing', in that channel's Settings window, will display a surround panner for each send. This makes it possible to pan the signal before it's sent along the send buss, in exactly the same way as you would pan an audio-based channel being sent to a 5.1 output buss. In fact, the functionality of the surround panner on the send buss is identical to the surround panner on a channel's controls, meaning that you can double-click it to open a more feature-rich panning editor — as described in last month's column.

So what of the multi-channel plug-ins you might want to use on audio-based channels? Possibly the most important effect to have if you're doing a surround mix is a true surround reverb, and here you have a few choices, such as Steinberg's own OctoVerb, included in the Nuendo Surround Edition. Although this bundle was originally intended for Nuendo, it seems to work fine in Cubase SX, and while the Octo prefix refers to the fact that the plug-in can work with up to eight channels, OctoVerb works just fine with the six-channel-wide architecture available in SX: Nuendo users need to do 5.1 mixes, after all! Steinberg also distribute TC Electronic's (www.tcelectronic.com) Surroundverb, which is available for both native and PowerCore platforms, and Voxengo (www.voxengo.com) recently released the eight-channel Pristine Space convolution processor for Windows users — a demo version can be downloaded from the company's web site.

Steinberg's Surround Edition bundle also includes six other plug-ins: OctoComp, an eight-channel single-band compressor; OctoQ, a seven-band surround equaliser; OctoMaxx, an eight-channel version of Steinberg's Loudness Maximizer plug-in; and LFE Combiner and Splitter, two plug-ins for working with the LFE channel. Combiner allows you to create an LFE signal from the other speaker channels, while Splitter does the opposite and allows you to mix some of the LFE channel into the other channels.

The surround plug-ins I would personally like to be able to use on the VST platform are those included in Waves' surround (360 Toolkit) bundle, which are only available for TDM systems at the time of writing. This bundle comprises nine plug-ins, including tools for surround management, a panner, a compressor, a reverb, and multi-channel versions of the popular L2 and IDR plug-ins.

This month I encountered possibly the most annoying Cubase (and Nuendo) bug imaginable. The problem is that if you're copying MIDI Parts to or from a section of the song that contains Tempo Events, the start time of all but the first Part you have selected will become distorted as you drag the Parts to a new area of the Event Display. For example, if you have four two-bar Parts between bars one and eight, and you also have a tempo ramp over the same range, when you copy these four Parts to a new section of the Project, they will become spread out, so you have to manually drag the Parts back to the correct, intended location.

The reason for this timing error is fairly obvious, and has been confirmed by Steinberg. It is that since Cubase (like Nuendo) is internally based on a linear time base, rather than a musical (bars and beats) time base, only relative time positions are kept when dragging parts, instead of relative musical positions. This works great for Audio Parts, of course, where the length doesn't change regardless of the tempo; but for MIDI Parts, which can become longer or shorter in terms of time, depending on the tempo, the start times need to be recalculated to fall on musically correct positions.

Steinberg are aware of this problem and the developers are currently working on a new maintenance release to fix it and other issues. On the plus side, though, there is a workaround, which is to temporarily disable the Tempo Track when dragging MIDI Parts around the Project window, and enable it again once you've finished. Not exactly elegant, but it works.

Stereo Plugs In A Surround World

The default routing for three stereo insert effects on a 5.1 channel (top), where only the left and right channels are processed, and the adjusted routing (bottom), where each effect processes one of the three stereo pairs of the 5.1 Audio channel.Since the selection of multi-channel VST plug-ins is currently limited, the workaround is, as in SX 1, chaining three stereo plug-ins within a single surround audio channel, so that all six streams in a 5.1 signal are processed. This isn't as bad a solution as you might think: it's mostly only plug-ins that deal with the surround sound stage that need to be able to process multiple channels in one algorithm, such as a reverb. For the most part, a 'surround' EQ or dynamics processor is just multiple channels of a given algorithm, where the advantage is being able to link settings between channels, rather than having to copy and paste them between multiple instances of a single- or two-channel plug-in.

Say we wanted to put the Waves L2 Ultramaximiser across all six channels of the 5.1 output buss. To do this, open the Channel Settings window for the output buss, switch the Insert Display Mode to Routing and notice how the insert view changes to show the signal path through the insert slots. Clicking in the darker region, to the left of a slot, allows you to choose a plug-in as normal; so in this case, I'm going to set the first three slots to be the L2. Each L2 plug-in is stereo, so we need three instances to process six channels.

After you've added the L2 s, the routing diagram shows that only the first two channels are processed, while the other four pass through the plug-in unchanged. Notice that the input and output points to and from the plug-in are illustrated by nodes. What we need to do is set these so that the first plug-in processes channels one and two, the second plug-in processes three and four, and so on. For this, we use Cubase 's Routing Editor: open this now for the second plug-in by double-clicking in the lighter part of the slot, to the right, where the routing is actually shown.

The Routing Editor is fairly straightforward. Upper nodes select which channels go into a plug-in, while lower nodes select which channels the output of a-plug-in are routed to. In this way it's possible for a plug-in to process the left and right channels of the incoming signal, and output the result to the left and right surround channels. The input nodes can be set with the upper set of left and right buttons, while the output nodes can be set with the lower set. You'll notice that, by default, the upper and lower modes are linked (with the Link toggle active) to prevent you from using more esoteric routing patterns by mistake. 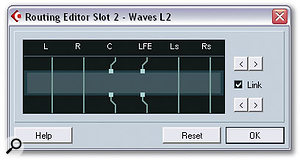 The SX Routing Editor.For this example, click twice on one of the right buttons so that the routing nodes move to the Centre and LFE channels. Click OK and repeat the process so that the third plug-in processes the left and right surround channels, and voila! Six-channel processing with three stereo plug-ins!

For reference, it's worth noting that the Routing Editor doesn't have a 'cancel' button, so the routing becomes active immediately without you having to click the 'OK' button first. The reset button is used instead to change the routing back to the default setting. Additionally, you can prevent a channel not being processed by a plug-in from passing through by clicking the pass-through link to break the flow. This effectively works as a channel mute, and could be useful if, for example, you wanted to remove the LFE or Centre channel from the overall 5.1 channel.

You'll notice in the main text that I always refer to audio-based channels, rather than just Audio channels, since there are channels on the SX mixer that produce an audio signal besides the Audio channels that play back audio files. Examples of other audio-based channels would include FX and VST Instrument channels, and these channel types can have more than just one or two-channel output configurations. This means, for example, that it's possible for a VST Instrument to have a multi-channel output in the space of a single channel on the SX mixer. Steinberg's VST sampler, Halion 2, has such a 5.1 output, where you can create envelopes that pan the output in surround, and Hypersonic 's outputs can also be configured to be quad outputs, rather than stereo or mono.