Take it slow with Logic Pro, as you get to grips with this vinyl effect...

Though over-used in some musical circles, the effect of a vinyl record or analogue tape being slowed to a stop and then starting up again can still be a useful musical device to add interest to a track. Logic includes tools for emulating this effect very easily, but before applying them, a little bit of physics helps us to understand what kind of curve is required for the slow-down part of the effect.

The energy contained in a rotating flywheel, which is what a record deck is, when it comes down to it, is proportional to the square of its rotational speed. In practical terms, this means that if you put your hand on it to apply friction, the rate at which the turntable slows increases as time passes. In other words, the slower it gets, the less effort it takes to slow it even more, so the slow-down curve gets steeper towards the end, rather than being a straight ramp. In Logic, however, you can change the shape of the curve according to what sounds good to you: you don't have to stick to the laws of physics if you don't want to. 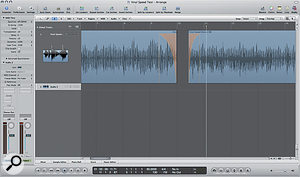 Hidden behind Logic's Fade facilities are all the tools you need to create a convincing vinyl slow-down effect in the middle of your track.

So how do you apply this knowledge in a DAW? In Logic Pro 9, the speed-change tools are hidden away behind the fade-in and fade-out facilities:

For the fade-in part of the following section:

It's unlikely that the effect will be quite as you want it just yet, so use the Fade tool to drag the middle of the curve upwards, producing an exponential curve that gets steeper towards the end. You can then adjust the length of the fade ramp, using the same tool, to get just the effect you want. 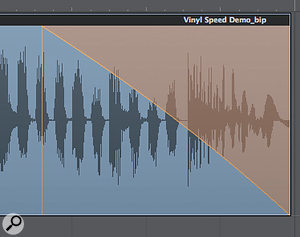 You can now make your slowed-down and sped-up audio convincing by altering the speed at which the effect works. Grabbing the middle of the curve and dragging it upwards starts to create the effect you need. 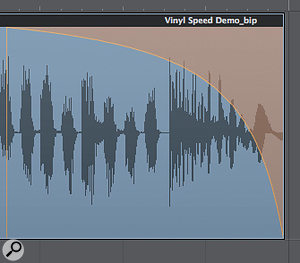 For the speed-up at the start of the next section, adjust the curve shape so that the initial speed-up is fast, levelling out towards the top of the curve. Again, this mimics the way a real turntable takes more energy to speed it up as the rotational speed increases. Tweak the curve length until the effect sounds natural and you're done. Just bounce the regions 'in place' to capture your effects as finished audio once you're happy with the settings.

Although the above settings get close to the sound of the real thing, the tail-end of the slow-down can sometimes sound a little too abrupt. Having the last sound grind slowly into silence can be more dramatic, and there are a couple of ways to achieve this. The first is to do the slow-down in two stages, bouncing the file between each stage, which is what I did for the audio example that accompanies this article. The first stage was to slow down only the last beat or two of the section, using the opposite curve shape so that it flattens out towards the end. After bouncing this to a new file, a longer slow-down was applied using the original 'steeper towards the end' curve shape. By taking a two-stage approach like this, you can depart from the true 'laws of physics' scenario to have the tail-end of the slow-down stretched out longer than would occur in real life — call it poetic licence.

There's another alternative, and that's to use Logic's Region Stretch facility to extend the length of the last beat or two before applying the speed change. This entails first separating the beat to be stretched. It then has to be glued back onto the earlier part of the region after being extended. In my experience, the dual slow-down sounds more natural, but natural isn't always what you're after!

And that's it: an easy effect to create, but one that should be used wisely.

To listen to this technique in action, go to /sos/jan12/articles/logicmedia.htm.