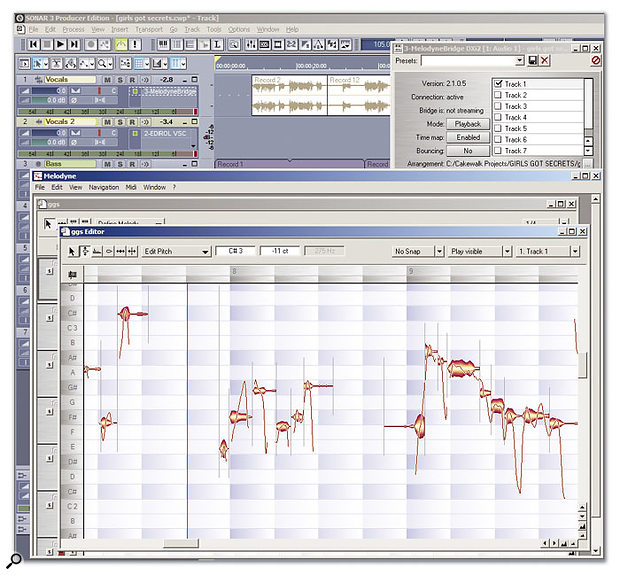 It's not quite a plug-in and not quite an instrument, but MelodyneBridge provides a link between tracks in Sonar and Melodyne.

We investigate a new DXi option that makes vocal manipulation as easy as editing MIDI data. Plus the usual haul of Sonar power tips...

It's a little ironic: due to the initial paucity of DXi devices, Sonar users flocked to wrappers that would allow VST and VSTi plug-ins to work within Sonar: Cakewalk even acquired the technology for VST-DX Adapter and built it into the program. And now that the whole VST wrapping process is working just about perfectly, the DXi floodgates are opening up as more and more companies adapt their plug-ins to this format. Let's look at a couple of the more interesting developments.

Amongst the apps that have been optimised for Sonar, Celemony's Melodyne is one of the most important. For those not familiar with Melodyne, it's a program that gives monophonic audio data the same flexibility as MIDI data. You can change pitch and rhythm, cut/paste/copy notes, alter formants, and much more, as well as using MIDI to change note pitches, add pitch-bend, and the like.

Of course, other programs let you do timestretching and pitch-shifting, but Melodyne 's speciality is a detection process that causes audio to appear very much like MIDI notes in a piano roll editor, which you manipulate in the same way. The bottom line is that it's a brilliant program, particularly for working with vocals.

Melodyne started life as a Mac multitrack program that sort of lived off in its own world and didn't integrate well with other applications. Over the years, that has changed, and Version 2.1 includes two Sonar-orientated integration tools: ReWire and MelodyneBridge. ReWire works as expected, with Melodyne essentially acting like a stand-alone multitrack application that streams audio into Sonar. MelodyneBridge creates a link between Melodyne and Sonar so that Melodyne acts more like a DXi instrument or processor.

The overall feel is a bit of a kludge, but it works. You open Sonar, select the track you want to 'melodize' then open MelodyneBridge in the track's FX field as a DXi instrument (you can also use the Insert / DXi synth option). Finally, you open the Melodyne application itself.

If you then set MelodyneBridge to 'Record', and start playback within Sonar, material in the track transfers over to Melodyne. After using Melodyne 's Detect Melody function, you're ready to mess with the audio. Note that you don't have to record the entire track; you can isolate just a few problem measures and record them. On playback, MelodyneBridge will pass through the non-recorded audio, then take over playback when it hits the audio section that was recorded into Melodyne.

It's important to check the FAQs and manual. For example, MelodyneBridge didn't register as a DXi, but an FAQ on the Celemony site (www.celemony.com) tells how to register it manually. There are some other important issues, such as setting Melodyne 's buffer size to a greater size than Sonar 's. One non-issue: the manual recommends turning off multi-processing, but I tried both enabling and disabling multi-processing and Melodyne worked fine both ways.

Incidentally, Melodyne is a deep program — don't expect to master it in an hour, although you can do simple stuff such as fixing note pitches within minutes of being up and running. Overall, Melodyne really adds tremendous capabilities to Sonar, and I'm glad Celemony decided to support the program. 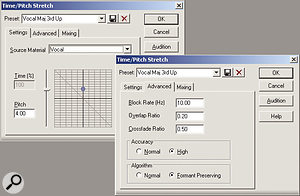 The Time/Pitch Stretch processor works very well with vocals, assuming you set the parameters correctly. There are presets for Vocal Maj Third Up and Vocal Third Up (minor third). This picture shows recommended parameter values for the Settings and Advanced tabs.In the very first Sonar Notes, we mentioned a technique for generating harmony lines using the old Pitch Shifter plug-in (still available on the distribution CD, but not installed by default). Since then, Sonar has added a DSP-based Time/Pitch function, which includes formant preservation so that vocals sound like vocals, not chipmunks, and has more variable parameters for optimising the sound. In view of this fact, let's re-visit the idea of synthesizing vocal harmonies using Sonar:

Not surprisingly, real harmonies from a human singer usually sound better than this synthetic version. But synthesizing harmonies creates a distinctive timbre that may sometimes be desirable; in fact, sometimes you might deliberately choose not to use formant preservation, just to achieve a weirder effect. 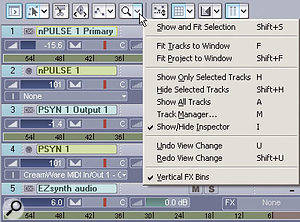 You can make wholesale changes to the Track View with just a few mouse clicks. The View Options button in the toolbar above the Track Pane is the key to instant customisation features that influence how you interact with Sonar 's interface. Here are your options: