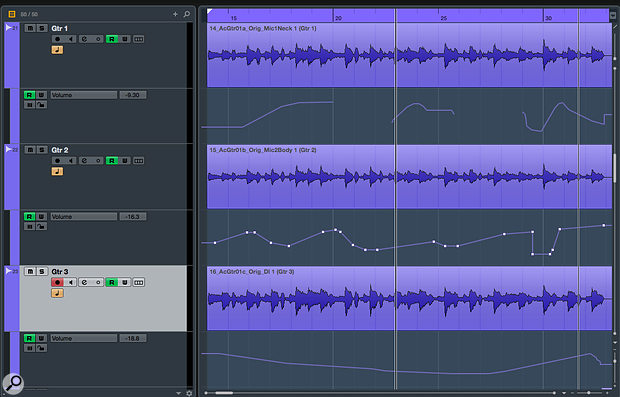 With a comprehensive automation toolset, Cubase Pro lets you fix some things in your mix you probably should have got right beforehand!

While creating a rough mix with a first pass at automation of levels/pan is generally quite a straightforward affair in Cubase, refining that rough ‘n’ ready automation data to take you towards what can be an all–too–illusive ‘finished mix’ typically requires much more skill and effort. Fortunately, Cubase’s automation system boasts a number of tools that can help.

Before considering the various automation editing options, there’s one thing that’s well worth noting: for some parameters (for example, volume/level), automation data can actually be recorded at track level (in Automation Lanes) or at event level (within a specific MIDI or audio event). You can tie yourself in automation knots if you are not careful so, however, you choose to manage your automation data, a consistent approach is a good idea. Personally, I like to stick with just the Automation Lane system, but your own mileage may vary.

The Automation Event Editor allows you to stretch, compress, tilt and expand your automation curves while retaining the original trends within the data. The top panel shows the original data, while below, the same data is shown stretched vertically, tilted to the right edge and tilted to the left edge, respectively.

Mouse In The House

Automation data can be edited via the mouse, a touchscreen or using a suitable external hardware controller. Sometimes a combination of these can be useful. For example, even if you usually prefer to use a knob or fader, the Automation Event Editor provides a series of options for mouse-based editing that would be difficult to achieve in a different way. You can access the Automation Event Editor simply by selecting multiple automation events within an Automation Lane using the standard Object Selection (arrow cursor) tool (the events will be highlighted with a grey background). As you hover the mouse over this selection, four small tool buttons, each offering two different tools (use the Alt/Option key to get at the second one), will appear around its top and right edges. A ninth tool is available if you hover the mouse along the bottom of the highlighted area.

These tools excel when your basic pattern of automation moves is good but they need to be ‘scaled’ in some way (exaggerated, compressed or otherwise manipulated) while preserving the existing trends within the data. The options include tilting the automation data left/right, compressing the data left/right (the left or right side of the selected data is compressed/stretched), scaling or moving all the data vertically and scaling all the selected data vertically either around the relative centre or the absolute centre. The final option, the one available by hovering at the base, allows you to stretch/compress the data horizontally.

This mouse-based Automation Event Editor toolset can save you from having to perform lots of trial–and–error style passes re-writing data that was, essentially, pretty close on your first pass. However, the mouse can also be used to move groups of automation events left/right along the timeline (just select a series of events as above, avoid hovering near the tool buttons, and drag), or for moving individual automation events.

As with replacing a section of an audio or MIDI recording, you can also punch in and punch out to re-record sections of automation data, for which Cubase Pro offers three main ‘modes’: Touch, Auto-latch and Cross-over. You can toggle between the three modes via the automation section (if enabled) within the Toolbar strip, or by opening the Automation Panel (from the Project menu or via the default F6 key command). The key difference between them is in the way the punch-out facility works. Personally, I find the default Touch mode the most useful, so let’s focus on that. 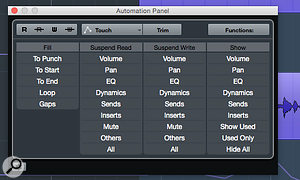 In Cubase Pro, the Automation Panel allows you to select your punch-in/punch-out mode (Touch mode is selected here) and engage the Trim mode, as well as providing a whole range of other automation options.

The Return Time (see the Setting options within the Automation Panel) sets the time after punch out for the automation data to return to the level contained in the previous automation pass. This provides a short ‘ramp’ between the new and existing data to stop any audio glitches occurring as a result of instant steps in the data. Well, that’s the theory... but there is a catch if you happen to be using a standard control surface to create this replacement data. As Cubase has no way of knowing exactly when you’ve ceased using an external fader or knob, there’s a short delay before Cubase decides to punch out — it was about one second on my own test system. If you’re attempting precise edits of your automation, this is far from ideal, of course. However, when creating your replacement automation data by tweaking one of Cubase’s controls via the mouse, punch out is instant; and if you own a touch–sensitive control surface (for example, the Behringer X-Touch or a touchscreen device such as an iPad running the Cubase iC Pro remote control app), punch out is also instant. 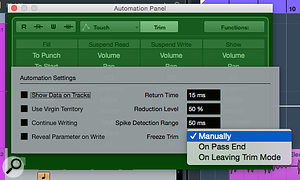 Amongst other things, the Settings pane of the Automation Panel allows you to activate the Virgin Territories facility, and set the Freeze Trim mode.

A fourth option, called Trim, can be used alongside all three of the main automation modes. With Trim active, instead of your automation data being replaced between punch in/punch out, your new data is used to scale/trim the existing automation. In the Automation Lane, you see curves for the existing data, the new data and the resulting sum of these — it’s very similar to the way VCA fader data and track volume automation are displayed for audio tracks.

There are two big advantages to using Trim. First, it allows you just to make subtle shifts up/down to sections of automation data without having to reproduce the overall pattern in the data from scratch. Second, you can record a pass of ‘trimmed’ automation data and, if it isn’t quite what you require, you can easily take another run at it — simply select and delete the trimmed data pass — without any danger of losing your original automation.

Once you are happy that your trimming results in exactly what you need, you can ‘freeze’ the trimmed data to make the result permanent. The Freeze Trim options in the Automation Panel’s Settings pane provide Manual, On Pass End or On Leaving Trim Mode choices for initiating freezing, with the first of these giving you the maximum flexibility.

Cubase Pro 8 added the useful Virgin Territories feature (previously available only in Nuendo) to the automation options. By default, when you open a new Automation Lane for a track, a straight horizontal automation curve already exists (the default value for that parameter), spanning the whole project’s length. In many cases, this will be fine but, in others, it’s less ideal, and some users prefer the visual feedback Virgin Territories provides by only showing automation data in places where they’ve actually written it.

The new Virgin Territories option allows you to see automation data only where you’ve actually written it — the fader/control setting governs what happens in between.

For example, imagine you’ve written some automation at the start of your project and then some further automation data towards the end. In between the two sets of data, you still get an automation curve (by default, the last value of the first set of automation data). If you then wish to experiment with automation moves (with Write disabled) between these two song sections, every time you stop moving the control being used, the automation system will automatically jump back to the existing ‘straight-line’ value; not ideal. However, if you engage the Use Virgin Territory option from the Settings pane of the Automation Panel, when you then write enable a new track for automation, the Automation Lane will initially be blank. If you then add automation data to specific sections of the timeline, the automation curves ‘float’ in those sections, with no straight line created to link them. Yes, the last automation data point is still being used as the parameter value in a blank section but, if you tweak the control while experimenting, its value will no longer shoot back to the previous value once you stop tweaking. This is really useful as you ‘dry run’ automation settings before write enabling the track to record them.

Incidentally, if you wish to use this Virgin Territory mode but have already written data without Virgin Territories engaged, switch the option on and, using the Range Selection tool, highlight the region within an Automation Lane where you want to create a gap and press the backspace key. All the automation data within that range will be removed while data outside it will remain.

The above discussion only scratches the surface of Cubase Pro’s automation feature set and its Automation Panel — we may well return to this topic in another workshop before too long!