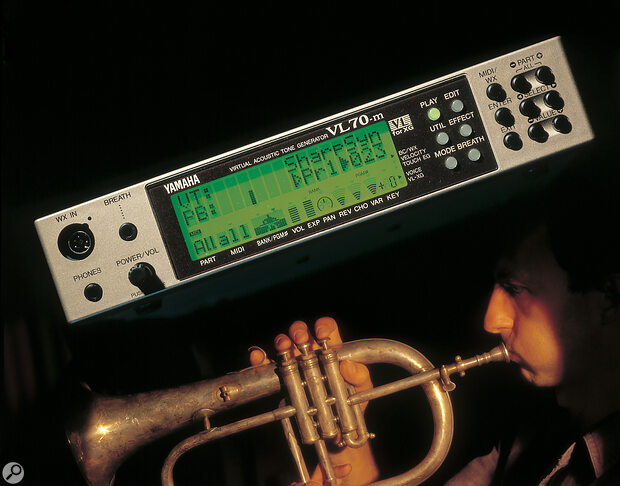 Paul White finds a few ways around the restricted breath‑control facilities of the Yamaha VL70m.

Some instruments you swear by, while others you swear at, but with Yamaha's VL70m it boils down to a bit of each. By combining the VL70's physical modelling with breath control you can create some of the most realistic and musically articulate synthetic wind sounds available at any price, but there's a serious fly in the ointment. For some reason that even Yamaha UK can't figure out, the Japanese designers of the VL70m optimised it for live use, but it never seems to have crossed their minds that anyone would use it with a sequencer. Of course, the VL70m is a pretty regular MIDI module in most respects, so using it with a sequencer is straightforward enough — unless you want to use the breath controller.

The problem is that the breath controller is built into the module itself, and any breath control data is merged with any note data present at the output. If you put the VL70m on your sequencer output with all your other modules, the breath controller data isn't recorded, whereas if you connect your VL70m between your master keyboard and your sequencer input, the breath controller data is recorded, but now there's no way to play the sequence back via the module. Try as you might to get around this problem, the outcome is that you can't have the VL70m connected so that it allows you to both record breath controller data and play back sequences without setting up a MIDI loop — with the usual consequences. Those lateral thinkers with programmable MIDI patchbays that also include selective data filtering can probably dig their way out of this problem, but for the rest of us there are a couple of simple alternatives.

A second, more inexpensive possibility is to use a MIDI switcher to change your VL70m's position in the MIDI chain between recording and playback. Sadly I don't know of anything cheap and cheerful that does the job, but I have worked out the wiring diagram if you want to build your own (see page 230). Essentially, the idea is to place the VL70m between the master keyboard and the sequencer input when recording, then flip a switch to connect it to the MIDI output of the sequencer (or to the end of an existing MIDI chain) when playing back. MIDI connections comprise two signal conductors plus a ground, but the ground can be left connected at all times, so you only need to switch two conductors. Ground is the centre pin on a MIDI DIN socket, and all five sockets on the switcher should have their grounds linked together. 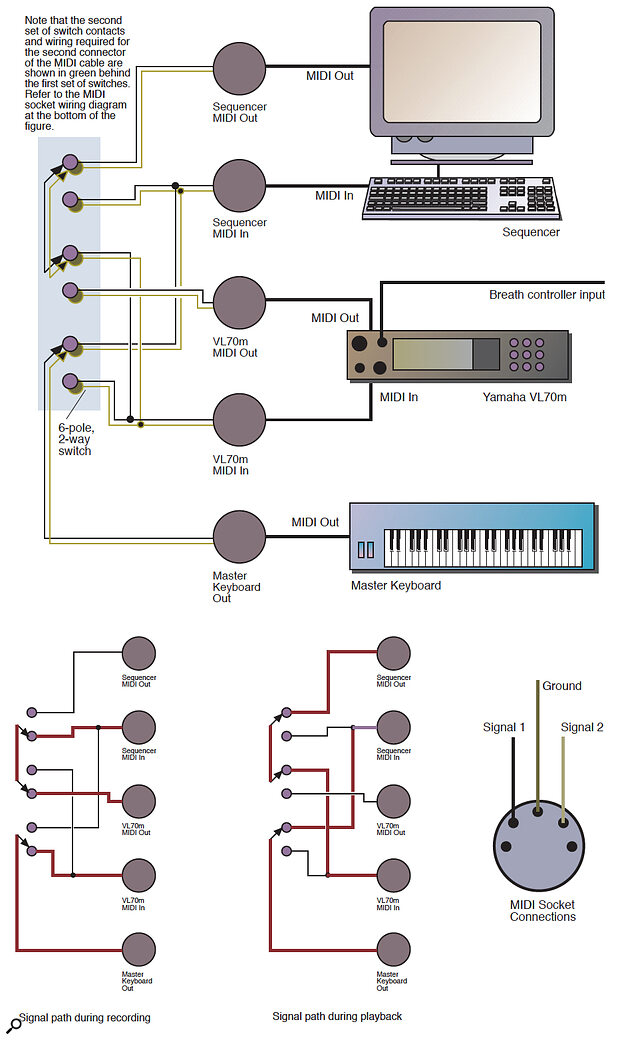 The switch in question may either be a wafer switch or a push‑button, but it needs at least six pairs of changeover contacts to do the job. Numerous suitable switches are available via companies such as RS Components, so I'll leave the actual choice of switch up to you. The two small diagrams at the bottom of Figure 1 show the MIDI signal flow in both the Record and Playback switch positions. The VL70m must be set to the same MIDI channel as your master keyboard so that you can hear it while recording, but as most sequencers automatically re‑channelise MIDI data, this is usually a matter of setting up the keyboard to match the VL70m. Because the master keyboard's MIDI Out is passed through the VL70m, it is automatically merged with any breath data before being recorded by the sequencer.

For playback, the switch automatically routes the master keyboard directly to your sequencer, allowing you to record sequenced parts using other modules, and the VL70m is connected onto the end of an existing MIDI Thru chain or to its own sequencer MIDI Out. The VL70m can thus play back the recorded data, including any breath controller parts, without causing a MIDI feedback loop.

Using a VL70m without breath control is like using a synth with no pitch‑bend, vibrato or aftertouch, but 10 times worse. If you're not going to use the breath controller, you either have to get very nifty at using other MIDI controllers instead, or resign yourself to the fact that it's going to sound rather flat. Even though Yamaha don't make it easy to rig up the breath control, it's worth persevering because the VL70m really is a fabulous instrument with it.

If you don't like the idea of soldering up switch boxes, you can always pay a local electronics enthusiast to do it for you. All you need are five 5‑pin, 180‑degree DIN sockets, a suitable 6‑way changeover switch, a plastic project box and some wire. The whole thing shouldn't cost more than around £15, and it'll make using your VL70m so much easier. If anybody else has come up with a novel solution to this problem, please let us know and we'll print it.

One other tip is to unplug the breath controller before you play back a sequence, otherwise any audio picked up by the mouthpiece will merge with the existing breath data and track playback will be disrupted.