Recent disturbances in the space-time continuum gifted our columnist an unsettling vision of Oxford Street, circa 2014. 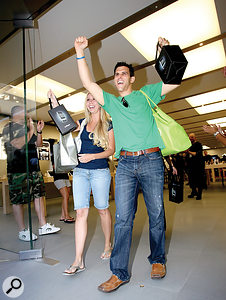 "At last! We have everything we need to make the movie of our lives! Plus we got to meet Stephen Fry!”

Hi there, and welcome to the Apple Store!

Do you like my blue polo shirt and my tattoos and sharp emo earring that make me look that little bit more cool and edgy than other shop assistants? You like how my Converse trainers are so falling apart they can't possibly be considered suitable for work, unless, of course, they were intentionally shabby? You noticed that too, huh? Yeah. Perhaps I come across as a counter-culture subversive who doesn't take orders? Or maybe I'm just an obedient hipster who sells iPods to confused housewives. Maybe we'll never know.

And you're a musician? A media composer? That's great. So you'll be interested in the new iPad 5 with front and back retina screens, right?

No? You're still a desktop machine user? Cool. Keeping it retro. So if you're into classical music and stuff, you'll love the analogue synths in the new version of Garage Band Pro. We had a producer in here last week who worked with Jay-Z on his latest album. And they recorded, mixed and mastered it entirely on an iPod Shuffle. It's incredible.

What? You don't use Garage Band Pro? Logic? Oh yeah, I remember that. They discontinued that a few years back. It was dropped just after the final version of Final Cut Pro Final. Users told us Logic was really ugly and the user interface was clunky, and it relied too heavily on other developers' plug-ins and complex music theory stuff, so in order to make it better, we took all the best bits from Logic that our customers are going to love on their iPhones (the ES-P, the ES2, Ultrabeat and Silver-Verb) and built it right into Garage Band Pro. It's so cool. It comes with all the melodies you're ever going to need already programmed in. It takes a snapshot of your Genius listings from iTunes and boots up with a mathematically averaged melody that fits perfectly with your music tastes over the past three weeks. It's like having another band member help you write the songs. The guys told me its development code-name was 'Ringo'. How awesome is that?

I don't know if we still sell additional hard drives any more, to be honest. I mean, all our products now come with enough storage space for the small number of your movies and photos that aren't up in iCloud, so none of our hardware is user-accessible. But if you do need any more storage, book an appointment at the Genius Bar and we'll sort you out with some memory sticks. Radical.

Hey, if you're a desktop user make sure you check out the new OS 10.9 Cougar. It's amazing. We've completed the migration to a fully iOS environment now, so no more messing around with user-editable files, documents, folders or any of that rubbish clogging up your computer. Everything you create and all the ideas you have just get automatically uploaded right into our new personalised App Store for safe keeping, and we allow you to access those files from any device you log into. It works like magic. And we don't even charge you for accessing your stuff either — apart from movies, music, audio files, and some larger photos, obviously. It's features like this that our professional customers are going to love. And it's all just so shiny!