We all want our names to be associated with famous TV programmes, right? Well, it depends what they're famous for...

It's two weeks before Christmas, and I'm racing down the motorway towards London. I'm driving much faster than I probably should, but unless I can meet the producers at the BBC before 6pm, I won't get the gig. The meeting I am racing towards concerns a reboot of a show that ran for 19 years, across some 20 series. In the TV world, established franchises are big business, and a format that has ingrained itself into the national psyche represents a much safer bet than something new. In short, this is about as big a deal as telly programmes get. I make the meeting in the nick of time, speak with the team making the programme, and on the way back, I'm already booking session players and singers and blocking out my time to get the job done.

In The Deer Doo

Once finished, my new arrangement of one of the most recognisable TV themes ever was very well received. The producers were over the moon, the theme's original composer expressed his delight, and everything was looking good. For a laugh, I even went to the filming of the pilot episode at BBC Television Centre, which in a wonderfully unscripted nod towards classic BBC heritage, featured a troupe of 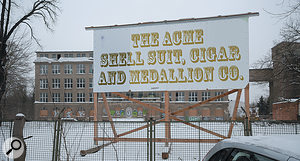 Management were unable to explain the sudden decline in export orders from the United Kingdom which eventually forced the company's closure.reindeer that pissed on the studio floor and made their handlers slip all over the place. It went well, which meant the prospect of a full series commission looked like a dead cert. In fact, when the pilot episode aired, the only downbeat note came from the Daily Mail's review, which described my music as a "Butlin's cabaret reworking” of the original theme. It didn't matter, though — because, as someone enthusiastically pointed out to me at the time: 'Who doesn't have fond memories of Jim'll Fix It?'

Shortly afterwards, it emerged that the show's original host was one of the most prolific sexual offenders the country had ever seen. Distancing myself from the job was as easy as trimming my showreel. Others weren't so lucky. Possibly suspecting there might be some post-mortem shenanigans, at his request, Savile had been buried in a coffin that was encased in concrete, and his carcass was composting in the ground long before production on the remake began. Although none of the producers I worked with on the show had ever met Jimmy Savile, or been involved in any of his previous programmes, or even been in the TV industry when they were last on screen in 1994, the fallout ended a large number of careers and almost brought the entire Corporation to its knees. And it isn't over yet.

It Couldn't Happen Again, Could It?

Set against the sum total of misery Savile caused in his lifetime, my minor career embarrassment by association with a man I never met and whose programmes I never worked on barely warrants a mention. But it does demonstrate that, like it or not, we are all slaves to the slings and arrows of outrageous fortune. Learning to put good luck into the same context as bad luck is a real life skill and, important as we might like to think we are, each of us is merely a small cog in a much larger machine. It's a pitiless machine, and all of its constituent parts get judged equally. If you are happy to bask in the reflected glory of a project that went well, you can't really expect to be hidden from any negative consequences that emerge. Even when a person named in the title of a project you contributed a small part to later turns out to have been a vile, subhuman rapist in a shell suit.