We might be used to rapid technological change – but is our audience?

The ubiquitous quarter-inch jack plug dates from 1878, when it was first used in manual telephone exchanges by operators to connect callers via a switchboard. At nearly 140 years old, it is almost certainly the oldest electrical standard connector still in common use. If you've ever plugged an electric guitar into an amplifier you are using a form of Victorian technology that predates Albert Einstein, the light bulb and the gunfight at the OK Corral. It's interesting to think that, in terms of size and shape, the plug on the end of your studio headphone cable 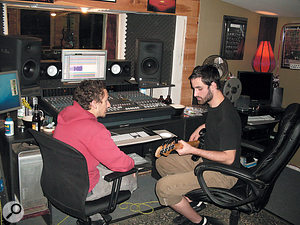 "Yeah, I replaced the jack socket with an original 1878 brass one, it sounds so much more vintage now.” was in common use while Tchaikovsky and Charles Darwin were still alive, and apart from spawning its smaller 3.5mm cousin, it hasn't really evolved since. Why? Because it doesn't need to. The quarter-inch jack plug is the very definition of something that shouldn't be fixed, because it ain't broke. If, however, it does break, it can be easily repaired by any 12-year-old with a soldering iron. I guarantee you there will be jack plugs in your studio right now that will outlive you.

Set In Our Ways

In the media world it's important not to forget that most people find the pace of technological change intimidating rather than exciting. Sound On Sound readers will likely be early adopters for many forms of technology, but we really are a tiny minority. We might like to think we live in a world of On-Demand, iPlayer, catch-up and streaming content to mobile devices, but a recent study of British television viewing habits showed that 88.7 percent of all programmes are still watched live on a TV set as the show is broadcast. This is only one percent down on the figure recorded two years previously, suggesting that TV schedules are still far from being a thing of the past. And we are watching more of it: average TV viewers consume 12 minutes more each day than we did 10 years ago.

A friend knew someone who has rigged up an old VHS camera to film his laptop screen showing different iPlayer programmes, and posts the tapes to his grandad who simply "can't be bothered with technology any more”. And that's just about the most charming thing I've ever heard.

Knowing your audience is the most important skill that programme-makers can have. TV tends to be made by funky, young and dynamic creative people, but tends to be consumed by people who would be surprised to find out that the presenter of their favourite show is not, in fact, quite as verbally effervescent in real life as she appears on screen, and is instead reading all her lines from an auto-cue fed by a team of people whose names no-one will ever know from a Portacabin outside the studio in a rainy car park.

As the creator of the musical component of the TV experience, it's sensible to keep in mind that the overwhelming majority of TV viewers value words like 'comfortable', 'accessible' and 'familiar' above words like 'artistic', 'contemporary' and 'different'. We hunger for the latest soundware releases and cutting-edge synth plug-ins but, just like our clients, we too have to balance the desire to be new, daring and creative in our work with the perils of being too new, too daring and too creative.

Remember the old 3.5-inch floppy disks that ancient computers and samplers used ages ago? In 2009 Sony alone sold 12 million of the things. Tastes change and we must lead that charge, but it's wise to proceed with caution.