“Thou art as fat as butter!”

“Thou hast in thy skull no more brain than I have in mine elbows...”

“Thou smell of mountain goat!”

Shakespeare was terrific with insults. I suspect this was largely due to the fact that, as a writer for hire, he would have amassed over years of receiving critical feedback from those commissioning him a vast catalogue of ignorance, scorn and indifference that he could just drop verbatim into his plays.

I’ve written before that composing music for media requires a thick skin. Only the most rhino–like among us could possibly hope to maintain any kind of self–worth while working at the coalface of bespoke music production, the central problem being that the people commissioning you are simultaneously the most and least qualified people to offer feedback of your work. They usually know no more about music than the average iTunes user. They of course, like everyone else, know what they like and enjoy it when it works, but usually have no idea how it’s made, how easy or expensive the different elements are, or what changes need to happen in order to shape and adapt it for their very specific needs. Nor should they be expected to know any of these things. 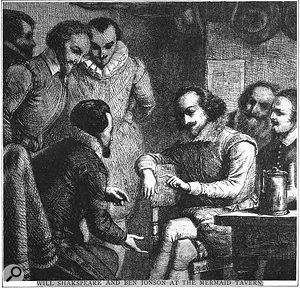 They are closer to their project than you, and as such, are vital at guiding you to give them what they need. And of course the vast majority of the feedback they deliver will be offered when something isn’t working quite as it should.

It Is What It Is

I was struggling recently with a producer who wasn’t getting what he needed from some music I’d sent him. He flailed around on the phone for a bit, spitting adjectives and trying to explain why my music wasn’t “hitting the right notes”. He tossed in a few desperate phrases like “demographic audience cohesion”, “synergy” and “Kasabian” until, at last, he exasperatedly announced “It just sounds like telly music!” A man’s reach probably should exceed his grasp, and I could only assume in his mind he was working on Lawrence Of Arabia instead of a Channel Five documentary about farming, but to insult something by describing it as being like the thing it self–evidently is strikes me as funny.

“Thou art the son and heir of a mongrel bitch!” is a good insult.

“Your last demo just sounds a bit... library,” packs less of a punch.

Don’t Beat About The Bush

Of course I’m not suggesting that TV composers have it tougher than any other professionals. I imagine people with real jobs in the armed forces, police, healthcare and service industries could beat me any day in a game of Difficult Customer Top Trumps, but the ones who survive the longest in our career seem to have that curious combination of being sensitive enough to create something as fragile, personal and delicate as a piece of music, yet robust enough to put up with having it ignored, trampled on, edited beyond recognition, swallowed in the mix by voiceover and described by your customers as “far too 1980s”.

In Titus Andronicus, Aaron the Moor announces to the Goth Prince Chiron “Villain, I have done thy mother,” marking Shakespeare as the author of one of the earliest literary references of a black man using ‘motherfucker’ as a smackdown 400 years before Samuel L Jackson started his Twitter account. As an insult it’s brutal, funny and succinct in equal measure. And personally I’d like to hear more of this kind of directness from people commissioning music from me, because there is nothing more confusing than being in a meeting with a daytime TV producer talking about the music you’ve composed for their daytime TV show and to hear them asking “Can you make it sound a bit less day–timey?”