Notes From The Deadline: January 2016 Column 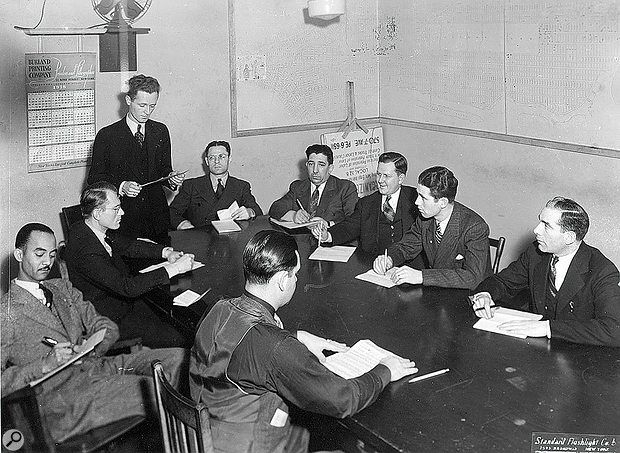 It’s easy to ignore the question “Is it any good?” — but job satisfaction lies in keeping it in mind.

There’s a web site (https://crowdsound.net) on which about 45,000 people are currently in the process of writing a song. Starting with a basic C/G/A-minor/F structure which repeats 18 times, users cast votes on which note should come next, generating a truly crowd–sourced melody. As social and musical experiments go, it’s all tremendous fun — but as you might have guessed, it’s not very good. In fact, it’s completely bland, soulless and turgidly unmusical. Melodically speaking, it’s about as thin as a short–haul air hostess’s smile. And what’s even better is that when they’ve finished with the melody users are going to start writing the lyrics through word–by–word consensus. Once the Internet trolls catch wind of it all, it will probably end up being a touching love song about Nazi kittens with big tits riding unicorns that shit glitter. Thanks Obama.

Catchy If You Can

The list of ‘must–have’ adjectives you can regularly expect to receive in relation to your work could fill a thesaurus, but the most horrifying type of feedback a composer can receive is “Can it have a more catchy melody?” Like the movie exec who sends the script back to the writer with a note in the margin saying “It needs to be 30 percent funnier,” it makes your mind flip back and forth between despair at the ham–fisted ignorance of your clients, and the creeping realisation that, when it comes down to it, you are really just not very good at making music.

The musical haikus we create for a living have to be succinct and immediately impressive. If you are lucky, you might have 20 seconds to establish the tone, intention and essence of a TV programme. It has to be memorable, inevitable, and made out of the kind of instrumentation that appeals to the type of viewers the programme is hoping to attract. And they won’t pay you until you’ve already done it and beaten off competition from six other composers, all throwing demos at the producers.

All This And Art Too

As has been pointed out many times, the camel is the horse designed by committee; and, as New Jersey Congressman William B Widall observed in the ’60s, “The elephant is the mouse built to government specifications.” Trying to balance the function of a piece of music with the desire to bring some art and originality to the party is no mean feat and its being any good often comes second to the long list of structural and stylistic requirements specified in the brief. In fact, given the exacting requirements and the number of people that can (and do) pass judgement on your work before it is finally approved, it’s a wonder we get it right as often as we do.

There is a maxim in architecture which states that ‘form follows function’, and as far as commissioned music goes, the feel and sound of a piece is usually rigidly informed by the job we’ve asked that piece of music to do. Musicians tend to be musicians in the first place because they hate being told what to do and when to do it — and this job is entirely about being told what to do and when to do it. However, if the confines of the tiny frame don’t scare you, and if you can manage to be succinct, immediate, thick–skinned, resourceful and determined, you might just be able to smuggle some art, originality, creativity and soul into what you do. And sneaking some of that past the powers that be is one of the most rewarding tricks you can pull off.