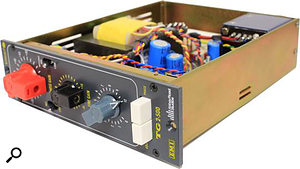 We reported on the announcement of the Chandler TG2-500 back around NAMM time in January, and the 500-series version of the classic TG2 preamp is now available.

Chandler specialise in recreating gear based on British EMI circuit designs that date back to the late '60s, first used in the TG series of consoles used in Abbey Road Studios. We reviewed the Chandler TG Channel back in January 2005, and it's the preamp section from this unit that is put to work in the TG2-500. The TG2-500 builds on the reputation of TG2 preamp to deliver the classic sound of Abbey Road’s TG12428 pre amp, used in the studios’ recording and mastering consoles in the 60s and 70s—in the 500-series format.

According to Chandler, the frequency response of the TG2-500 is identical to the TG2 and has the same high frequency bump and mid forward tone, along with the warmth-inducing distortion which contributes to its sound.

The TG2-500 is available to order now. For pricing and to find your nearest dealer, please visit ChandlerLimited.com.