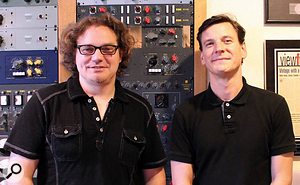 During the 1950s, ‘60s and ‘70s, Abbey Road Studios helped the EMI Record Engineering Development Department create some of the finest recording gear in history, most of which was only available to EMI Studios and was never sold commercially. That is, until Chandler started recreating the designs of the EMI/Abbey Road Studios recording equipment over a decade ago.

The official products currently on the market include the TG1 Limiter, TG2 Pre Amp/DI, TG Channel MKII, TG12345 Curve Bender EQ  (http://sosm.ag/sep10chandler), TG12413 Zener Limiter and the newly released TG2-500 Pre Amp in the 500-series format. According to Chandler Limited’s Chief Designer Wade Goeke, there’s much more in the pipeline, such as REDD and RS units, as well as new products in the TG line.

Keep an eye on the SOS News pages as well as our website and social media channels for more news on the fruits of this continued collaboration.