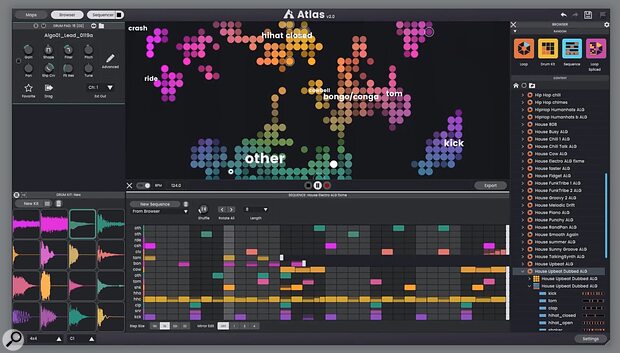 Two years ago, we reported on a new drum-sample manager called Atlas, from New Zealand-based software company Algonaut. Rather than demanding that the sample creators or users provide their own metadata, Atlas uses AI to analyse your samples automatically, and then creates a 'map' of them (hence the name 'Atlas'), based on instrument type (hi-hat, kick, snare, etc) and timbre. Thus, if a sample you're using is nearly (but not quite) what your track needs, you can simply browse for another nearby sample in the same category.

Now, Atlas has now gained version 2 status. Described by Algonaut as a “massive update”, Atlas 2 adds an integral drum sequencer (previously you had to do all the sequencing yourself using your own DAW tools), a Sample Variation/Humanisation system, and an enhanced Content Browser that Algonaut say makes it even easier to manage your kits and sequences and to swap out kit parts on the fly.

Algonaut's Atlas 2 is available now, and costs $99. Upgrades from Atlas 1 are priced at just $19, and a free trial is also available.