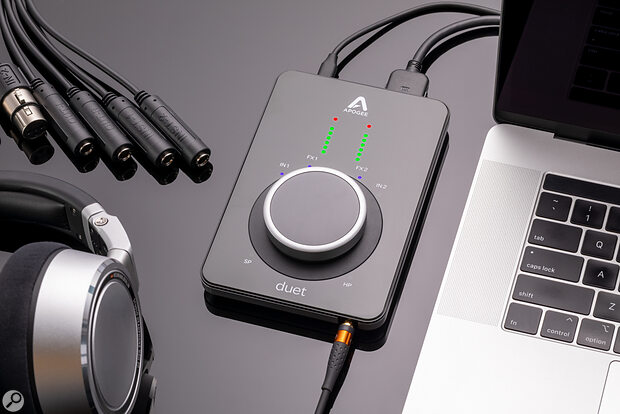 Apogee pioneered the desktop interface format way back in 2007, with their original Firewire Duet. The concept of a combined interface and monitor controller/encoder has since become hugely popular, with companies like Focusrite, RME, Zoom and many others adopting the same form factor. Apogee themselves issued an updated version in 2012 (the Apogee 2, a USB 2.0 device), and now they've done it again, with an all-new Duet that maintains the fundamental 2-in/4-out format, but in an even sleeker glass and aluminium chassis, and incorporating its own DSP.

The Apogee Duet 3 can work on both Windows and Mac OS, connecting to computers via USB‑C. It sports the same I/O configuration as its predecessors: a breakout cable gives you access to two mic/line/instrument inputs (with up to 60dB of gain available from its mic preamps), plus stereo monitor outputs, while a front-panel headphone socket lets you monitor on the move — a very viable option, since the Duet 3 is bus-powered. The all-important rotary encoder remains (but gains a natty purple backlight), and this allows you to set your monitor and headphone levels, and also to adjust preamp gain.

Internally, a DSP engine lets you run Apogee's Symphony ECS Channel Strip (sold separately) with zero latency, so that you can either apply EQ and compression to your foldback mix, or print the processing as you record.

Neat freaks may also opt for the new Duet Dock, which replaces the breakout cable with a desktop-friendly set of 'proper' I/O.

The Apogee Duet 3 will go on sale in July, priced at $599. The Symphony ECS Channel Strip plug‑in carries a full price of $99, but can be bought with the Duet 3 for the discount price of $49, while the Duet Dock is set to sell for $149.