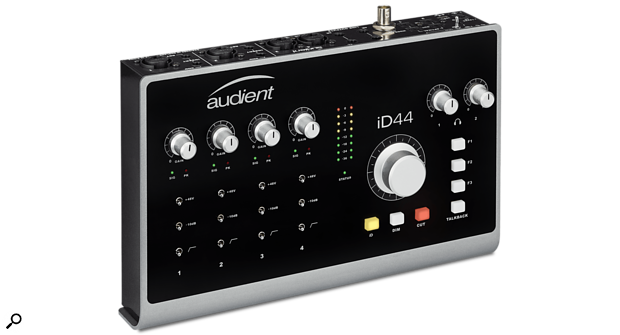 Traditionally best known for their professional analogue studio consoles, Audient have won plenty of friends in the home studio world with their iD range. These compact and solidly built USB audio interfaces offer excellent sound quality for a reasonable price. The new iD44 is the biggest yet, providing four Class-A mic preamps and plenty of scope for expansion via not one but two sets of ADAT optical inputs and ouputs.

With a potential 20 inputs and 24 outputs, the iD44 offers more or less double the I/O capacity of the range’s previous top dog, the iD22. Though it largely follows the format of that desktop unit, the new iD44 boasts a number of subtle enhancements, including a larger LED level meter, talkback functionality in the monitoring section and two discrete JFET instrument inputs and two headphone outputs conveniently located on the front edge of the metal enclosure. All the other connections are at the rear, where you’ll find the four main mic/line inputs — two of which boast balanced insert points where you can patch in an outboard EQ or compressor, for example — plus four balanced line outputs, a word clock out and the ADAT optical ports. These allow the user to potentially add up to 16 more input channels, using something like Audient’s ASP800 and ASP880 eight-channel preamps with built-in A-D conversion, which are designed for precisely this purpose. The unit also retains the neatly implemented DAW control features found in the rest of the iD range, with three user-programmable function buttons and the ‘Scroll Control’ feature, which turns the iD44’s large level knob into a mouse scroll wheel for adjusting on-screen parameters. Compatible with both macOS and Windows, the iD44 should be available very soon, priced at £499$699.