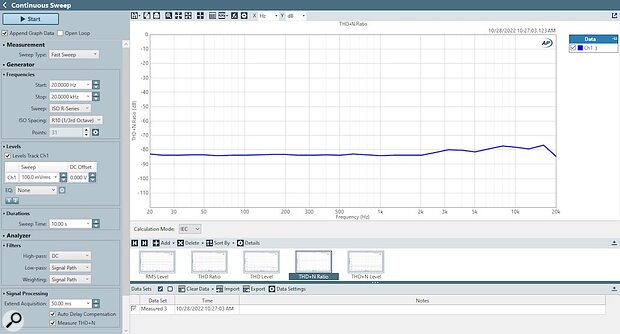 Audio Precision have announced the release of version 8.0 of their APx500 Measurement Software, which implements a range of performance optimisations that reduce the time taken for the software to carry out measurements during tests.

Version 8.0 gives users access to THD+N results using the FastSweep stimulus in Continuous Sweep, Acoustic Response and Loudspeaker production tests. Audio Precision say that FastSweep’s stepped frequency signal sweep offers several advantages over a logarithmically swept sine (chirp) signal, including an ability to sweep from low-to-high or high-to-low frequency, a lack of transient ripples at low or high frequencies, as well as support for measuring harmonics above the 20th, and precise control over the number of discrete points used in measurements. Updates to the software’s Bose SoneTrac functionality are also included, allowing users to experience more refined control over signal processing during the detection of rub and buzz defects.

“Version 8.0, along with our regular cadence of enhancements to APx500 software, allows users to take advantage of measurement scalability and efficiency, and benefit from as much as a 40% saving in test times. This upgrade reinforces our philosophy of delivering a continuous program of improvements that not only saves customers time and money, but also increases the value of their new and existing analysers.” - Daniel Knighten, Audio Precision General Manager

Users are able to download APx500 Version 8.0 now by logging into their account on the Audio Precision website. The site also provides the relevant pricing information for different upgrade paths.