Following the success of their OC18 and OC818 large-diaphragm capacitor mics, Austrian Audio have introduced a new small-diaphragm model called the CC8. The capsule used in their larger mics was a modern interpretation of AKG's CK12 design, and the OCC7 capsule in the new model is likewise inspired by an AKG classic: in this case, the CK1 cardioid capsule that was often paired with the C451 and C452 bodies back in the day.

Austrian Audio CC8 microphoneHowever, the new microphone is much more than just a recreation of the C451! The capsule itself features several innovations, most notably the use of 3-micron thick polyethylene napthalate (PEN) as a diaphragm material; this is said to be more robust than conventional alternatives such as Mylar. Other neat developments including the use of a new filter fabric across the capsule's side vents help to deliver a very accurate cardioid polar pattern.

The CC8 boasts an impressively low self-noise figure for a small-diaphragm mic, at only 16dB SPL (A-weighted), and thanks to the two-stage onboard pad, can accommodate sound pressure levels up to a wince-inducing 156dB SPL. Both the capsule and the transformerless electronics are claimed to be outstandingly linear, and if that means picking up unwanted rumbles, there's a switchable 12dB/octave high-pass filter that can turn over at 60 or 120 Hz.

As with the earlier OC-series models, Austrian Audio have also succeeded in massively improving manufacturing consistency compared with older AKG mics! Every mic is tuned before it leaves their Vienna factory to have a frequency response and sensitivity that is within ±0.5dB of the reference standard. This means that there's no need for pair-matching for stereo use: any two CC8 mics can be considered 'matched'. 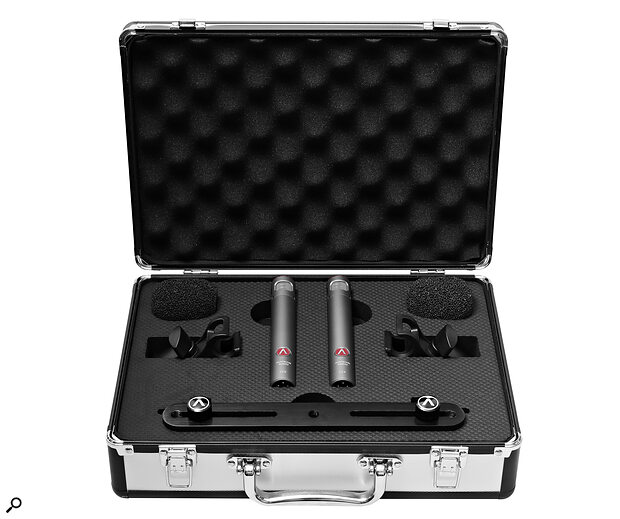 The CC8 will be available in October in Europe and elsewhere in November. It is set to retail at £359 (US$479) for a single mic or £719 ($949) for a stereo set that comes in a smart attaché case with a stereo bar and mounts. Expect an SOS review as soon as we can lay our hands on one!