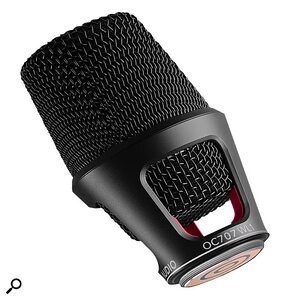 Austrian Audio have released the OD505 WL1, and the OC707 WL1, bringing the capsules featured in their OC505 and OC707 vocal microphones to users of Shure’s radio mic systems.

We reviewed the OD505 back in the March edition of the magazine, click here to check it out. As with the original microphones, both of these capsules utilise Austrian Audio’s Open Acoustics Design, which the manufacturer says makes an “exceptionally open and transparent sound possible”. Other benefits of the design are said to include reduced susceptibility to pop noise thanks to an innovative pop diffuser, and no change to the sound or feedback behaviour when gripped directly on the microphone head grille.