Registration for B-Side Project 2017 is officially open, marking the seventh consecutive year of the renowned, global remix contest. Musicians, singer-songwriters, bands and composers of all genres are invited to enter at www.b-sideproject.org before 30th June. Fifty original tracks will then be shortlisted and paired with registered electronic music producers from around the world, to remix these tracks before the 31st October deadline. The B-Side Project, now officially in association with Sound On Sound, and sponsored by Prism Sound for a third year, creates networks between musicians, producers and the wider industry. If offers musicians real world opportunities to release their music and gives access to platforms to help boost those artists’ careers. 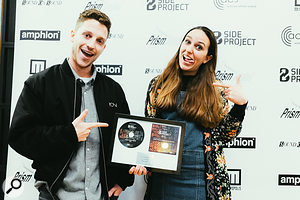 Judge Hugh Hardy (Hospital Records) presenting award to Bettina on behalf of The FAYR for his remix of her track 'Far Away' .The winner of ‘overall best remix’ can expect a glittering array of prizes and opportunities, worth over $20,000, including, a Lyra Pro Audio Interface (also awarded to the musician / band who entered the original track), acoustic treatment from GIK Acoustics, a mic and headphones from Shure, custom-made ear protection from ACS, product from ROLI and more! Individual awards can be won plus the chance to gain record releases — a huge opportunity for both original artists and remix producers.

The winning producer will be invited to watch their track being mastered at the legendary Metropolis Studios in London, where artists such as The Rolling Stones, Paul McCartney, Paul Weller, The Who and Amy Winehouse have all recorded. Each of the original and remix tracks in the top 10 will be mastered at Metropolis and featured on an album to be digitally released on B-Side Recordings (distributed by Republic of Music), in early 2018.

Last year’s B-Side Project saw 400 entrants from over 40 countries take part in a competition of the highest standards. In 2017 expect even more entries and the bar to be raised yet further, with the winner revealed at an awards event at Metropolis Studios in London in December. This event will also be streamed live on the internet offering wider exposure for the winner.

With the help of industry sponsors and partners, this year including Prism Sound, WhoSampled, 8Stem, Minirigs and more, B-Side Project has helped numerous producers and artists since its start in 2009. 2014 winner Hugh Hardie is now signed to Hospital Records and continues to enjoy a successful career. He joins the judging panel again this year.

The judging panel is an indicator of the high regard in which B-Side Project is held within the industry. Last year’s judges are returning, including Roni Size, Utah Saints, Hugh Hardie, Matt Schwartz, Cut La Roc, Nu:Tone, Estelle Rubio, Talvin Singh, Studio DMI’s mixing and mastering virtuoso, Luca Protelesi, plus Grammy Award winners, La Roux. In addition to this wealth of experience, also joining the panel for 2017 are chart-topping Clean Bandit, grime and hip-hop producer S-X, as well as Claudio Passavanti, founder of Doctor Mix and Sunlightsquare Records, plus Subpop founder Bruce Pavitt with his 8Stem co-owner Adam Farish.