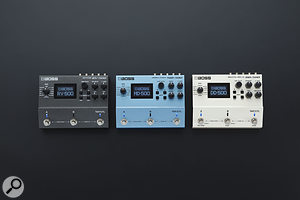 The original Boss DD-500 (right) is joined by two new pedals in the series: the RV-500 and MD-500.Boss have today announced two new effects pedals for guitarists: the RV-500 Reverb and MD-500 Modulation; a battery powered practice amp called Katana-Mini; and a multi-effects unit for bass, dubbed the GT-1B.

The RV-500 Reverb and MD-500 Modulation both feature 32-bit/96 kHz AD/DA and deep programmability, and share the basic design of the companion DD-500 Digital Delay — a best-seller that’s has been lauded for its great sound, powerful editing capabilities, intuitive interface, and expressive real-time control.

The RV-500 ($350)(£339) features 12 modes and 21 reverb types, and all include sound-shaping parameters like modulation, ducking, and EQ. On tap is everything from standard reverbs to shimmer, non-linear, fast decay, SFX, and more, plus recreations of the classic Roland SRV-2000 and RE-201 Space Echo. Thanks to souped-up DSP, players can access a full-featured digital delay with modulation along with every reverb, and even use two patches at once with ‘Simul’ mode.

The MD-500 ($350)(£339) meanwhile, provides 12 modes and 28 different mod effects. Included are Boss’s famous chorus and Roland’s legendary Dimension D, plus flanger, tremolo, phaser, vibe, slicer, ring mod, and more. Many effect modes include advanced Prime variations newly developed for the MD-500. As with the RV-500, ‘Simul’ mode enables the use of two patches at once, while the Insert Loop function lets the user position mod effects around external pedals.

Free editor/librarian software is available for both the MD-500 and RV-500, allowing users to edit sounds and organize patches on a computer via USB. 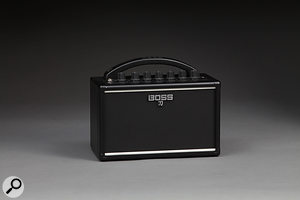 Boss’s latest addition to the Katana guitar amplifier series is the Katana-Mini — a portable, battery-powered and affordable practice amp (£89)($100) aimed at bedroom players, home hobbyists, through to traveling and recording guitarists.

The amp weighs just under three pounds and is equipped with a Phones/Rec Out with cabinet voicing, for quiet practice or recording. The amp is also equipped with an Aux In jack for jamming along with music from a smartphone or other playback device. 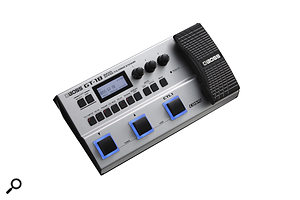 The final announcement from Boss today is the GT-1B Bass Effects Processor: a compact multi-effects unit for bassists ($200)(£189). It features 90 effects including 13 different preamp types, all specially tuned for bass. Among these are a selection of premium effects that use Boss’s advanced Multi-Dimensional Processing (MDP) to maintain an instrument’s natural character and response. A dedicated looper is included as well, providing a useful built-in tool for jamming and spontaneous creativity.

The GT-1B is designed to be light and compact, yet rugged, and can be powered either via AC or battery. If you want a hand with patches, the Boss Tone Central website gives GT-1B users access to many free patch collections created by pro bassists. The free Boss Tone Studio software provides a full-featured editor/librarian for the GT-1B, as well as integrated access to all the patch collections at Boss Tone Central.