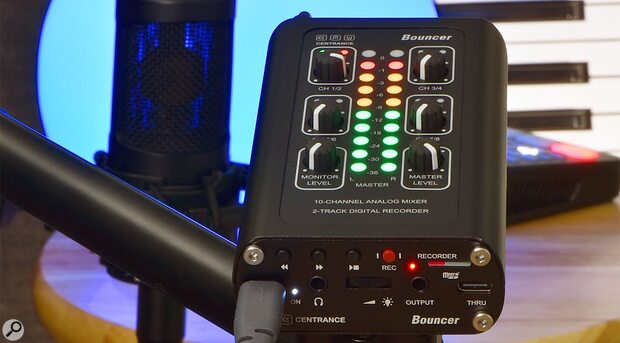 CEntrance have announced the upcoming release of Bouncer, a compact 10-channel line mixer with an integrated digital recorder. The device promises to fill an important gap for synth performers, DJs and live musicians who need to mix several stereo sources, especially on smaller stages where space constraints make the use of a larger mixer and recording system impractical.

Bouncer’s built in recorder allows users to record a stereo mix onto a MicroSD card. Recording quality is fixed at 24-bit/46kHz, and cards with up to 256GB of storage are supported, offering a maximum recording time of over 10 days. Designed with live performance in mind, the device features CEntrance's One-Touch recording system which offers dedicated tactile controls placed on the front panel. Due to the focus on providing quick and intuitive operation, the company have purposely avoided the use of any screens or menus.

The unit is equipped with five stereo line-level inputs, which are provided on 3.5mm mini-jack connectors on the rear panel. Another pair of 3.5mm connectors on the front panel provide a headphone output and a stereo line-level master output. A main level meter in the centre of the top panel utilises CEntrance’s proprietary Sticky Peaks technology, which combines both VU and peak metering to display average and peak levels at the same time, helping users to maintain safe recording levels and avoid clipping.

The first eight input channels feature dedicated signal indicator LEDs and level controls on the top panel, whilst the last two inputs require the volume to be set on the source device. CEntrance say that these channels could be used to connect the output from another Bouncer, increasing the total number of input channels to 18. 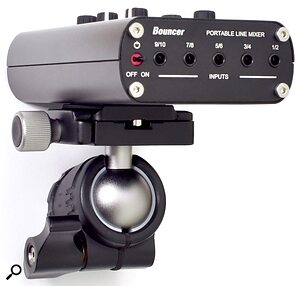 Power is delivered via a USB-C connector, which accepts a standard 5V supply from any USB charger or power bank. An additional USB-C connector labelled Thru also allows the Bouncer to pass power to other devices in CEntrance’s Modular Signal Processor series, which include a microphone preamp, compressor, and EQ which all share the Bouncer’s compact, modular form factor.

A camera-style mount provides compatibility with a wide range of hardware mounting accessories, allowing the device to easily be attached to desks, keyboard stands, drum hardware, music stands, and more.

Bouncer will be available in December 2022, priced at $599.99. More information is available on the CEntrance website.