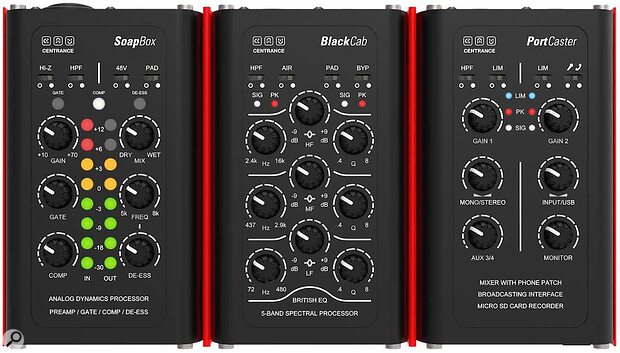 Portable recording specialists CEntrance have announced the release of the English Channel, a bundle that comprises the company’s SoapBox, BlackCab, and PortCaster devices along with a custom desktop enclosure. When combined, the units provide a microphone preamp, dynamics processing, and three-band parametric equalisation alongside a built-in SD Card recorder and audio interface.

The SoapBox features a microphone preamp capable of providing up to 70dB of gain, with switchable high-pass filter, phantom power, pad, and Hi-Z functions. There are also a range of dynamics processors included, with the device sporting a gate, a VCA-based compressor, and a de-esser. An input is provided by an XLR/TRS combo socket, whilst an output is offered on an XLR connector. A pair of large LED meters placed in the centre of the SoapBox’s top panel provide a visual indication of both the input and output levels.

CEntrance’s BlackCab offers three bands of parametric equalisation, with ±9dB of gain available for each band. A second-order high-pass filter is also provided to combat unwanted low-frequency content, with some enhancement of high-frequency content offered by a switchable Air control. The device’s I/O is available on a pair of XLR connectors.

The PortCaster is based on CEntrance’s award-winning MixerFace, and has been developed with voice recording applications in mind. The English Channel bundle includes a special version of the device, the PortCaster R4S, which removes the battery and accepts power from a USB-C supply. In addition to the line-level I/O which provides integration with the SoapBox and BlackCab, the unit also features an additional two microphone preamps, allowing a total of three microphones to be connected to a British Channel system.

Audio can be captured directly by a built-in MicroSD card recorder, or passed on to a computer or mobile device via a built-in USB-C audio interface. Helpfully, the PortCaster R4S is capable of carrying out both of these tasks simultaneously, allowing users to record their audio whilst live streaming, for example. 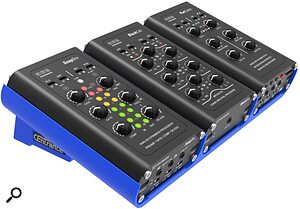 The devices in the bundle can all be housed within a new Commander Console desktop enclosure.

A custom enclosure, named the Commander Console, is supplied with each bundle, allowing the three devices to be fixed together in a single desktop enclosure. Power can be chained to each device, allowing all three of the units to be fed from a single USB-C power supply. Seven colour finishes are available for the enclosure, with users able to choose between Black, Grey, Gold, Red, Blue, Lime, and Lemon options.

The English Channel bundle is available to pre-order now, with shipping currently planned for January 2023. CEntrance are currently offering an introductory price of $1199.99, reduced from a full price of $1800.