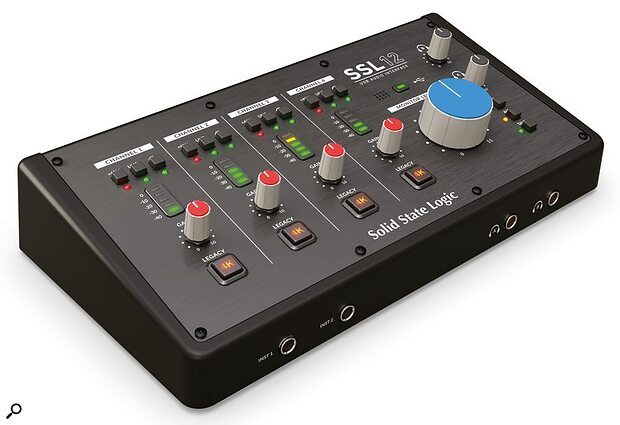 Each of the interface’s four preamps feature individually switched phantom power and high-pass filters, and are equipped with SSL’s Legacy 4K mode, which introduces some “analogue colour enhancement” inspired by the company’s legendary large-format consoles. Channels one and two will also accept high-impedance instrument signals, which can be connected via two dedicated quarter-inch jack inputs placed on the front panel.

Up to eight additional digital input channels can be accommodated courtesy of an ADAT input, and the interface also boasts MIDI I/O on a pair of five-pin DIN connectors. Four analogue outputs are provided on quarter-inch TRS connectors, which are DC-coupled, and so can be configured to send CV signals to analogue synthesizers. Lastly, the two headphone outputs are provided by a pair of quarter-inch jack sockets on the interface’s front panel.

Control over the interface’s main output level is provided by a large volume knob, which is joined by another pair of level controls that set the volume of the two headphone outputs. A Cut button provides a mute function, whilst an Alt button allows users to switch between two pairs of connected monitors, and a Talk button activates the built-in talkback microphone.

Usefully, some additional monitoring functions are available within the interface’s control software, including dim and mono functions, as well as the ability to invert the polarity of the left channel. The buttons on the device itself are also configurable within the software, allowing these additional functions to be assigned to a hardware button if required.

The SSL 12's inputs are provided on XLR/TRS combo sockets, with the outputs offered on TRS sockets. ADAT connectivity is present on a Toslink connector, whilst MIDI I/O is taken care of by a pair of five-pin DIN connectors.

The SSL 12 boasts some impressive specifications, with supplied dynamic range figures of 111dB for the inputs and 120dB for the outputs. The microphone preamps boast 62dB of gain, with an EIN figure of -130.5dB (A-weighted). The interface connects to a host computer via a USB-C port, and is bus-powered.

We’ve already been putting the SSL 12 through its paces here at SOS, for more details, take a look at our exclusive first review which has been released today.