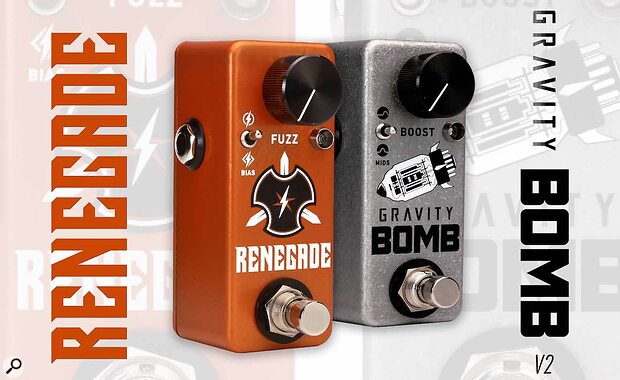 The Gravity Bomb is based around a high-quality Burr Brown op-amp and is capable of delivering 20dB of clean volume boost. Three different mid-range EQ settings are available courtesy of a toggle switch on the pedal’s top panel. In the centre position, the pedal behaves in the same way as the original Gravity Bomb, maintaining a flat and neutral tone. In the down position, the switch introduces a boost at 750Hz, whilst the up position boosts at 1kHz. CopperSound say that this makes the device a great tool for pairing with other pedals in order to give them a fresh tone and feel.

CopperSound describe Renegade as a simple, no-frills fuzz device with a compact and straightforward interface. The pedal is derived from the classic Tone Bender design, but with the addition of an integrated bias control. This provides two different bias voltages selectable via a toggle switch, which offers a classic, full bodied fuzz tone whilst in the up position, and a more modern gated fuzz sound in the down position. The company say that a key feature of the pedal is its long sustain, and an “electric sizzle” as the signal fades away, which is particularly prominent with the bias toggle in the down position.

Both pedals accept 9-18V power from a standard centre-negative DC power supply, and CopperSound say that they will deliver increased headroom and clarity when supplied with 18V. Inputs and outputs are of course provided on quarter-inch TS sockets, and both the Gravity Bomb V2 and Renegade are equipped with mechanical true-bypass switching.

Both pedals are available now from authorised dealers or directly from the CopperSound website. The Gravity Bomb V2 is priced at $129, whilst the Renegade costs $149.