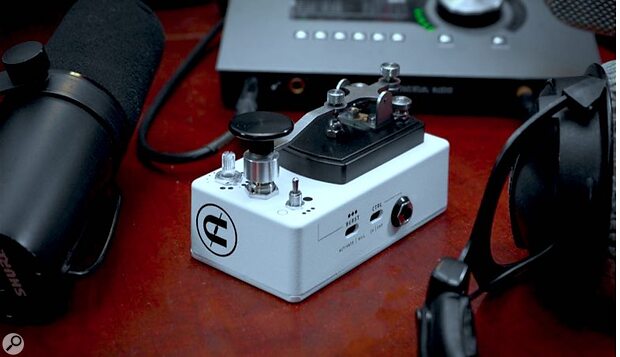 CopperSound Pedals have announced the release of the Telegraph V2, the successor to their popular Telegraph Stutter auto-stutter and kill switch pedal. Equipped with a sturdy metal switch mechanism that enables either hand or foot operation and an updated circuit design that offers a new Burst mode, the pedal promises to provide players with the ultimate stutter and kill switch system.

Telegraph V2 retains the two operation modes available on the original pedal: a Kill setting allows users to manually mute their signal using the footswitch, whilst an Activate mode will only allow audio to pass with the switch engaged. The newly introduced Burst mode offers an automatic tremolo-like stutter effect, with an adjustment range that spans from 110BPM to “astonishingly fast”! The effect can either be latched with a quick press of the footswitch, or set to momentary, where it will be triggered only whilst the switch is held down. For those who only wish to use the momentary function, an internal DIP switch is provided to disable the latching mode.

A Polarity toggle switch on the side of the pedal allows users to modify the behaviour of the Burst mode. A Kill setting will pass the user’s clean signal and engage the burst effect when the switch is pressed, whilst an Activate option will mute all audio until the switch is pressed, allowing the user to trigger controlled bursts of sound. In addition to being set by a dial on the pedal itself, the rate of the Burst mode can be controlled externally via an expression pedal, or synced to a CV clock source.

The pedal’s audio I/O is provided on a pair of quarter-inch TS sockets, with a third present to accommodate CV inputs. A quarter-inch TRS socket allows the connection of an expression pedal, with CopperSound Pedals recommending units with an impedance of ≤ 10kΩ. The Telegraph V2 accepts 9V DC power from a standard centre-negative supply, and draws a current of 60mA. The pedal also features a power loss fail-safe, and will automatically revert to a bypassed state in the event of the pedal losing power.

The Telegraph V2 is available now, priced at $249.